Here are some stories to check out over the three day weekend:

The Glue - Grantland.  On Phil Hartman's key role at Saturday Night Live.  Watching The Simpsons marathon, Hartman's characters are ever-present in the prime era of that show.

DOJ adds divestiture Tyson's Hillshire purchase - PORK network. "Mergers, acquisitions and consolidation in the meat packing and processing sector typically raises concerns over loss of competition in the market, and in this case, the DOJ believes that if Tyson acquires Hillshire and retains Heinold Hog Markets, there would indeed be a significant loss of competition for purchases of sows from farmers, with the combined companies accounting for about one-third of all sow purchases"  A third?

The Boy with Half a Brain - Indianapolis Monthly. A boy and his parents who decide to have a portion of his brain surgically removed to try to end his seizures.

Ode to a F*cked Generation - Medium

Radical New Theory Could Kill the Multiverse Theory - Wired.  Way beyond me.

A twofer for Labor Day: Why Have U.S. Corporations Become Such Skinflints - LA Times, and In corporations, it is owner-take-all - Washington Post.  It is bad enough that most capital investment has gone to labor-saving technology, decreasing labor demand and devaluing labor, and then profits are overly allocated to capital, but then capital income is taxed at a lower rate than labor.  That is why we are so fucked.

America's coal heartland is in economic freefall, but only the most desperate are fleeing - Washington Post 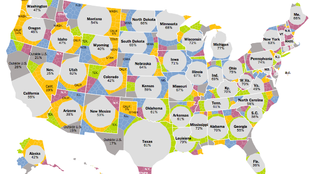 Warbird Pilot: Behind the Visor

Warbird Pilot: Behind the Visor from Rob W. Scribner on Vimeo. Email ThisBlogThis!Share to TwitterShare to FacebookShare to Pinterest
Labels: Ag economy, Do as I say not as I do, Fools and Their Money (Temporarily), News in the Midwest 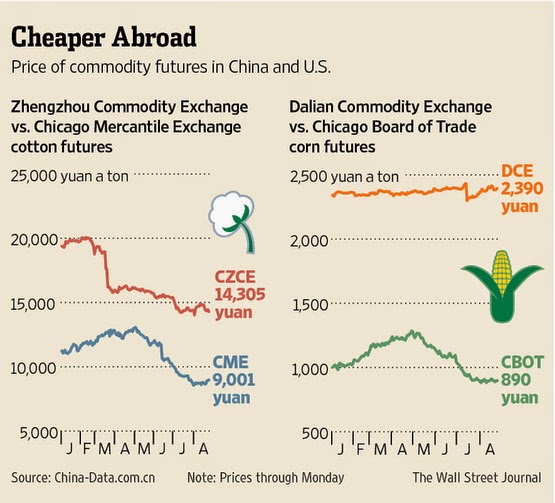 China's grain cupboard is overflowing.
As the harvest looms next month, the country is on track for an 11th year of bumper grain crops. But production is too much, even for the world's most populous nation, with warehouses bursting at the seams and posing a dilemma for policy makers.
Estimates from state media say the government will be sitting on 150 million tons of grains that include three of the most important crops for China: rice, wheat and corn. That is double the 75 million tons last year and adds to an oversupply of these agricultural commodities that is pressuring prices lower.
"Chinese officials always talk about having a big harvest," said Fred Gale, an economist at the U.S. Department of Agriculture. "That sounds like a good thing, as they have been worried about supply keeping up with demand. But now, China seems to be struggling with surpluses of most of their commodities."
The glut of grains is being lauded in a country that grappled with acute food shortages and starvation as recently as a few decades ago. But China is paying far more than necessary to feed its people and it will be forced to sell down its surpluses into a global market already suffering from oversupply, potentially driving down prices further.
The situation has exposed China's inefficient and expensive government subsidy program aimed at keeping farmers' incomes up. The government is struggling with how to protect its rural residents while cutting production of these perishable commodities to save money and keep surpluses down.

The only real hope for U.S. farmers was exports, so this is bad news, too.
Posted by A Farmer at 10:26 PM 0 comments

Email ThisBlogThis!Share to TwitterShare to FacebookShare to Pinterest
Labels: Ag economy, Fools and Their Money (Temporarily), News in the Midwest, Oops

Moving a Tree from Avery Lawrence on Vimeo.

Email ThisBlogThis!Share to TwitterShare to FacebookShare to Pinterest
Labels: Things I Don't Understand 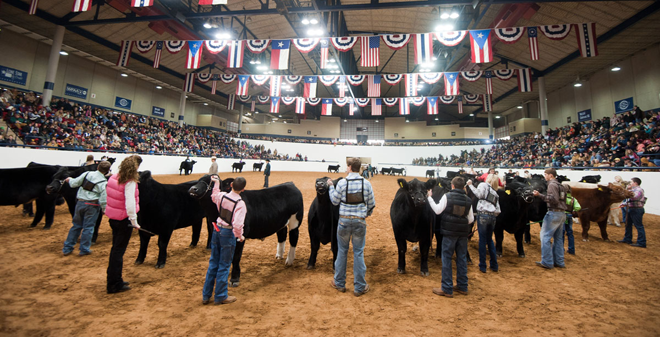 
Increasing sale prices are just one component of the escalating cost of showing pigs — premium feeds are also very expensive. But they’re not as costly as cattle, which is partly why interest has grown in hog competitions. The National Swine Federation recorded a 15 percent increase in the number of purebred registered hogs between 2009 and 2013, and youth membership tripled over the past 10 years, to 12,400 kids.
Vaughan declined to say how much she paid for their pigs. “We do the top line of everything,” she says. “You get out of it what you put into it.”
Success in the show ring, however, is a far from objective process — especially when the judges themselves are in the hog breeding business.
“There is a lot of politics to it,” Vaughan says. “There’s people we’ve never bought a pig from, and they’ll bring them right to the top, and kick ‘em in the guts. And they’re doing that to my little boy, that makes my mommy claws come out a little bit. I’ll never go to a sale of his, if that’s how you’re going to treat me. You should be saying, ‘I want you to have my pig.’” ‘
The Vaughans’ determination aside, competition in West Virginia is mild compared to the massive state fairs in Iowa and Indiana and Ohio.

I've never understood the economics of market show animals, or breeding stock for that matter.  At least with the breeding stock, you have a small chance of hitting the lottery with semen sales (yes, I did type that), but with the market animals, you are paying outrageous money for a steer or barrow (castrated male cattle and swine, for the city folks out there) that only has a future on somebody's dinner plate.  The market for that is pretty well set (at a loss), although state fair grand champions will bring in a windfall (a state champion steer bought a local guy a Corvette and an Ohio State education [well, at least the car was worth something]).  Anyway, parents, as they have been wont to do in kids' sports, have ruined another youth pastime by ratcheting up the competition until they drive the fun (and affordability) out of things.  What good is childhood if it is just the fucked up adult world for minors?  My parents did a lot of things right, but one of the things they did best was to keep the right perspective on youth sports and 4H.  At least for the sports, it helped that my sister and I were terrible athletes.  For the fair, it probably helped that we were cheap and lazy, and only interested in a county fair pass.
Posted by A Farmer at 10:54 PM 2 comments

A Hell of a Crop on the Monkey Dirt 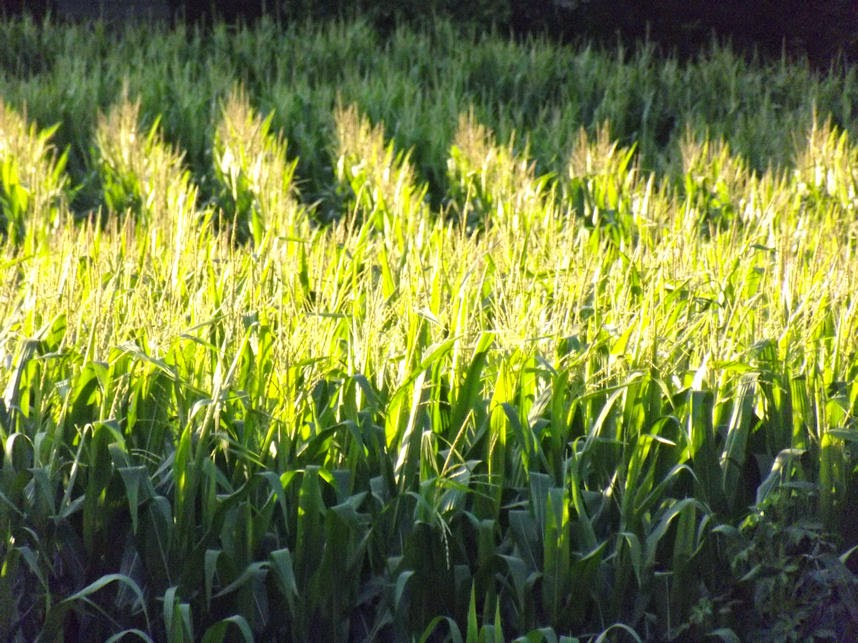 Corn in front of my house in July

Bloomberg looks at the anticipated massive harvest this fall:


Cory Ritter, who farms about 2,000 acres with his father near Blue Mound, Illinois, said they planted more corn this year and expects to harvest 250 bushels an acre, at least 15 percent more than he originally anticipated. Some fields may get as much as 280 bushels, with some plants sprouting second ears and kernels heavier and larger than last year, he said.
“My corn has not been under any weather stress for one day,” said Ritter, 33. “The seed popped out of the ground in four days and started growing right away. Cool temperatures helped during pollination, producing big ears, and rains have come at the perfect time all season. It’s my best crop ever.”

I'm pretty optimistic for our early-planted corn and most of our beans, and expect better than average crops overall, but 280 bushel corn?  Holy shit!
Posted by A Farmer at 10:38 PM 0 comments

Email ThisBlogThis!Share to TwitterShare to FacebookShare to Pinterest
Labels: Ag economy, News in the Midwest 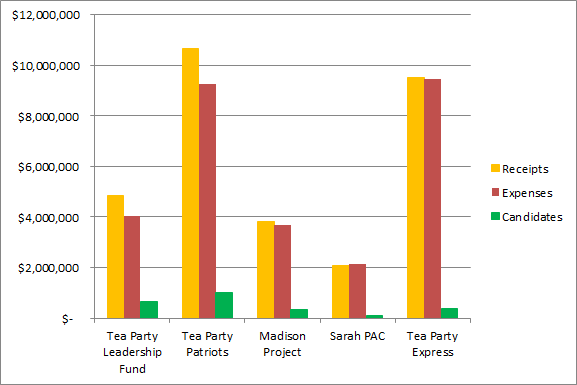 I guess there is a good living in separating bigots from their money.
Posted by A Farmer at 8:49 AM 0 comments

Email ThisBlogThis!Share to TwitterShare to FacebookShare to Pinterest
Labels: Crooks and Liars, Don't Drink the Tea, Fools and Their Money (Temporarily), Idiots, Jerks, The Republican Party and other Brainwashing Cults 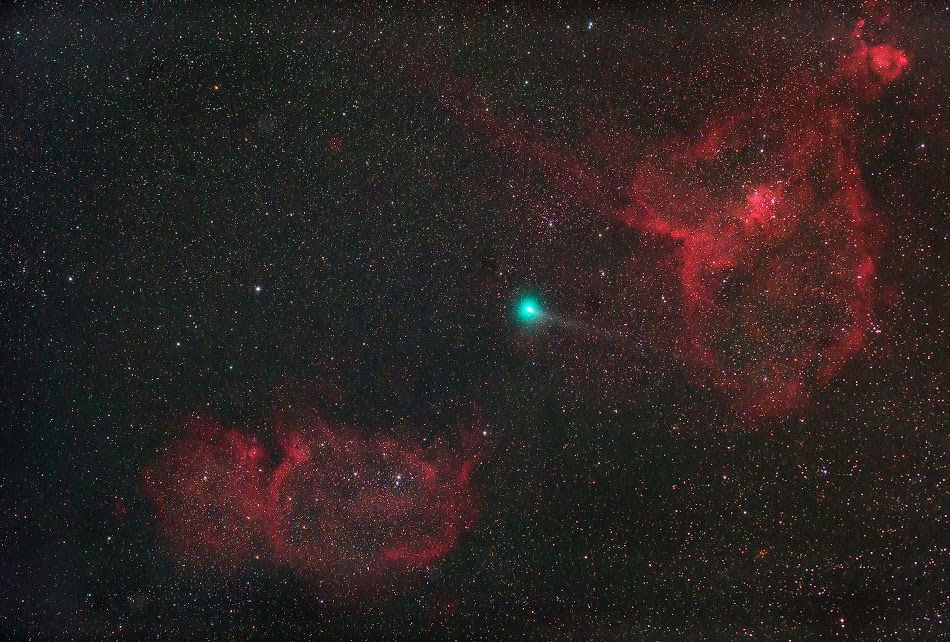 Comet Jacques, Heart and Soul
Image Credit & Copyright: Dominique Dierick
Explanation: On July 13th, a good place to watch Comet Jacques was from Venus. Then, the recently discovered visitor (C/2014 E2) to the inner solar system passed within about 14.5 million kilometers of our sister planet. But the outbound comet will pass only 84 million kilometers from our fair planet on August 28 and is already a fine target for telescopes and binoculars. Two days ago Jacques' greenish coma and straight and narrow ion tail were captured in this telescopic snapshot, a single 2 minute long exposure with a modified digital camera. The comet is flanked by IC 1805 and IC 1848, also known as Cassiopeia's Heart and Soul Nebulae. If you're stuck on planet Earth this weekend you can hunt for Comet Jacques in evening skies, or spot a Venus, Jupiter, crescent Moon triangle before the dawn.
Posted by A Farmer at 8:57 PM 0 comments