This contributor to oppressive heat is new to me: 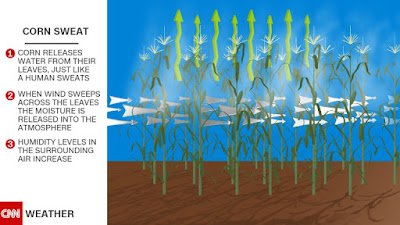 Unfortunately, that moisture is moisture that corn needs really badly right now.
Posted by A Farmer at 3:35 PM 0 comments

Email ThisBlogThis!Share to TwitterShare to FacebookShare to Pinterest
Labels: Ag news, Didn't Know That, Food for Thought, Mother Nature that Bitch, News in the Midwest


The temperature in Mitribah, Kuwait, surged Thursday to a blistering 129.2 degrees. And on Friday in Basra, Iraq, the mercury soared to 129.0 degrees. If confirmed, these incredible measurements would represent the two hottest temperatures ever recorded in the Eastern Hemisphere, according to Weather Underground meteorologist Jeff Masters and weather historian Christopher Burt, who broke the news.
It's also possible that Mitribah's 129.2-degree reading matches the hottest ever reliably measured anywhere in the world. Both Mitribah and Basra's readings are likely the highest ever recorded outside of Death Valley, Calif.
Death Valley currently holds the record for the world's hottest temperature of 134.1 degrees, set July 10, 1913. But Weather Underground's Burt does not believe it is a credible measurement....
If you discard the Death Valley record from 1913, the 129.2-degree reading from Mitribah Thursday would tie the world's highest known temperature, also observed in Death Valley on June 30, 2013, and in Tirat Tsvi, Israel, on June 22, 1942. But Masters says the Israeli measurement is controversial....
While the Middle East's highest temperatures have occurred in arid, land-locked locations, locations along the much more sultry Persian Gulf and Gulf of Oman have faced the most oppressive combination of heat and humidity. Air temperatures of about 100 degrees combined with astronomical humidity levels have pushed heat index values, which reflect how hot the air feels, literally off the charts.
In Fujairah, on the east coast of the United Arab Emirates, the dew point — a measure of humidity — reached 90 degrees  at 4 p.m. local time Thursday. The 90-degree dew point, combined with the air temperature of 97 degrees, computes to a heat index of over 140 degrees.

Why on earth would we spend trillions of dollars to fight over a region that is literally becoming uninhabitable?  Oh, that's right, so we can make sure the oil flows and makes it even more unlivable.  We are idiots and will be the cause of our own near-extinction.
Posted by A Farmer at 3:19 PM 0 comments

Donald Trump alone can make the nation safe?  How can anybody believe that crazy shit? But if they believe that, they will probably believe his interpretation of statistics, too.  I think Politifact will be busy for a while.
Posted by A Farmer at 5:34 AM 0 comments

The Mistake on the Lake

I really don't know what to make of the shitshow that has been the GOP convention so far.  I already couldn't actually watch the speeches, because I just don't recognize the country that Republicans describe.  Does this country face immense problems?  Certainly.  But how can Republicans act as if they are blameless in this?  When people talk about how the economy has sucked under Obama, I would like to explain that it was much worse under Bush.  When Republicans talk about Hillary being responsible for the deaths of 4 Americans in Benghazi, I'd like to remind them of the more than 4,000 American deaths in Iraq thanks to Bush.  When they talk about how Americans are under attack by terrorists because Obama is weak, I think of September 11.  When they talk about how Hillary should be in jail for her email fuckup (she should probably get a punishment like Petraeus), I wonder how that trial for torture would go for Bush and Cheney.  When they talk about how California is a failing state, I like to bring up Kansas.  But the circus in Cleveland really makes it appear that the Republican Party has finally jumped the shark (although it was Chachi who spoke at the convention, and not the Fonz).  It's been all about tax cuts, guns and the freedom to be an obnoxious asshole and bigot.  I did catch a little bit of Mike Pence's speech last night, and I was amazed when he said Trump had an utter lack of pretense.  Seriously?  I thought Trump was all pretense.  However, that Ted Cruz self-martyrdom (or Trump's Cruz heel turn) was the craziest mess I've ever seen at a convention.  Thank you, Republicans, for making me feel better about the crazy mess that is my life.  At least I'm not a Republican.
Posted by A Farmer at 8:42 PM 2 comments

Email ThisBlogThis!Share to TwitterShare to FacebookShare to Pinterest
Labels: Don't Drink the Tea, Idiots, Jerks, Strange But True, The Republican Party and other Brainwashing Cults, Things I Don't Understand, You Can't Make This Shit Up

How To Make A Tennis Ball

How to Make a Tennis Ball from Benedict Redgrove on Vimeo.

This is a very good piece at ProPublica about the Dayton region and the changing GOP.  Here is a sample:


For decades, Dayton had been an exemplar of American capitalism and ingenuity — back when America not only invented things but still made the things it invented, Dayton did a lot of both. In 1890, it generated more patents per capita than any other city — there were the Wright Brothers and their bicycle shop, of course, but also James Ritty, the saloonkeeper who invented the mechanical cash register to keep his employees from pilfering dough, and John Patterson, who transformed Ritty’s invention into the National Cash Register company, and Charles Kettering, the engineer who turned Ritty’s creation electric. The sound of Dayton in these years was, literally, ka-ching. The Third National Bank was finished with imported marble and mahogany woodwork; patrons did their business at bronze check desks. Local hotels included the Biltmore and the Algonquin — the aspirations were transparent, and not unjustified.
Kettering went on to found the auto parts giant Delco, where he developed the electrical starting motor and leaded gasoline, plus side ventures with DuPont and others to invent Freon and colored paint for cars. In the postwar years, Dayton had a higher concentration of auto workers than anywhere outside of Michigan. The city swelled with new arrivals in search of work — not just African-Americans on the Great Migration, but Scots-Irish up from Kentucky and Tennessee. By 1960, Dayton was still one of the 50 largest cities in the country — bigger than Charlotte, Tucson and Austin.
But as Whalen’s tenure carried into the 1970s, changes were underway. As elsewhere, the arrival of Southern blacks had been answered with white flight. In 1930, nearly three-quarters of Montgomery County’s population lived in Dayton, but half a century later, that share had plummeted to less than a third. They had moved to working-class inner suburbs like Miamisburg and Huber Heights, tight-knit communities with modest, well-kept frame houses and bungalows, and more upscale Oakwood or Beavercreek, which was just across the line into Greene County. The city that remained was the second-most racially segregated of Ohio’s eight largest. And the Appalachian migrants had added a more conservative element to the area’s political landscape.

It leans toward the rural versus urban dynamic, with the suburbs being the swing vote.  The prosperous suburbs with high percentages of college graduates tend to lean away from Trump, while the more working class suburbs are Trump country.  It is depressing to me how many people I know who support Trump, but I don't think there is much that's going to change that.  I suggest reading the whole piece,  it is very good.
Posted by A Farmer at 9:39 PM 0 comments