It's That Time Again

Time for Bob Wojnowski's Michigan-Ohio State column.  There are a couple of good OSU jokes in there.  Hopefully it is a good game, and hopefully, the team that doesn't go to the Big Ten championship game doesn't go to the college football playoff.
Posted by A Farmer at 9:13 AM 0 comments

Email ThisBlogThis!Share to TwitterShare to FacebookShare to Pinterest
Labels: 'Tis The Season, Football, News in the Midwest

When I heard about the bus crash in Chattanooga, my first thought was to wonder if school busing there had been privatized, like they have in several school districts in this area.  All I had heard about the accident had mainly been racist or borderline racist comments from neighbors about the bus driver and how it was rumored he had asked the kids if they were ready to die.  I finally did read a story, though, and lo and behold:


The Hamilton County Board of Education confirmed in a statement Wednesday that it had received complaints recently about Walker "and the way he operated his bus."
It said the complaints were forwarded to Durham School Services, the private company that is contracted to provide bus services for the school system, for whom Walker worked.
Hart, of the NTSB, said Durham was operating under a "conditional" federal safety rating, meaning some unspecified problems had been uncovered in the past, but that they had been resolved satisfactorily, in August 2015.
He said investigators were going back over Durham's oversight and crash history.

While politicians and citizens love to complain about overpaid government workers and their lavish benefit packages, it should be patently obvious that the only way privatization can allow the private company to make a profit and save the government entity money is by paying the employees as little as possible.  This leads to high turnover, lack of commitment by employees, high error rates and other problems, many of which are seen in other low wage areas of employment.  Privatization also creates another layer of interference between the public and the oversight of the operating company and troublesome employees.  As the article says, the Board of Education forwarded the complaints to the private company, but mentions nothing about any actions taken by the company.

President-elect Trump announced his choice for Secretary of Education, and she is Betsy DeVos:


DeVos has been a vocal supporter of school choice, which is something Trump backed on the campaign trail. DeVos, who heads up the pro-charter and pro-school-voucher nonprofit American Federation for Children, has said parents should have the ability to choose the best schools for their children, whether they are traditional public schools, charters, or private schools. Trump has proposed creating a $20 billion federal voucher program for families to use to send their kids to the school of their choice.....According to Chalkbeat, DeVos’s family poured $1.45 million into an effort to prevent Michigan from adding oversight for charter schools. That effort ultimately failed. DeVos and her husband have been supporters of charter schools for decades and longtime opponents of regulation. And according to Chalkbeat, around 80 percent of the state’s charter schools are run by private companies. The lack of oversight has prompted concern from the Obama administration that some bad charters were being allowed to operate without improving or being forced to close.... DeVos, 58, is married to Dick DeVos, who ran unsuccessfully as a Republican for the governorship in Michigan. He is the former president of Amway, which his father co-founded, and of the Orlando Magic NBA team. Her brother, Erik Prince, founded Blackwater, the controversial security firm.

I expect Trump and Republicans will rush to privatize as many government services as they can.  This will be bad for the general public, but good for wealthy investors, who will be allowed to loot the treasury and provide poor services for traditionally public-run operations, such as schools, prisons and infrastructure.  Trump has already made private investment the keystone of his much-anticipated infrastructure plan.  They may even expand into new areas, such as regulatory oversight and law enforcement.  Notice that DeVos's brother founded Blackwater, the malignant contractor providing mercenary services to the federal government in Iraq. As the need for reform of police services becomes more acute, expect some to push for privatization.

When turning over public money to private companies to provide public services, the services become profit centers, quality and oversight go down, and good jobs disappear as the positions are turned into unattractive, low-wage jobs.  Back in my day, bus drivers worked seemingly forever, with very little turnover.  These jobs were often filled by farmers and the wives of farmers, who got much-needed steady income and health insurance for part-time jobs.  Unfortunately, as health insurance costs have skyrocketed (not just because of Obamacare, you right-wing jackasses out there) and resistance to taxes has increased, such jobs have started to be privatized.  With privatization, employees no longer stick around for years, and never get to know the families they are serving.  The supposed savings from privatization never really materialize.  However, workers have crappier jobs for crappier pay, wealthy investors get even more wealthy.  We need to push back against privatization and the crapification of employment and government services at this time when more and more pressure will be coming to contract the services out.
Posted by A Farmer at 6:36 AM 2 comments 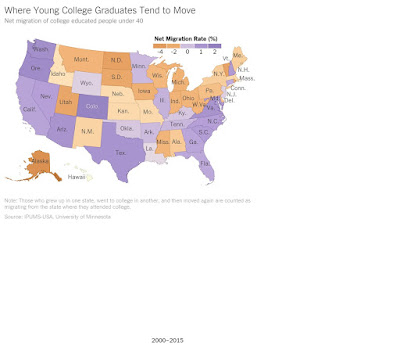 Actually, this would be even more interesting if broken down to the county level like those Red vs. Blue maps we see every election.  I would bet a large number of the red counties in Texas on those maps would be red here, too.  And New York state would also be interesting.  Honestly, population density explains hell of a lot, politically, and I would guess is also self-reinforcing in this map.
Posted by A Farmer at 10:02 PM 0 comments

Email ThisBlogThis!Share to TwitterShare to FacebookShare to Pinterest
Labels: Civil society, News in the Midwest, Strange But True

Headline of the Day

To be honest, when I first saw it, I thought it said "Giant Bag of Dicks." Yes, I am a terrible person.
Posted by A Farmer at 9:10 PM 0 comments

Email ThisBlogThis!Share to TwitterShare to FacebookShare to Pinterest
Labels: Strange But True, You Can't Make This Shit Up

VOYAGEURS 8K from More Than Just Parks on Vimeo.