The World Is Not Coming To An End

And violence against police isn't getting worse because Obama is President: 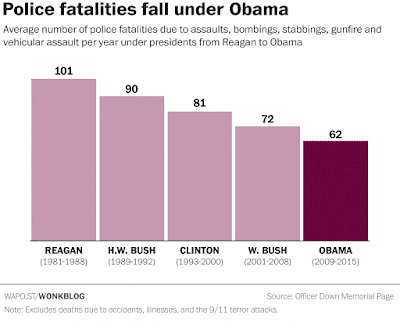 It's worth pointing out that in 2016, year-to-date officer fatalities via shooting only are up 44 percent over last year, according to the numbers compiled by the National Law Enforcement Officer's Memorial Fund. But that's partially an illustration of how sensitive these numbers are to individual incidents: If you set the Dallas shootings aside, the year-over-year increase is only 17 percent. And as Eugene Volokh points out, the 2016 numbers are roughly on par with the numbers for the past 10 years.

These figures in the chart above include all incidents in which a suspect intended to kill a police officer — shootings, stabbings, assaults, bombings and vehicular assaults. They exclude such things as accidental shootings, job-related illnesses and traffic accidents. If you were to narrow it down to just shootings, the overall trend would be roughly the same: from 80 deaths annually under Reagan to 48 annually under Obama. Again, factoring in the 2016 shooting numbers, including Dallas, has a negligible effect on the average under Obama.
These falling fatality numbers aren't simply a function of better medical care for injured officers. Overall assaults on officers are down, too. In 1988, the last year of the Reagan administration, there were 15.9 assaults for every 100 sworn law enforcement officers according to the FBI. In 2000, at the end of the Clinton administration, there were 12.7 assaults for every 100 officers. By the end of the Bush administration that number fell further to 11.3. Under Obama in 2014, the most recent year for which the FBI has data, that number further fell to 9.0.

I read a comment on Facebook from a local person I've met before which stated that America's racial relations were improving before Obama was elected and he set about causing discord.  I wanted to just reply, "Bullshit," but thought better of it. The Blame Obama crowd seems to think that getting elected made Obama too uppity, and it is reflected in tense relations between black citizens and the police.  Never mind that these tensions have been in place for 50 years, and that it has only been the presence of cameras available to record police brutality that have brought these issues to the forefront.   I realize I won't be able to convince almost any white people that if they were treated like black people are by police every day, they'd take a swing at a cop within a week, but I believe that is true.

The frustrating thing for me is that the police videos last week were making some white people really consider what black people face every day.  I heard a few people I know to be typically critical of the generic black person in trouble with the law express shock at what they thought were unjust police actions.  But it only takes one instance of violence by a black person (albeit in this case, a particularly horrific one) to more or less wipe all that out.  Even generally peaceful protests anger the majority of white people I know.  It seems that white America can relate to the suffering of blacks as long as they suffer those injustices calmly and in silence.  I hope that America's streets become safer for all Americans, whether they are police or civilians, white or black, but the numbers indicate that in general, police are safer now than they have been at any time during my life.  And that is a good thing.
Posted by A Farmer at 10:08 PM 0 comments

For Place and For Animals

For Place and For Animals from The Perennial Plate on Vimeo. 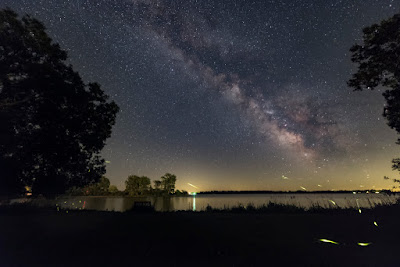 Firefly Trails and the Summer Milky Way
Image Credit & Copyright: Malcolm Park (North York Astronomical Association)
Explanation: A camera fixed low to a tripod on a northern summer's eve captured the series of images used in this serene, southern Ontario skyscape. The lakeside view frames our fair galaxy above calm water and the night's quintessential luminous apparitions. But the trails of light are neither satellite glint, nor meteor flash, nor auroral glow. In the wide-field composite constructed with four consecutive 15 second exposures, a pulsing firefly enters at the right, first wandering toward the camera, then left and back toward the lake, the central Milky Way rising in the background.
Posted by A Farmer at 8:29 PM 0 comments

Yes, I've been terribly neglectful of this site in the past few months.  My town job has been beating the tar out of me on a daily basis, and the farm work used up most of the rest of the spare time.  Plus, the news and politics have been bleak enough that I haven't really been up for commenting on it.

Now, though, with nothing to do but watch the rain dry up before it gets to us, and watch our corn crop burn up, I'll try to get back in the swing of things here.  Misery loves company. 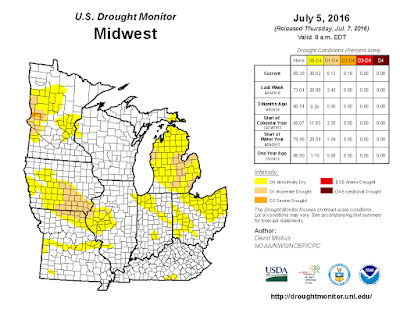