I survived the first of the three fish fries I work annually.  Since I doubt that anybody that reads this got to enjoy the deep-fried fish, fries, pickles, cheese, Oreos and cookie dough balls I prepared last night, I'll leave you with a few stories to read:

The Making of "Homer At The Bat,"The Episode That Conquered Prime Time 20 Years Ago Tonight - Deadspin

Myles Jones Is the Future of Lacrosse - VICE Sports

For Russian Farmers, Climate Change Is Nyet So Good - The Salt

When Beef Is Off Limits, Beaver And Muskrat Make It To Lenten Menu - The Salt.  Well, if you can't make it to one of our fish fries...

The Passion of the Bureaucrats - London Review of Books

U.S. Shale Drillers are Finally Buckling - Bloomberg and Built Up by Oil Boom, North Dakota Now Has an Emptier Feeling - New York Times.  The bust didn't happen the way I expected, but I'm not surprised it happened.

At Yosemite, a Waterfall Turns Into a Firefall - New York Times.  Gorgeous photos.

How the Panama Canal Got Its Groove Back - Priceonomics

The Economic Recovery's Geographic Disparities - The Atlantic.  Heavily agricultural areas were among the leaders.  Do not expect that to continue in the foreseeable future.

Bernie Sanders is the Worst Presidential Candidate in History, and You and All Your Friends are Idiots - Paste.  The results out of South Carolina may make this moot, but I loved this piece:


Literally none of his so-called “democratic socialist” programs have ever been successfully implemented in any government in world history, except for all the other major nations in the modern world, and also America during our most prosperous period.

Can a Christian Party Survive? - The American Conservative

A Taste of Vienna

A Taste of Vienna from FilmSpektakel on Vimeo.

From the Visual Capitalist, via Ritholtz: 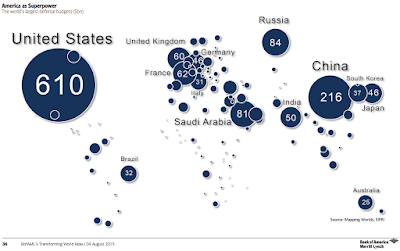 Do we get our money's worth?  Asked another way, what is our post-World War II winning percentage?  However, I'm not totally stupid.  I'm invested in most major defense contractor stocks.
Posted by A Farmer at 10:33 PM 0 comments

Email ThisBlogThis!Share to TwitterShare to FacebookShare to Pinterest
Labels: Civil society, Fools and Their Money (Temporarily), Government Bought And Sold, Things I Don't Understand, War Criminals and the Security State

They pulled off the biggest win in school history.  When I started listening to their games back in 1987 or so, I never would have guessed they would be the fifth-ranked team in the nation and would knock off the number one team.
Posted by A Farmer at 10:12 PM 0 comments 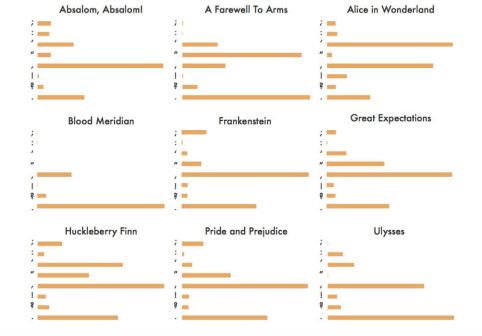 If you want to see somebody overuse punctuation, look at this guy [thumbs pointing at chest].
Posted by A Farmer at 10:36 PM 0 comments

Email ThisBlogThis!Share to TwitterShare to FacebookShare to Pinterest
Labels: Books and such, Civil society, Do as I say not as I do, Things I Don't Understand, Useless Information

George Washington was in need of income after he left the Presidency, and he tried to find it making whiskey:

Washington had a new plantation manager, James Anderson, who was from Scotland and had been trained as a distiller. Anderson cast an appraising eye on Mount Vernon’s fields of rye and proposed that they go into the whiskey business. Washington wrote Anderson that distilled spirits were “a business I am entirely unacquainted with,” but he allowed him to purchase a still and to convert part of a cooper’s shop at Mount Vernon. He wrote a nephew, “Rye chiefly, and Indian Corn in a certain proportion, compose the materials from which the Whiskey is made.”
It was not exactly in keeping with Washington’s public image to enter the whiskey trade. One scholar, Dennis Pogue, notes that in 1755, Washington failed to win election to Virginia’s House of Burgesses after refusing to match his opponent in passing out whiskey, rum punch and beer. (The next time, Washington gave out alcohol and won.) He had been disgusted when his troops were “incessantly drunk, and unfit for service,” and he had offenders punished. (In 1840, one Baltimore society that tried to help people who drank too much honored his demands for moderation by naming itself the Washingtonians.) As president, he sent 13,000 militiamen to put down the Whiskey Rebellion by distillers in western Pennsylvania, who had risen up against the federal whiskey tax (designed by the secretary of the Treasury, Alexander Hamilton) and threatened those who enforced it.
But Washington was not averse to alcohol. He is said to have liked sweet wines, rum punch and whiskey. During the Revolution, he declared that “the benefits arising from moderate use of strong Liquor have been experienced in all Armies.” In 1782, American soldiers were given daily rations of four ounces of whiskey, which was supplanting rum as the nation’s most popular liquor because it didn’t require molasses from the British West Indies.
And although he was happy to gain the additional income if the venture worked out, Washington, who had always taken great pains to make sure he was presented to the public as a leader worth emulating, may have feared having it widely known that he had become a whiskey baron. Feeling (or feigning) mixed emotions, the general was soon writing to a friend that Anderson had “run me into a very considerable expence (contrary I may say to my intention, or wishes)” to build a large new distillery, which was completed by the spring of 1798, and is considered, at a minimum, to be one of America’s largest of the time.
As it turned out, Washington’s whiskey business was a smashing success — he and Anderson couldn’t produce the spirit fast enough. In October 1799, he wrote another nephew, “Two hundred gallons of Whiskey will be ready this day for your call, and the sooner it is taken the better, as the demand for this article (in these parts) is brisk.” According to Mount Vernon scholars, that year he produced nearly 11,000 gallons, which achieved a profit of about $7,500 (about $142,000 today).
The venture did not instantly provide Washington with much ready capital — many of the transactions were not cash on the barrelhead but by barter or credit. But he was on the way to building what might have become a great American business when, that December, he died at the age of 67.

One thing you can say about early Americans-they could really drink a lot of whiskey.  Happy birthday, Mr. Washington.
Posted by A Farmer at 8:45 PM 0 comments

Email ThisBlogThis!Share to TwitterShare to FacebookShare to Pinterest
Labels: Ag economy, Beer and other gifts from God, US history 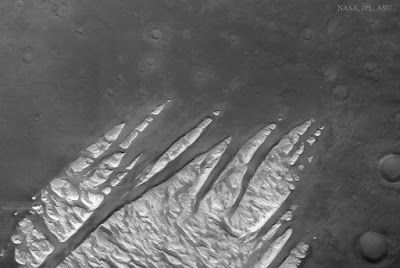 White Rock Fingers on Mars
Image Credit: THEMIS, Mars Odyssey Team, ASU, JPL, NASA
Explanation: What caused this unusual light rock formation on Mars? Intrigued by the possibility that they could be salt deposits left over as an ancient lakebed dried-up, detailed studies of these fingers now indicate a more mundane possibility: volcanic ash. Studying the exact color of the formation indicated the possible volcanic origin. The light material appears to have eroded away from surrounding area, indicating a very low-density substance. The stark contrast between the rocks and the surrounding sand is compounded by the unusual darkness of the sand. The featured picture was taken with the Thermal Emission Imaging System on the Mars Odyssey, the longest serving spacecraft currently orbiting Mars. The image spans about 10 kilometers inside a larger crater.
Posted by A Farmer at 7:49 PM 0 comments

Beautiful weather to start the weekend, and here are some good stories to make it better:

The Sweetest Stroke of All - Wall Street Journal

The Man in the White Hat - Texas Monthly.  On the guy who found Antonin Scalia dead. Also, Sometimes, Scalia Surprised the Living Sh*t Out of Me - Charles Pierce

Financial turmoil half a world away is melting Minnesota's iron country - Washington Post.  Expect similar stories on midwestern agriculture in the next couple of years.

Who Invented Stealth? Court Revives 1996 Suit Against Pentagon - Bloomberg.  If my grandfather were alive, he could probably shed light on this case.

A Country Breaking Down - NY Review of Books and The Long and Crumbling Road - The New Republic.  Due to sprawl, we probably have too much infrastructure to maintain, and we keep building more.  We have infrastructure requiring urban density trying to serve less dense suburbs and rural towns, and urban infrastructure rotting away in depopulated areas.

At least 14 Supreme Court justices have been confirmed during election years - Vox.  Science, economics, history.  Why would you expect Republicans to deal in a fact-based way on this?

How a Basket on Wheels Revolutionized Grocery Shopping  - Priceonomics 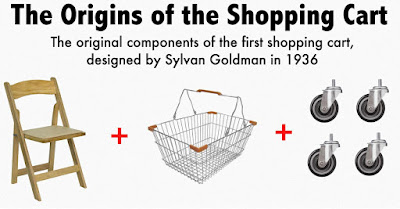