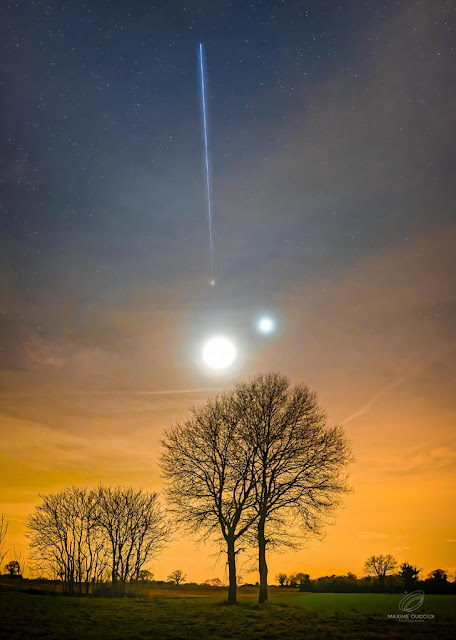 Conjunction of Four
Image Credit & Copyright: Maxime Oudoux
Explanation: On January 31, a waxing crescent Moon, brilliant Venus, and fainter Mars gathered in the fading twilight, hanging above the western horizon just after sunset on planet Earth. In this combined evening skyscape, the lovely celestial triangle is seen through clouds and haze. Still glinting in sunlight, from low Earth orbit the International Space Station briefly joined the trio that evening in skies near Le Lude, France. The photographer's line-of-sight to the space station was remarkably close to Mars as the initial exposure began. As a result, the station's bright streak seems to leap from the Red Planet, moving toward darker skies at the top of the frame.
Posted by A Farmer at 11:57 PM 0 comments

The LA Times fills you in: When you bite into a Thin Mint, you probably aren't wondering where it comes from. (The Girl Scouts, of course.) But wait, there are two bakers. And they make two very different Thin Mints: One is crunchier, more minty. The other is richer with a smooth chocolate coating.
Where you buy determines which ones you get. Orange County gets the crunchier Thin Mints, while Los Angeles gets the smoother ones. Dallas gets Samoas, but Fort Worth gets Caramel deLites. Most of Florida eats Tagalongs, but Orlando gets Peanut Butter Patties.
The new S'mores cookies are also different between bakers. One's covered in chocolate; the other sandwiches fudge and frosting between two cookies.

I'm getting the Thin Mints with the smooth chocolate coating.
Posted by A Farmer at 11:36 PM 0 comments