Quebec - The Saudi Arabia of the Maple Syrup Market

I love that there is a maple syrup cartel.  Of course it is in Canada: 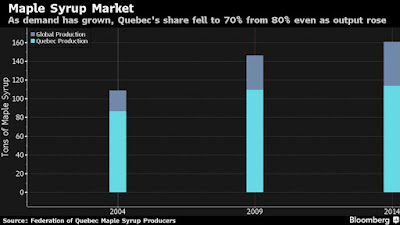 After eight years of tightly limiting output to keep prices high, the Federation of Quebec Maple Syrup Producers next year will boost its quota by 12 percent for 13,500 sap farmers who operate in the Canadian province. The goal is twofold: Reclaim the 10 percent of market share lost to the U.S. over the last decade, and quell a rebellion by producers increasingly turning to black market sales for growth.
Boosting the quota now is “almost perfect timing” as farmers are seeing record output, according to Alan Bryson, 41, who drains sap from 45,000 taps on trees in Notre-Dame-de-la-Merci, Quebec. The prospect of more sales “outweighs the frustration” felt by farmers in the past, he said....
The unanswered question is where all this additional product is going to go. Tappers this year will be paid C$2.88 ($2.20) a pound, based on a weighted average, federation data show. That’s up a penny from the previous two years...
U.S. production this year totaled 4.2 million gallons, a 23 percent boost from a year earlier, with Vermont accounting for 47 percent of the total, the U.S. Department of Agriculture said in June. The number of taps rose 5 percent this year, to 12.55 million, after increasing 45 percent from 2007 and 2015, according to the USDA.
That growth frustrated Quebec farmers, who have been urging an end to quotas. While the government-sanctioned cartel kept prices stable by limiting output and maintaining strategic stockpiles, tappers complained that the system imposed a “heavy, inflexible handicap to the province’s performance,” according to a 70-page report commissioned by Quebec Agriculture Minister Pierre Paradis, released earlier this year.
That frustration was leading some farmers to sell on the black market, and some said they felt harassed by the federation, according to the report.

Nothing like a cartel to cost itself market share.  Previous story on the Great Maple Syrup Heist here.
Posted by A Farmer at 11:29 PM 0 comments

Email ThisBlogThis!Share to TwitterShare to FacebookShare to Pinterest
Labels: Food for Thought, Other Parts of North America, Strange But True, You Can't Make This Shit Up

The Shining Star of Losers Everywhere

The Shining Star of Losers Everywhere from The All-Nighter Room on Vimeo.

Email ThisBlogThis!Share to TwitterShare to FacebookShare to Pinterest
Labels: Horse racing, Strange But True, You Can't Make This Shit Up

Final Touches Being Made on Iowa State Fair Butter Cow 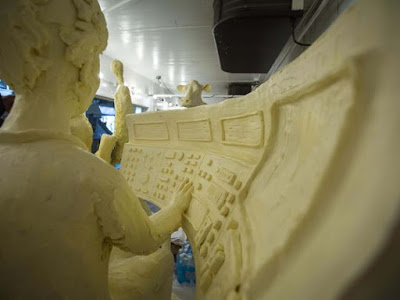 
T-minus six days until the gates swing open for the Iowa State Fair and Sarah Pratt puts some final touches on the face of the iconic butter cow, a tradition still going strong after 105 years. The hooves still need some detail work and she needs to finish the tail.
Five-gallon buckets of butter await in a cooler while giant blocks that just arrived need to be cut and kneaded to release water and make her medium more pliable.
But by the time Aug. 11 rolls around, Pratt will finalize her 11th version of Summer, the butter cow, as the official butter sculptor of the Iowa State Fair.
Pratt took over the sculpting duties in 2006 after 45-year veteran Norma “Duffy” Lyon retired. Pratt spent 15 years apprenticing under the first woman butter sculptor in the country, learning to use clay sculpting tools, even a dentist’s pick and mainly her own hands to take 1,000 pounds of butter and turn it into a cow...
Pratt, a former special education teacher, sketches out her sculptures in advance and welds together a metal and wire form on wood that gives her the basic structure of the piece. Already she completed a replica of the Starship Enterprise as well as Nyota Uhura and Spock, part of the butter cow companion exhibit. Capt. James T. Kirk’s metal frame already leans on his elbow in the commander’s seat and Dr. Leonard McCoy awaits his coating of butter.

I love me some butter sculptures and massive amounts of fried foods, with some creepy carnies thrown in for laughs.  Our county fair starts on Friday, and we've got the food and carnies, but lack the butter art.
Posted by A Farmer at 9:42 PM 0 comments

Email ThisBlogThis!Share to TwitterShare to FacebookShare to Pinterest
Labels: County Fairs, Food for Thought, News in the Midwest, You Can't Make This Shit Up

How To Overcome Procrastination

I didn't get a chance to watch this, but I will later, I swear.


How To Overcome Procrastination from Stuart Langfield on Vimeo.

Email ThisBlogThis!Share to TwitterShare to FacebookShare to Pinterest
Labels: Civil society, Do as I say not as I do


A Rocket Booster Falls Back to Earth
Video Credit & Copyright: Matthew Holt
Explanation: What's that crossing the sky? Although it looked a bit like a large meteor, it was actually the booster of a Chinese rocket returning to Earth after its launch two days earlier. On the night of July 27, the rocket component heated up and broke up into glowing pieces as it re-entered Earth's atmosphere. The path of the falling booster took it over several US states, moving west to east, from California to Utah. Space debris can usually be distinguished from meteors by its slow speed and expansive break up. The featured video was taken in front of the Provo City Library in Utah, which was coincidently occupied by over 100 people -- many with smartphones already out of their pockets playing Pokémon GO.
Posted by A Farmer at 9:40 PM 0 comments

Here are a few stories for your enjoyment:

Why Big Pharma Wants to Switch Billions of Farm Animals to Vaccines From Antibiotics- Bloomberg.  Ag has to change its antibiotic use.

Why Do Milk Prices Spike And Crash? Because It's Like Oil - The Salt

The Huelskamp Mistake - Wall Street Journal.  I disagree with the premise.  I think it is more that most voters hate other peoples' government programs, but really like their own.  Huelskamp was against the Farm Bill and the Export-Import Bank.  That doesn't sit well with farmers and the aircraft industry in Wichita. All the free market bullshit in this article is just that.

Meet the New Owner of the Playboy Mansion - New York Times.  I only highlighted this because these guys used to own PBR.

The Coolest Shipyard in America - Politico

How Did GOP Presidential Nominations Decline From a World War II General to a Narcissistic TV Celebrity?- Andrew Bacevich.  Bacevich is one of my favorite political commentators.

What do Donald Trump voters really crave? Respect - The Guardian

Ichiro Has 2,998 Hits - And A Few Even Left the Infield - Wall Street Journal.  I remember getting pissed at a bartender in Davenport, Iowa who was celebrating Mickey Mantle's quote about Pete Rose, "if I hit that many singles, I'd wear a dress." 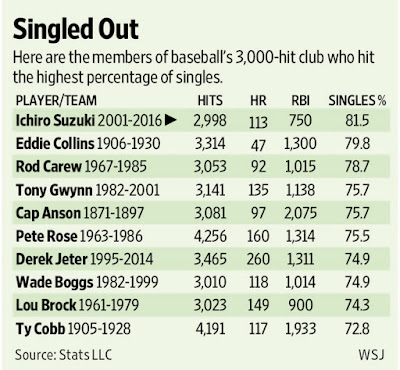