Well, I was a little lazy last weekend, and then I lost a number of the stories that I had tracked down and hadn't bothered typing in.  Here are a few which caught my eye, and I swear sometime I'll get off of my ass and post a few actually original posts (though not right now):

Can the Bison Still Come Back? - SB Nation

Rounding Up The Last Of A Deadly Cattle Virus - The Salt

US farmland prices stabilize - but 'further declines ahead' - Agrimoney.  I agree.

The Hunt for the Tinmouth Apple - Boston Magazine

Howard Buffett Is Getting His Hands Dirty - Bloomberg

How The Old Farmer's Almanac Previewed the Internet Age - The Atlantic

500 Years of Virgin Mary Sightings in One Map - National Geographic

How Apple is Giving Design a Bad Name - Fast Company.  I am not a member of the Apple cult.

The Discovery of Statistical Regression - Priceonomics.  Gauss sounds like something of a jerk.

It's Not Just the Drug War - Jacobin

What George H. W. Bush Got Wrong - The New Yorker 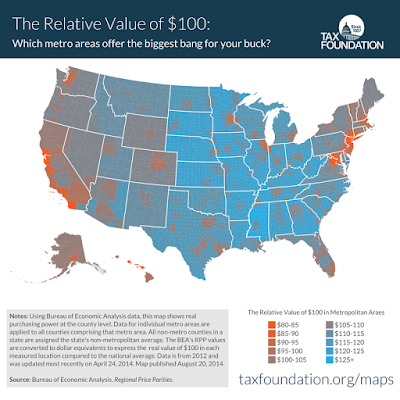 Email ThisBlogThis!Share to TwitterShare to FacebookShare to Pinterest
Labels: Books and such, Civil society, Engineering and Infrastructure, Food for Thought, Football, Gambling and other useful applications of math, News in the Midwest, the Church

Age of the Farmer

Age of the Farmer from Spencer MacDonald on Vimeo.

The Water Kings of California

Bloomberg has an interesting story on farmers in the Imperial Valley: 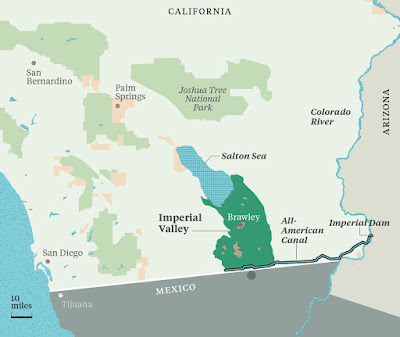 “You’ve been to the Grand Canyon, right?” Craig Elmore asks as he pulls his Chevrolet Tahoe to the edge of a field plowed into tidy, straight-as-an-arrow furrows, a section of the 6,000 acres that he farms—land his father and grandfather farmed before him. “Basically, right now, you’re driving over the Grand Canyon.”
Elmore speaks of the Imperial Valley with obvious pride, right down to the origins of the dirt, carried here over millions of years by the Colorado River as it carved the Grand Canyon ever deeper. These fields turn lush green every fall with the lettuce, broccoli, carrots, melons, and other fruits and vegetables that fill U.S. supermarkets all winter. It’s a scorching 109 degrees Fahrenheit (43 degrees Celsius) outside his air-conditioned SUV on this August day, but from November through March, temperatures moderate, and this small section of the Sonoran Desert in California’s southeast corner becomes a perfect spot to grow food.
Perfect, if you have water. And the farmers of the Imperial Valley have a wealth of water. A handful of landowners—about 500 farms in all—control the rights to 3.1 million acre-feet a year from the Colorado River. That’s equal to about a third of the water used by California’s cities, with 37 million people, where a four-year drought means neighbors report you if your lawn is green. Or, to measure another way, it’s half again as much water as Governor Jerry Brown aims to save under his April executive order, which set a February 2016 deadline for a 25 percent reduction in urban use. An acre-foot is about 326,000 gallons (1.2 million liters) and can supply the household needs of about 10 people for a year, though actual water use rates vary widely....

The most basic principle governing water use in the western U.S. is this: first in time, first in right. That’s why Imperial Valley farmers have so much water. They arrived early, building the first canal to withdraw Colorado River water and ship it to the valley in 1901. When John Elmore came to the valley more than a century ago, he worked for a time digging canals with something called a Fresno Scraper, an innovative tool for its era, with a blade something like that of a modern bulldozer but pulled by mules. In the 1930s, the federal government built the All-American Canal, which flows along the Mexican border from the Colorado River about 80 miles (130 kilometers) to the Imperial Valley. It’s the highest-capacity irrigation canal in the world (and still full).
Elsewhere in California, many conflicting water rights have never been adjudicated, but the Imperial Valley’s allotment has been defined and affirmed in court.


Another Imperial Valley farmer, Ronnie Leimgruber, whose grandfather immigrated here from Switzerland in 1918, is skeptical that anyone else deserves his water. “Do we really need 127 golf courses in Palm Springs for Obama and the Hollywood elite?” He raises alfalfa, the most water-intensive crop that’s grown in California, but has taken steps to cut his irrigation use.

Yeah, because growing alfalfa in the desert and exporting it to Saudi Arabia makes a ton of sense.  But if you want a real summary of the problem facing farmers throughout California, it is this:


“Agriculture accounts for 2 percent of the state’s gross domestic product and 80 percent of the water consumed by humans,” says Stephen Levy, director of the Center for Continuing Study of the California Economy in Palo Alto. So there’s a tension between city dwellers and farmers, Levy says. “Who do you think’s going to win that fight?” His view is that urban areas should and will get the water they need if it’s being wasted on the farms—a stance many politicians and regulators echo.

It may take a while, but I'm pretty sure farmers are going to lose.
Posted by A Farmer at 9:11 PM 0 comments

The Road Through Nowhere?

The Dayton Daily News takes a look at a plan to build a bypass around Cincinnati to avoid spending nearly $3 billion on the Brent Spence Bridge: 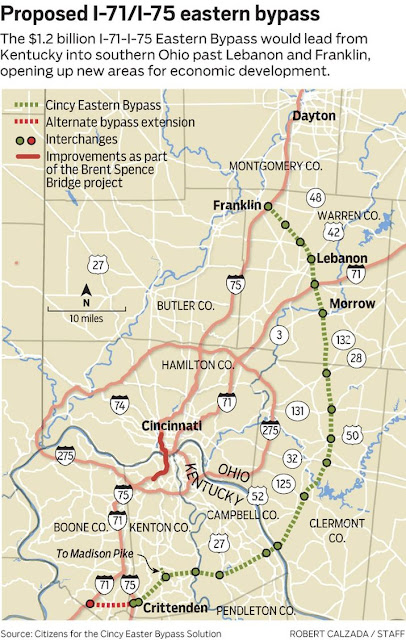 Debate over the merits of a proposed bypass road that would travel more than 60 miles from interstates 75 and 71 in northern Kentucky to Franklin in northern Warren County has divided leaders on both sides of the Ohio River.
Supporters say the Eastern Bypass is a more affordable alternative to the plan to improve the Brent Spence Bridge over the river, as well as add another lane along eight miles of interstate in the two states. They add it would also open up areas from northern Kentucky and southern Ohio for economic development.
Opponents say the bypass would cost several times as much and take much longer than supporters project. They also warn it won’t fix the gridlock across the bridge between downtown Cincinnati and northern Kentucky.
The debate has been reignited following remarks in favor of the bypass from Kentucky governor-elect, Matt Bevin, leading up to the election....
The bridge project calls for construction of a new span next to the existing bridge, as well as the widening of eight miles of interstate leading from the bridge - five in Kentucky, three in Ohio....
The plan claims the bypass would cost $1.2 billion - about a third of the $3.6 billion projected cost of the bridge project.
On Monday, OKI CEO Mark Policinski said the Ohio Department of Transportation and its Kentucky counterpart had both rejected the bypass.
The state transportation officials have put the actual cost of the bypass at more than $5 billion. This would be almost twice OKI’s latest estimate of $2.6 billion for the bridge project, according to Policinski.
Costs aside, Policinski said the state agencies found the plan would divert only about 36,000 of more than 155,000 cars and trucks, and would take at least a decade.

Seriously, this is insane.  Building a 60 mile bypass through the middle of nowhere?  This almost certainly ridiculously underpriced plan goes completely around all the population centers in the region.  How would this improve the commute for all of the people trying to get from one part of I-75 to the other?  Besides that, the Brent Spence Bridge is still 50 years old and carrying 10 times its design load every day.  This crazy project isn't going to change that or replace the existing bridge.  So who would think this is a good idea?  Oh:


Henry Fischer, owner of northern Kentucky-based Fischer Homes, is credited with leading promotion of the bypass. It would lead between northern Kentucky, just south of the city of Walton, looping east around Cincinnati into Ohio and ending in the Franklin area.

I should've known.  Honestly, there is no world in which this is a good idea.  I thought a previous, much smaller bypass was a stupid suggestion.  This is so much more ignorant, I can't even begin to take it apart.  Click to the previous post, read that and multiply the arguments by 100.
Posted by A Farmer at 8:55 PM 0 comments

Email ThisBlogThis!Share to TwitterShare to FacebookShare to Pinterest
Labels: Bad Ideas, Engineering and Infrastructure, Fools and Their Money (Temporarily), Idiots, the crossroads of politics and stupidity, Things I Don't Understand 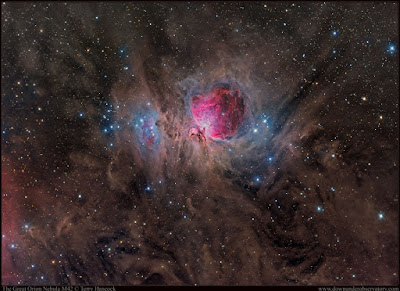 The Great Orion Nebula M42
Image Credit & Copyright: Terry Hancock (Down Under Observatory)
Explanation: The Great Nebula in Orion, also known as M42, is one of the most famous nebulas in the sky. The star forming region's glowing gas clouds and hot young stars are on the right in this sharp and colorful image that includes the bluish reflection nebulae NGC 1977 and friends on the left. Located at the edge of an otherwise invisible giant molecular cloud complex, these eye-catching nebulas represent only a small fraction of this galactic neighborhood's wealth of interstellar material. Within the well-studied stellar nursery, astronomers have also identified what appear to be numerous infant planetary systems. The gorgeous skyscape spans nearly two degrees or about 45 light-years at the Orion Nebula's estimated distance of 1,500 light-years.
Posted by A Farmer at 8:21 PM 0 comments