Email ThisBlogThis!Share to TwitterShare to FacebookShare to Pinterest
Labels: Basketball, Strange But True 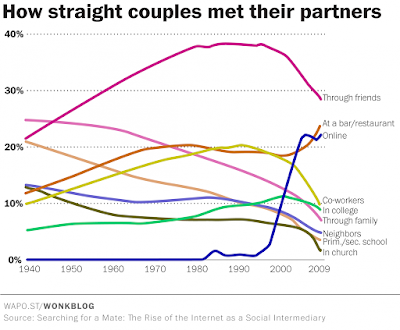 Email ThisBlogThis!Share to TwitterShare to FacebookShare to Pinterest
Labels: Civil society, Do as I say not as I do, Things I Don't Understand

Trump's Poorly Educated Voters May Be Key In Rust Belt 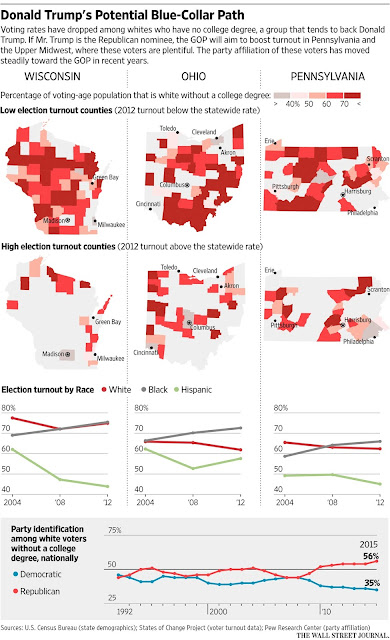 For now, Mr. Trump leads the GOP race in convention delegates and states won, largely built on a cadre of supporters—mostly white and without college degrees—who are angry about economic stagnation and are drawn to his aggressive immigration proposals, among other stances.
Some demographers and political analysts say Mr. Trump, if he wins the nomination, may boost voting rates among white, working-class residents in states where their turnout was low in 2008 and 2012. These include Pennsylvania and upper Midwest states such as Michigan, although a Wall Street Journal/NBC News/Marist poll released Sunday showed Mr. Trump trailing Democrat Hillary Clinton in that state by 17 percentage points in a potential general-election matchup. The upper Midwest is diversifying more slowly than the nation as a whole.
Some two million fewer whites voted in 2012 than in 2008, census data show. Turnout among white, non-Hispanic voters fell from 67% nationally in President George W. Bush’s 2004 re-election bid to 66% and 64% in the following two cycles...
States that saw a downturn in white voting rates in recent years included those in the Rust Belt where a majority of eligible voters are whites without a college degree, an analysis by Brookings Institution demographer William Frey found. These included Pennsylvania, Ohio, Wisconsin, Michigan and Minnesota. Analysts commonly use lack of a college degree to designate voters as working-class or blue-collar.
Some strategists say the falloff in white turnout rates reflects a relative lack of enthusiasm for recent GOP presidential nominees. A candidate such as Mr. Trump, they suggest, could boost turnout rates among working-class, white voters, who as a group have increasingly favored GOP candidates....
In 125 counties in Ohio, Pennsylvania and Wisconsin—more than half of all counties—the share of white residents without college degrees was higher than the state average, census data reviewed by the Journal show. In 94 of those counties, or 75%, voter turnout was below the state average—in some cases, far below.
In Lawrence County, Ohio, 53% of registered voters cast ballots in 2012, according to the secretary of state, well below the statewide average of 70.5%. In Fayette County, Pa., turnout was 53%, well below the statewide average of 67.6%. In both counties, nearly three-quarters of voting-age residents are whites without college degrees.
The numbers suggest that tens of thousands of nonvoting residents remain available to be moved to the polls—if a candidate is able to motivate them.

I would expect voters in Mercer, Auglaize and Shelby Counties, which are highlighted on the map as high turnout, low percentage of college degree counties, to probably support Cruz over Trump.  However, with Kasich in the mix, things will be interesting.
Posted by A Farmer at 8:01 PM 0 comments

Email ThisBlogThis!Share to TwitterShare to FacebookShare to Pinterest
Labels: News in the Midwest, Republicans Love Screwing Minorities, Rust Belt, The Republican Party and other Brainwashing Cults 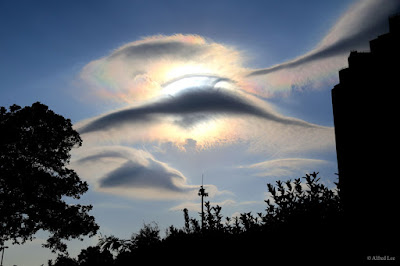 Unusual Clouds over Hong Kong
Image Credit & Copyright: Alfred Lee
Explanation: What's that in the sky? Earlier this month, in the sky high above Hong Kong, China, not just one unusual type of cloud appeared -- but two. In the foreground was a long lenticular cloud, a cloud that forms near mountains from uprising air and might appear to some as an alien spaceship. Higher in the sky, and further in the background, was a colorful iridescent cloud. Iridescent clouds are composed of water droplets of similar size that diffract different colors of sunlight by different amounts. Furthest in the background is the Sun, blocked from direct view by the opaque lenticular, but providing the light for the colors of the iridescent. Either type of cloud is unusual to see in Hong Kong, and unfortunately, after only a few minutes, both were gone.
Posted by A Farmer at 8:36 PM 0 comments

Email ThisBlogThis!Share to TwitterShare to FacebookShare to Pinterest
Labels: Crooks and Liars, Don't Drink the Tea, Jerks, The Republican Party and other Brainwashing Cults 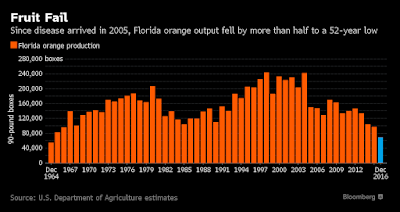 Mira’s nose is so sensitive that she can smell sick citrus trees, and U.S. orange growers are hoping her super sniffer will help combat one of the biggest threats ever to their crop.
The government has trained 10 dogs including Mira -- a 32-month-old German Shepherd-Belgian Malinois mix -- to identify a bacteria that has been killing citrus trees for a decade in Florida, the biggest domestic producer. Similar to canine teams that sniff out bombs, drugs and even bed bugs, this one is on the hunt for a disease known as citrus greening. There’s no cure, but growers hope the animals will give them more time to find one by slowing the contagion.
Florida’s orange harvest is forecast to reach a 52-year low this season, down 71 percent since 2004 as tiny bugs called Asian citrus psyllids spread the bacteria. It cost the citrus industry $7.8 billion and 7,500 jobs since 2006. Dogs, with 50 times more scent receptors in their noses than humans, sense chemicals that trees emit when infected. They’re accurate 99.7 percent of the time -- better than laboratory tests -- and identify diseased trees before symptoms appear....
Florida is expected to harvest 69 million boxes of oranges this season, or 56 percent of domestic production, and the state is the top grower of grapefruit, USDA data show. Each box weighs 90 pounds. California will supply 52.5 million boxes of oranges, and is the dominant supplier of tangerines and lemons. Texas ranks second in grapefruit.
Since 2005, when the disease was first found in the U.S. in Miami-Dade County, 15 states or territories have been placed under full or partial quarantine for the presence of the Asian citrus psyllid.
The bugs, which transmit the bacteria, reproduce rapidly and can fly a mile without pause, making them especially difficult to contain or kill. Researchers are still trying to understand how psyllid populations reduced by pesticides still manage to recover and spread the disease, said Robert Shatters, research molecular biologist for the USDA Horticultural Research Laboratory in Fort Pierce, Florida. While the disease exists in other countries like Brazil, the world’s biggest orange grower, the flat landscape and close proximity of farms in Florida make it particularly susceptible to contamination....
Already, about 75 percent of Florida’s groves are infected. The USDA is planning to dispatch most of the new canine unit to California, Arizona and Texas, where the disease is less widespread and early detection could be used more broadly, Dixon said.
“There is such a grave concern in areas where this disease does not exist that people want to know if it is there,” said Tim Gottwald, research leader and plant pathologist at the USDA.

I think we will see crippling diseases in other areas of industrial agriculture going forward.  Hopefully, I am wrong.
Posted by A Farmer at 7:47 PM 0 comments

Email ThisBlogThis!Share to TwitterShare to FacebookShare to Pinterest
Labels: Don't Drink the Tea, The Republican Party and other Brainwashing Cults

I fried up 110 pounds of fish this Friday.  The presidential race keeps getting weirder.  Here are some interesting stories for your enjoyment this weekend:

Welcome to the World Pond Hockey Championships, the tournament you aren’t supposed to win - VICE Sports

Noah Syndergaard and the Very Confident New York Mets - The New Yorker.  I'd prefer the Mets to the Cubs.

Xavier basketball is no longer an underdog - SB Nation.  While I love to see Xavier doing so well, losing the underdog status just changes things a little.

With Economy Stuck In The Mud, Farmers Sink Deeper Into Debt - The Salt

God, Wall Street And the New Push to Save U.S. Catholic Schools - Bloomberg.  Save or sell out?

What Will Become of Levittown, Pennsylvania? - CityLab

Inside 'the most toxic city in America' where the earth is poisoned by lead and zinc - Business Insider.  The region that gave us Mickey Mantle.

Dead End - Indianapolis Monthly.  I am a firm believer in science and math, but I must admit that several cancer cases amongst people you know make it very hard to believe that it is just a fluke.

The Bidding War - The New Yorker

Who is behind one of the biggest scams in history? - CNN Money.  Part 1 of 5. 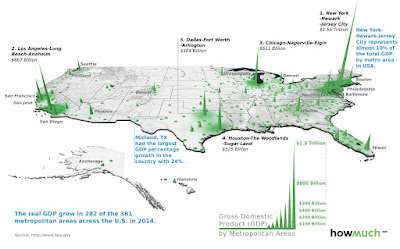