Harvests are under way of what are projected to be the largest corn and soybean crops in U.S. history, which soon will hit a global market already sitting on the largest-ever grain stockpiles.
Indeed, some farmers are hoping for a weather hiccup somewhere in the world to curb yields and breathe life into crop prices that recently hit multiyear lows.
They may be waiting a long time.
It is a dramatic turnaround from four years ago, when prices for many commodities were soaring to the highest levels U.S. producers had seen in their lives. Back then, extreme drought slashed production of major row crops, forcing ranchers to cull cattle herds as feed costs soared.But now farmers face a problem of the opposite sort. Prices for some crops are hovering near multiyear lows as storage facilities bulge with farm goods.
To make space for crops like corn after a massive wheat harvest last summer, Frank Riedl, general manager at Great Bend Co-op, a Kansas grain elevator and farm supplier, bought and leased extra land on which to build bunkers the size of football fields where he can heap millions of bushels of overflow grain.
“There’s an abundance of corn out here in the country and we don’t have the storage base for it,” he says. “Farmers are trying to find any place they can to dump their crops.”

Things are going to get ugly.  Farmers are still passably optimistic, but I think the next few years will probably beat that out of us.  Luckily for me, I've never been optimistic.
Posted by A Farmer at 9:39 PM 0 comments

Email ThisBlogThis!Share to TwitterShare to FacebookShare to Pinterest
Labels: Ag economy, Do as I say not as I do, Fools and Their Money (Temporarily), Happy Days Aren't Here Again, News in the Midwest

I Live In Yosemite

I Live In Yosemite from Megan Eleanor Clark on Vimeo.

Trump and the Rural-Urban Divide


Cracked has a good piece explaining some of what attracts rural voters to Trump:


These are people who come from a long line of folks who took pride in looking after themselves. Where I'm from, you weren't a real man unless you could repair a car, patch a roof, hunt your own meat, and defend your home from an intruder. It was a source of shame to be dependent on anyone -- especially the government. You mowed your own lawn and fixed your own pipes when they leaked, you hauled your own firewood in your own pickup truck. (Mine was a 1994 Ford Ranger! The current owner says it still runs!).....
The rural folk with the Trump signs in their yards say their way of life is dying, and you smirk and say what they really mean is that blacks and gays are finally getting equal rights and they hate it. But I'm telling you, they say their way of life is dying because their way of life is dying. It's not their imagination. No movie about the future portrays it as being full of traditional families, hunters, and coal mines. Well, except for Hunger Games, and that was depicted as an apocalypse.

I can appreciate the do-it-yourself mentality.  I was proud that I used an 8-pound maul to split all the firewood I used to heat my house for 15 years.  I can appreciate the feeling of emptiness one feels as he or she watches all the things one has held dear slowly die (for me, that includes American manufacturing, rural communities, the Catholic Church and the Republican Party).  I can appreciate the resentment toward "the big city."  I just dropped a large sum of money on a piece of land just so the neighboring town can't burn up more farm ground with big shit shacks for Citiots (yes, that is a combination of city and idiot).  However, I just can't understand how anyone can believe that Donald Trump is a trustworthy person, and not a flaming sack of shit.

As I listened to this story on NPR tonight, I was thinking that it would be better for struggling white folks to notice that their Hispanic neighbors shared many of the same beliefs in family, church and hard work, and that they would each be better off working together to address the inequality and lack of opportunity they each suffered under.  Meanwhile, they are splitting their vote between two ultra-rich asshole crooks who play them off against one another.  I don't know that this is a divide that can be surmounted, but if it is, I better invest my retirement funds in torches and pitchforks.
Posted by A Farmer at 12:29 AM 0 comments

I think this should have been a bigger story this weekend:

The three men from Liberal, Kansas, in the southwest part of the state, were targeting a nearby meatpacking town, planning to detonate bombs in an apartment complex where around 120 Somali immigrants reside.
According to the affidavit:

This is a militia group whose members support and espouse sovereign citizen, anti-government, anti-Muslim, and anti-immigrant extremist beliefs.

This comes after an eight-month investigation into the militia group called “The Crusaders.” The FBI even used an informant, who attended their meetings. Mother Jones adds:

Curtis Allen, Gavin Wright, and Patrick Stein allegedly contemplated murder, kidnapping, rape, and arson before settling on a different plan: They would obtain four vehicles, pack them with explosives, and set them off at the four corners of an apartment complex in Garden City, Kansas, that housed a mosque and 120 Somali refugees.

The attack was planned for the day after the election. It is notable that Garden City, Liberal and Dodge City are major packinghouse towns, and that all three are situated in counties that have populations in which non-Hispanic whites are the minority (the three green counties in SW Kansas): 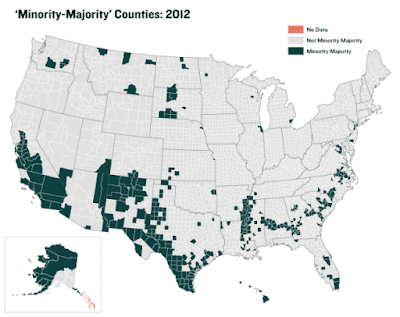 Hopefully, this plot is a one-of-a-kind incident, but based on the irresponsible rhetoric I hear coming out of this election campaign, I'm afraid that might not be the case in the near-term future.  I sure as hell hope we don't see more of this horrific stupidity.
Posted by A Farmer at 12:10 AM 0 comments

Email ThisBlogThis!Share to TwitterShare to FacebookShare to Pinterest
Labels: Civil society, Jerks, News in the Midwest, Things I Don't Understand 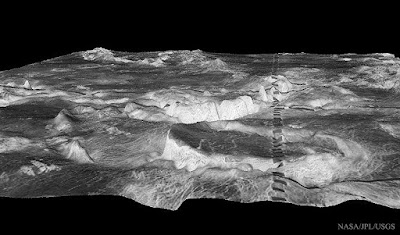 Cylindrical Mountains on Venus
Image Credit: Magellan Spacecraft Team, USGS, NASA
Explanation: What could cause a huge cylindrical mountain to rise from the surface of Venus? Such features that occur on Venus are known as coronas. Pictured here in the foreground is 500-kilometer wide Atete Corona found in a region of Venus known as the Galindo. The featured image was created by combining multiple radar maps of the region to form a computer-generated three-dimensional perspective. The series of dark rectangles that cross the image from top to bottom were created by the imaging procedure and are not real. The origin of massive coronas remains a topic of research although speculation holds they result from volcanism. Studying Venusian coronas help scientists better understand the inner structure of both Venus and Earth.
Posted by A Farmer at 11:38 PM 0 comments