Dawn of Fire from Tyler Hulett on Vimeo.

Here are some ag-related links that hit the news early in the Trump administration:

How Trump Would Rework NAFTA-and What Mexico, Canada Want in Return - Bloomberg 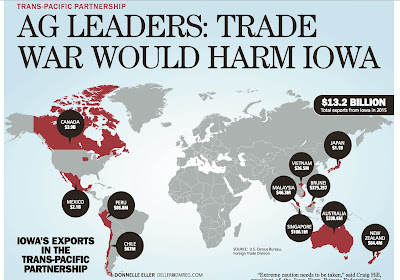 Email ThisBlogThis!Share to TwitterShare to FacebookShare to Pinterest
Labels: Ag economy, Food for Thought, News in the Midwest 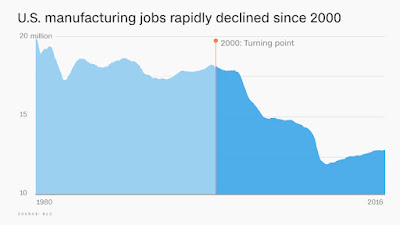 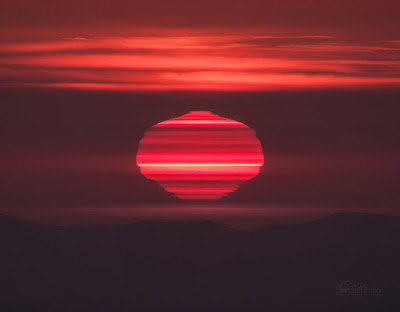 Layer Cake Sunset
Image Credit & Copyright: Yuri Beletsky (Carnegie Las Campanas Observatory, TWAN)
Explanation: On January 18 a tantalizing sunset was captured in this snapshot. Seemingly sliced into many horizontal layers the Sun shimmered moments before it touched the horizon, setting over the Pacific Ocean as seen from the mountaintop Las Campanas Observatory in Chile. Pink hues of filtered sunlight were created by the long sight-line through the hazy atmosphere. But the remarkable layers correspond to low atmospheric layers of sharply different temperature and density also along the line of sight. Over a long path through each layer the rays of sunlight are refracted strongly and create different images or mirages of sections of the setting Sun.

For some reason, this photo seems apt for Inauguration Day.  I think it may be how a stratified society sees different images or mirages of the new President.
Posted by A Farmer at 1:22 AM 0 comments

Wow.  What a start.  While I expected a train wreck, I didn't expect that the first meltdown would be an argument against all evidence that Trump's inauguration crowd was the largest ever.  It's going to be an unprecedented four years.  Anyway, here are some interesting stories:

Dallas Stars Troll Trump and His Lying Inauguration Attendance Numbers on Jumbotron - VICE Sports.  This photo is too awesome: 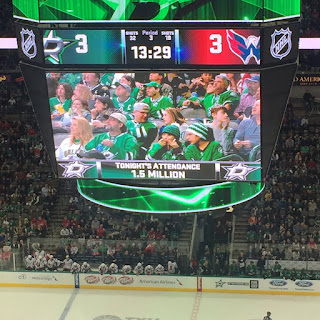 The President of Vice - The Onion.  The Onion reflects on eight years of Joe Biden making news.  And, finally, there is this.

Iceland knows how to stop teen substance abuse but the rest of the world isn't listening - Mosaic.  My former boss highlighted this story, and I think there are some important lessons here.  I tend to think that idle time, along with despair, are at the heart of the opioid problem we have right now.

Why Are There So Many People in Jail in Scranton, PA? - Vera

Congress moves to give away national lands, discounting billions in revenues and millions of jobs - Guardian.  No federal lands should be given away to the states.  Sold, as a last resort, but not given away under any circumstances.

Trump and the Revolt of the White Middle Class - Washington Monthly

Union City: a town waiting on Trump's promises and How does a manufacturing town remake itself for a new economy? - Marketplace.  All of the stories from Erie that Marketplace did last week were interesting, but I can't shake the feeling that a lot of people put way too much faith into the words of a conman.

Interactive Maps: Estimates of Enrollment in ACA Marketplaces and Medicaid Expansion - Kaiser Family Foundation.  If my math is correct, the average subsidy recipient is getting about $2400 a year toward health insurance.  It will be interesting to see if removing the supposedly unnecessary Obamacare requirements will drop the cost of health insurance for these folks enough to make up the loss of that subsidy, or if Republicans will keep that or an equivalent subsidy.  Everything I've seen appears that Republicans want to separate out the high cost patients and give tax credits or deductions to everybody, helping out those who don't need it, and helping less those who do.  Typically Republican.

A Tale of Two Economies - Bloomberg.  It would be interesting to know what percentage of jobs lost in this time frame in the more rural areas were related to decreased state and federal funding.  I would expect that Republican spending cuts (almost always linked to tax cuts that overwhelmingly benefited city and suburban residents), especially at the statewide level, inordinately impacted rural areas. 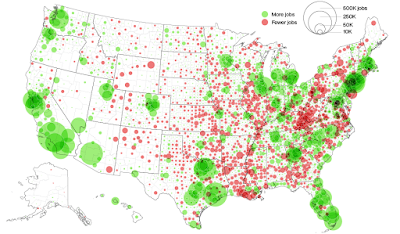