George's Boots from farmrun on Vimeo.

Happy Easter, good riddance, Lent.  Here are a few stories to check out between your holiday engagements:

A Body's Worth - SBNation

Betting the Farm - Bloomberg.  I believe we just went with ARC-County.  That seemed to be what most everybody did, and if it turns out to be wrong, Congress will probably bail us out.

CFTC Charges Kraft, Mondelez with Wheat Price Rigging - AgWeb.  I think this hits me much worse as a wheat farmer than it benefited me as a Kraft and Mondelez shareholder.  Way to go, corporate overlords.

Brutal U.S. Winter to Blame For Soaring Easter-Egg Prices - Bloomberg.  Seriously?  Sounds like bullshit to me.

Scotch on the Rocks While Bourbon Is Booming - Wall Street Journal

This Is How We Lose Them - Cincinnati Magazine

Why Do People Still Die of Rabies? - Priceonomics.  Because poor people in third-world countries die from it, so there isn't any money to be made.

Not his finest hour: the dark side of Winston Churchill - The Independent

Next, We Muslims Bring Sharia to Indiana - Daily Beast

Stuck in Seattle: The Aggravating Adventures of a Gigantic Tunnel Drill - Bloomberg.  The Travails of Bertha.

Email ThisBlogThis!Share to TwitterShare to FacebookShare to Pinterest
Labels: Ag news, Beer and other gifts from God, Civil society, Engineering and Infrastructure, Food for Thought, Strange But True, the Sweet Science 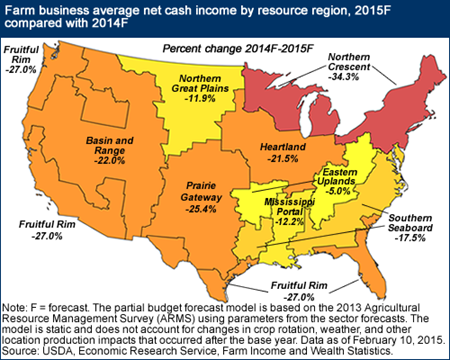 What's that story about the 7 good years?
Posted by A Farmer at 8:45 AM 1 comments

Email ThisBlogThis!Share to TwitterShare to FacebookShare to Pinterest
Labels: Ag economy, News in the Midwest, Oops 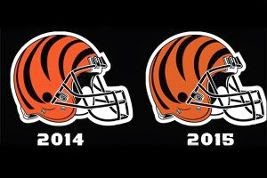 As part of a prank to commemorate the holiday and to troll their in-state rival, the Bengals tweeted they would have a "fresh new look for the 2015 season." The tweet contained a link that sent readers to their website. Once on the team site, readers were taken to a page that featured three pictures.
The first had two versions of the team's striped "B" logo side-by-side with the years 2014 and 2015 underneath them. The 2015 version of the "B" logo had an orange in it that was a slightly lighter shade of what existed in the 2014 logo. The second picture featured the same cosmetic tweak to the orange in the Bengals' striped helmet logo. The third picture also had a similar change in color between the words "Cincinnati Bengals 2014" and "April Fools 2015."
In a release that accompanied the pictures on the site, the Bengals said the 2015 changes were "extremely subtle, but the impact will be huge."

I didn't know Mike Brown had a sense of humor.
Posted by A Farmer at 8:31 AM 0 comments

Email ThisBlogThis!Share to TwitterShare to FacebookShare to Pinterest
Labels: 'Tis The Season, Football, Fun, News in the Midwest

From USDA via Big Picture Agriculture: 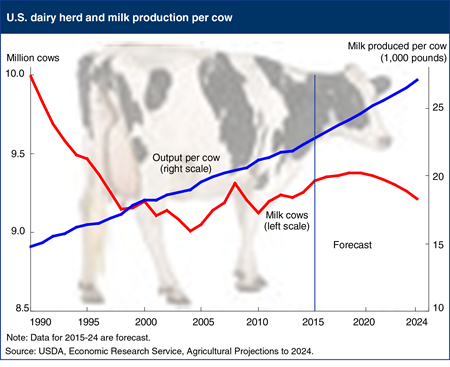 Email ThisBlogThis!Share to TwitterShare to FacebookShare to Pinterest
Labels: Ag economy, News in the Midwest

One of the greatest April Fools' pranks of all-time:
Posted by A Farmer at 4:03 PM 0 comments

Email ThisBlogThis!Share to TwitterShare to FacebookShare to Pinterest
Labels: 'Tis The Season, Fun, the National pastime

The Dominance of Welterweights


Today, the welterweight class is the division heaviest in talent. Besides Mayweather and Pacquiao, boxing elites Timothy Bradley, Amir Khan, Juan Manuel Marquez, Keith Thurman and Kell Brook, the International Boxing Federation champion, all claim a 147-pound address.
This concentration of fistic perfection is anything but an anomaly. Among boxing’s 17 weight divisions, the glamour of the 147-pound welterweight classification is rivaled only by the heavyweight division, which has generated far fewer stars in recent years despite covering a much wider group of weights. (Heavyweights are anyone over 200 pounds; welterweights span from 140 to 147.)
How did 147 become boxing’s magic number?
The origin of the 147-pound division, boxing experts say, goes back more than a century to England, where modern boxing was developed. “In the 19th century, champions would pretty much decide what their weight limit was going to be,” historian Robert Yalen said. “However, early in the 20th century, the National Sporting Club of England voted to standardize weight divisions. They used the English unit of the stone as a measure of weight. They came up with eight traditional weight classes and wanted something between the light and middleweight—something at 10.5 stone—which is 147 pounds.”
As for the name of the division, the term “welter” derives from horse racing, said historian Barry Hugman, where it referred to the amount of weight that a horse was to carry in a steeplechase or hurdle race.
Still, why such supremacy at this poundage?
The reason lies primarily in the unique mix of talents that the 147-pound boxer possesses. “Welterweight is the perfect middle ground where speed, power and boxing technique meet,” said Mauricio Sulaimán, president of the WBC, one of the four major bodies that sanction championship fights. “Go lower and you lose power; go higher into the middleweight division and you lose some of the speed.”
The constant depth of the 147-pound division also is owed to pure numbers. “Most men walk around at around 160,” said former welterweight champion Paulie Malignaggi. “If they were boxers, they would come down to 147 to fight.”

10.5 stones, of course.  Oddly enough, I think I fought every fight of my brief and inglorious career at 140 to 147.  Clearly, then, the weight class is also populated by a number of untalented boxers, too.
Posted by A Farmer at 5:56 AM 0 comments

Email ThisBlogThis!Share to TwitterShare to FacebookShare to Pinterest
Labels: Didn't Know That, Strange But True, the Sweet Science

Portrait of a Dogwalker

PORTRAIT OF A DOGWALKER from Fredrik Harper on Vimeo.

Email ThisBlogThis!Share to TwitterShare to FacebookShare to Pinterest
Labels: Fun, Strange But True

On Why The Death Penalty is Indefensible

Former Prosecutor Marty Stroud apologizes for sending an innocent man to death row:
In 1984, I was 33 years old. I was arrogant, judgmental, narcissistic and very full of myself. I was not as interested in justice as I was in winning. To borrow a phrase from Al Pacino in the movie "And Justice for All," "Winning became everything."


After the death verdict in the Ford trial, I went out with others and celebrated with a few rounds of drinks. That's sick. I had been entrusted with the duty to seek the death of a fellow human being, a very solemn task that certainly did not warrant any "celebration."
In my rebuttal argument during the penalty phase of the trial, I mocked Mr. Ford, stating that this man wanted to stay alive so he could be given the opportunity to prove his innocence. I continued by saying this should be an affront to each of you jurors, for he showed no remorse, only contempt for your verdict.
How totally wrong was I.
I speak only for me and no one else.
I apologize to Glenn Ford for all the misery I have caused him and his family.
I apologize to the family of Mr. Rozeman for giving them the false hope of some closure.
I apologize to the members of the jury for not having all of the story that should have been disclosed to them.
I apologize to the court in not having been more diligent in my duty to ensure that proper disclosures of any exculpatory evidence had been provided to the defense.
Glenn Ford deserves every penny owed to him under the compensation statute. This case is another example of the arbitrariness of the death penalty. I now realize, all too painfully, that as a young 33-year-old prosecutor, I was not capable of making a decision that could have led to the killing of another human being.
No one should be given the ability to impose a sentence of death in any criminal proceeding. We are simply incapable of devising a system that can fairly and impartially impose a sentence of death because we are all fallible human beings.
The clear reality is that the death penalty is an anathema to any society that purports to call itself civilized. It is an abomination that continues to scar the fibers of this society and it will continue to do so until this barbaric penalty is outlawed. Until then, we will live in a land that condones state assisted revenge and that is not justice in any form or fashion.

Amen.  I have to give Marty Stroud credit.  Unlike most prosecutors, he has admitted his error.  Others will argue that the convict is guilty even in light of exonerating DNA evidence.  And don't for a second think Glenn Ford is a very rare exception.  In spite of the obvious evidence that death penalty convictions are very frequently flawed, a large percentage of the country goes to extreme lengths to make sure they can keep killing people.  It makes me sick watching state after state pass laws to keep the supplier of their murder drugs secret so the companies won't face backlash from death penalty opponents.  Where is the transparency?  Where is the accountability when the state-sanctioned murder goes awry, like it did in Ohio and Oklahoma?   End the death penalty now.  Let the United States join the civilized nations of the world.
Posted by A Farmer at 9:25 PM 0 comments

Nebraska-Omaha, making its first ever appearance in the Frozen Four will meet Providence and Boston University will play North Dakota on April 9.
Posted by A Farmer at 5:58 AM 0 comments

Email ThisBlogThis!Share to TwitterShare to FacebookShare to Pinterest
Labels: Minor sports, News in the Midwest 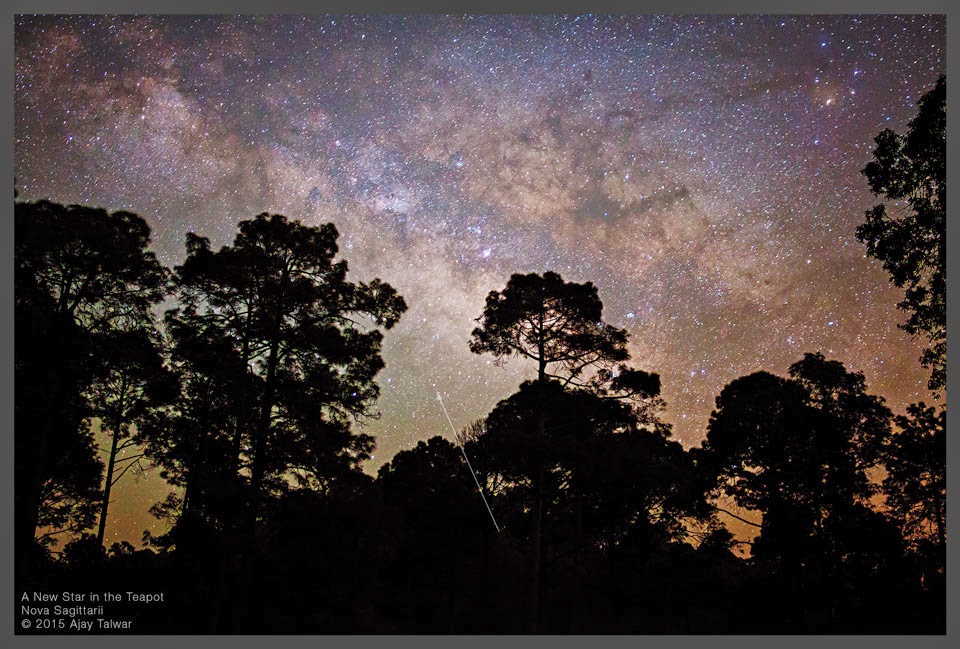 Naked Eye Nova Sagittarii 2015 No. 2
Image Credit & Copyright: Ajay Talwar (The World at Night)
Explanation: It quickly went from obscurity to one of the brighter stars in Sagittarius -- but it's fading. Named Nova Sagittarii 2015 No. 2, the stellar explosion is the brightest nova visible from Earth in over a year. The featured image was captured four days ago from Ranikhet in the Indian Himalayas. Several stars in western Sagittarius make an asterism known as the Teapot, and the nova, indicated by the arrow, now appears like a new emblem on the side of the pot. As of last night, Nova Sag has faded from brighter than visual magnitude 5 to the edge of unaided visibility. Even so, the nova should still be easily findable with binoculars in dark skies before sunrise over the next week.
Posted by A Farmer at 5:54 AM 0 comments


U.S. farmers increasingly are eschewing “King Corn” in favor of planting soybeans, a dramatic shift that is shaking up futures markets and rippling through the broader agricultural economy.
Analysts predict farmers will plant record soybean acreage this spring for a second consecutive year while cutting corn plantings for the third in a row. The move comes as growers grapple with a roughly 50% decline in the price of corn, the nation’s largest crop by volume, since 2012.
The U.S. Department of Agriculture on Tuesday will forecast corn and soybean plantings in a key report based on farmer surveys. Analysts on average expect soybean acreage to rise 3% from last year to 85.9 million acres, while corn will fall 2% to 88.7 million acres, according to a survey by The Wall Street Journal.
Indiana farmer Del Unger and his son intend to plant nearly twice as many soybean acres this spring as last year while trimming corn seeding on the 6,500 acres they farm.
“Economics rule,” the 53-year-old Mr. Unger said. “With beans, we’ll break even or make a small profit, whereas corn will likely give us some red ink.” Mr. Unger said most growers can easily switch between planting the two crops.

In other words, expect bean prices to sink, and corn prices to stabilize.  Here on our farm, we just stick to our rotation, unless weather prevents corn planting.  That keeps things simple.
Posted by A Farmer at 5:53 AM 0 comments