We're supposed to have highs in the mid-sixties and lows in the mid-fifties here two weeks before Christmas.  If you aren't wondering whether Old Man Winter kicked the bucket this fall, you might want to check out these stories:

One Last Smile With The Snake - SB Nation

My run-in with hate speech at a Minnesota Vikings game - Star-Tribune.

How the first turbaned NCAA basketball player responded to becoming a racist meme - Washington Post.  Not only are American racists generally stupid, they just can't figure out the difference between Sikhs and Muslims.

Antibiotic Use On Farms Is Up, Despite Promises To Kick The Drugs - The Salt.  I hate to tell you farmers, but this issue isn't going away.

This Scientist Uncovered Problems With Pesticides. Then the Government Started to Make His Life Miserable - Mother Jones.  The guy may have an agenda, or may be a kook, but I don't think that trying to silence him is the best way to disprove his claims. If he's wrong, trying to replicate his results ought to do the trick.

Everything You Know About Latkes is Wrong - The Atlantic

The Long Haul: One Year of Solitude on America's Highways - Esquire

The Scandalous Legacy of Isabella Stewart Gardner, Collector of Art and Men - Vice

These Canadians Own Your Town - Fortune

When Catholics Were America's Muslims - The Broken Elbow.  I always keep historical American anti-Catholicism in mind when listening to today's bigots, many Catholic.

A Missouri town demands substantive due process - Washington Post.  I would guess George Will's opposition has more nefarious roots, but I'll second his opinion about excessive fines in this community.

A House Divided - The New Yorker.  Good piece on the rise of the Jim Jordan-led "Freedom Caucus," and the inability of mildly sane Republicans to restrain them. 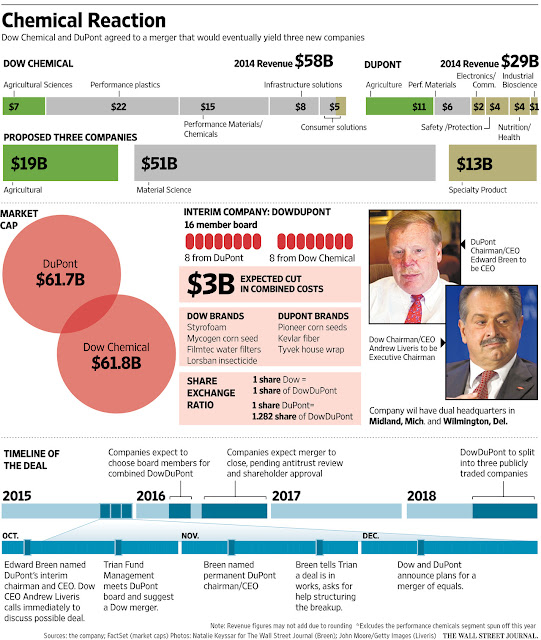 Interesting News on the Agribusiness Front


Dow Chemical Co. is in late-stage merger talks with DuPont Co., people with knowledge of the matter said.
A deal could be announced as soon as this week, said the people, who asked not to be identified because the information is private. After the merger, the company would break into two or three businesses because of regulatory and other issues, the people said. There is no guarantee a deal will get done and talks could still fall apart, the people said.
A combination would create the world’s second-biggest chemical company behind BASF SE and the world’s biggest seed and pesticide company, surpassing Monsanto Co.
Representatives of both companies declined to comment.

Whether this happens or not, there will be mergers in agribusiness.  The near-term future will not be kind to businesses in agriculture.
Posted by A Farmer at 9:28 PM 0 comments

Email ThisBlogThis!Share to TwitterShare to FacebookShare to Pinterest
Labels: Ag economy, News in the Midwest, The New Gilded Age, The rich get richer


Those most critically affected by the state's four-year drought are the Central Valley's farmers, whose livelihoods are threatened. Without rain to irrigate croplands, growers repeatedly turn to underground aquifers, but the overpumping has taken a toll, causing water tables to drop dramatically.
Fortunately, this winter's forecast in California calls for plenty of rain, most likely amplified by strong El Niño conditions. Storm drainage systems typically redirect most floodwater out to sea, but given the region's intense water deficit, hydrology scientists at the University of California, Davis, are experimenting with so-called groundwater banking, which involves sending storm water to flood fallow fields where it can percolate into the soil and replenish aquifers. Storm water absorbed in the winter can then serve as a reservoir of summer refreshment for growing crops, says U.C. Davis's Helen Dahlke.
For two months this winter Dahlke and her team will flood almond orchards in the Central Valley near Davis to a depth of two feet by redirecting rainfall through a network of ditches originally designed to divert floodwater away. To measure success, they will then monitor how much water filters into the water table over the course of two years. They will also test the quality of the infiltrated water and check trees for root rot, which could be detrimental to crop yield. If the method pans out, pear, plum and walnut tree orchards might also benefit from intentional flooding, according to a recent study led by Anthony O'Geen of the University of California's Division of Agriculture and Natural Resources.
Previous tests of the technique have proved successful. In 2011 Terranova Ranch manager Don Cameron diverted Kings River floodwater in Fresno County onto 240 acres of vineyards and other farmland, inundating them for five months. “They looked like rice fields, but the grapes did fine,” Cameron says. Seventy percent of the water percolated into the water table, where it was available for pumping back onto fields during the next growing cycle.
Questions remain about groundwater banking's effects on tree physiology and the extent to which salts and nitrates from fertilizers could migrate into drinking water.

Wow.  It is hard to imagine how that would be good for fruit or nut trees if the water was going to sit there for a very long time.
Posted by A Farmer at 9:20 PM 0 comments

Stormscapes 3 from Nicolaus Wegner on Vimeo.

Email ThisBlogThis!Share to TwitterShare to FacebookShare to Pinterest
Labels: cool stuff, Mother Nature that Bitch, News in the Midwest 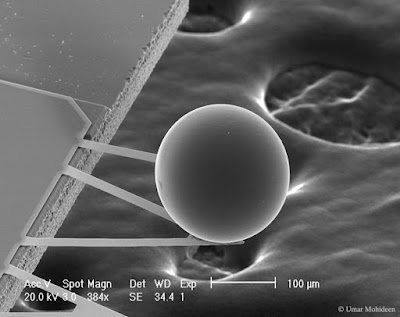 A Force from Empty Space: The Casimir Effect
Image Credit & Copyright: Umar Mohideen (U. California at Riverside)
Explanation: This tiny ball provides evidence that the universe will expand forever. Measuring slightly over one tenth of a millimeter, the ball moves toward a smooth plate in response to energy fluctuations in the vacuum of empty space. The attraction is known as the Casimir Effect, named for its discoverer, who, 55 years ago, was trying to understand why fluids like mayonnaise move so slowly. Today, evidence indicates that most of the energy density in the universe is in an unknown form dubbed dark energy. The form and genesis of dark energy is almost completely unknown, but postulated as related to vacuum fluctuations similar to the Casimir Effect but generated somehow by space itself. This vast and mysterious dark energy appears to gravitationally repel all matter and hence will likely cause the universe to expand forever. Understanding vacuum energy is on the forefront of research not only to better understand our universe but also for stopping micro-mechanical machine parts from sticking together.
Posted by A Farmer at 8:54 PM 0 comments