Boxing in prime time on network TV?  Count me in.  The fights include Cincinnati native Adrien Broner.  Nice.
Posted by A Farmer at 6:36 PM 0 comments

Email ThisBlogThis!Share to TwitterShare to FacebookShare to Pinterest
Labels: the Sweet Science

"The Guv'mint" is shorting you an hour this weekend, but if you get a little free time, here are some things to read:

The Man in the Van - ESPN

Long-term nitrogen fertilizer use disrupts plant-microbe mutualisms - Science Daily (via Big Picture Agriculture).  In other words, legumes done react as well with rhizobia when artificial N is added to the system.

Marine Le Pen lays out radical vision to govern France - Financial Times.  The article is interesting based on how Europe is changing, but I highlighted it because of how huge the bull is in the image of her and him on the video at the French agricultural show.  Holy shit.

From Our Prison To Your Dinner Table - Pacific Standard

The Gospel of Bockfest - Cincinnati Magazine.  I love me some bock beer.

El Nino Has Arrived, and It Could Produce the Warmest Year on Record - Slate.  Usually, that leads to a bumper crop in the Midwest, so crop prices have the potential to crater.

A Map of the First Proposed U.S. Highway System - io9

The Gangsters of Ferguson - Ta-Nehisi Coates and Ferguson's Conspiracy Against Black Citizens - Conor Friedersdorf.  Ferguson may be an extreme example, but it is far from the only place to abuse minorities like this.

Scott Walker loves Ronald Reagan more than seems humanly possible - Vox.  Not only is Scott Walker a jackass, but he's a weirdo, too.  "Happy anniversary, honey, have some jellybeans to celebrate Ronald Reagan's birthday." 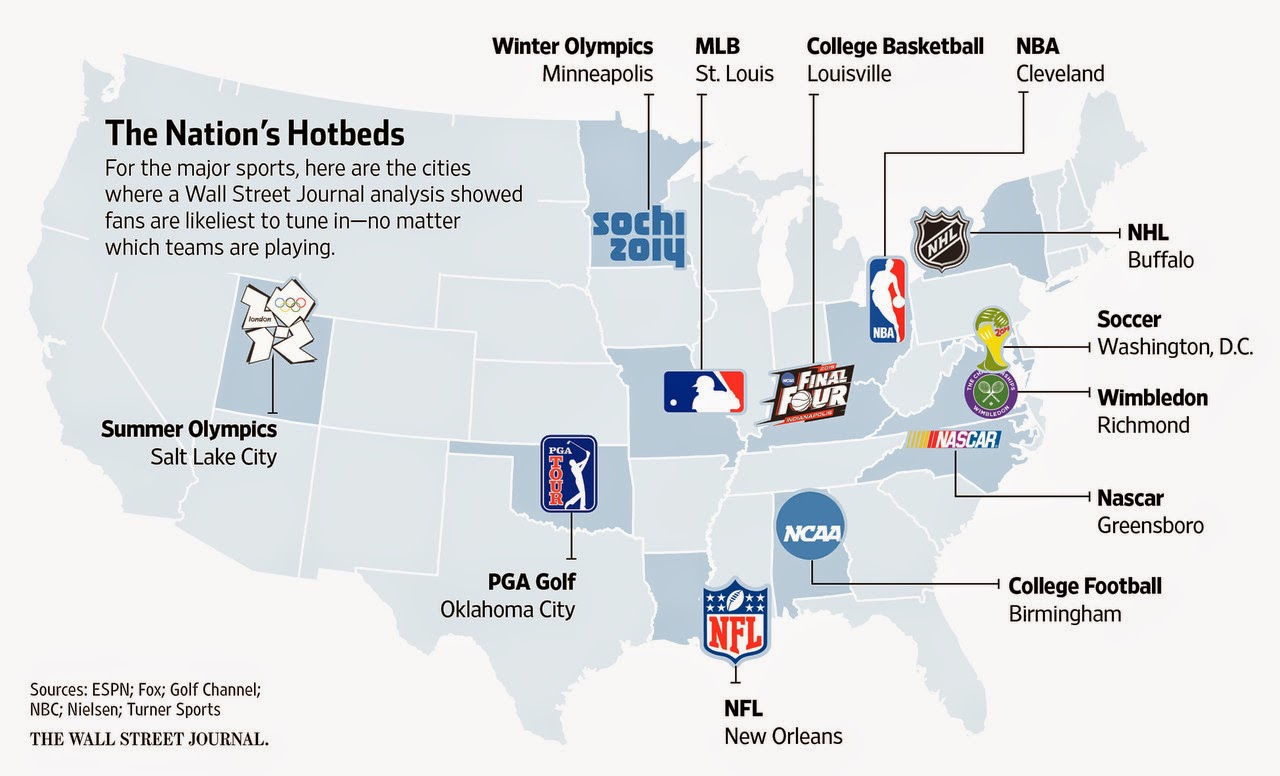 Email ThisBlogThis!Share to TwitterShare to FacebookShare to Pinterest
Labels: Ag economy, Basketball, Beer and other gifts from God, Civil society, Luck, Mother Nature that Bitch, News in the Midwest, The Republican Party and other Brainwashing Cults

Well, they aren't fish, but they are water animals, and Sprint:

Email ThisBlogThis!Share to TwitterShare to FacebookShare to Pinterest
Labels: 'Tis The Season, Fun, the Church

Milk and Blood from Markus Englmair on Vimeo. 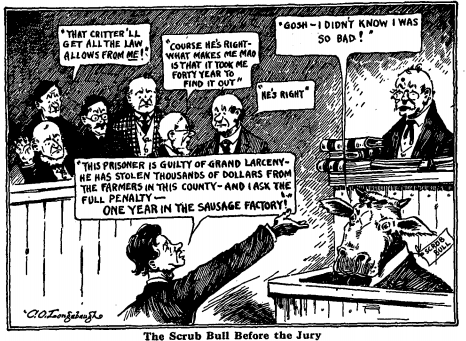 
Combine the growing population, the desire for cheap meat and milk, and the increasing popularity of eugenics, and the result, Rosenberg said, was the "Better Sires: Better Stock" program, launched by the USDA in 1919. In an accompanying essay, "Harnessing Heredity to Improve the Nation's Live Stock," the USDA's Bureau of Animal Industry proclaimed that, each year, "a round billion dollars is lost because heredity has been permitted to work with too little control." The implication: Humans needed to take control—and stop letting inferior or "scrub" bulls reproduce!
The "Better Sires: Better Stock" campaign included a variety of elements to encourage farmers to mate "purebred" rather than "scrub" or "degenerate" sires with their female animals. Anyone who pledged to only use purebred stock to expand their herd was awarded a handsome certificate. USDA field agents distributed pamphlets entitled "Runts—and the Remedy" and "From Scrubs to Quality Stock," packed with charts showing incremental increases of dollar value with each improved generation as well as testimonials from enrolled farmers.
By far the most peculiar aspect of the campaign, however, came in 1924, when the USDA published its "Outline for Conducting a Scrub-Sire Trial." This mimeographed pamphlet, which Rosenberg recently unearthed, contained detailed instructions on how to hold a legal trial of a non-purebred bull, in order to publicly condemn it as unfit to reproduce. The pamphlet calls for a cast of characters to include a judge, a jury, attorneys, and witnesses for the prosecution and the defense, as well as a sheriff, who should "wear a large metal star and carry a gun," and whose role, given the trial's foregone conclusion, was "to have charge of the slaughter of the condemned scrub sire and to superintend the barbecue."
In addition to an optional funeral oration for the scrub sire and detailed instructions regarding the barbecue or other refreshments ("bologna sandwiches, boiled wieners, or similar products related to bull meat" are recommended), the pamphlet also includes a script that begins with the immortal lines: "Hear ye! Hear ye! The honorable court of bovine justice of ___ County is now in session." The county's case against the scrub bull is laid out: that he is a thief for consuming "valuable provender" while providing no value in return, that he is an "unworthy father," and that his very existence is "detrimental to the progress and prosperity of the public at large." Several pages and roughly two hours later, the trial concludes with the following stage direction: "The bull is led away and a few moments later a shot is fired."

I don't think that process would go over that well these days, even though a bull has even less of a chance to survive today.
Posted by A Farmer at 9:34 PM 0 comments

Email ThisBlogThis!Share to TwitterShare to FacebookShare to Pinterest
Labels: Didn't Know That, News in the Midwest, Strange But True, US history

How Much Land Do You Need To Live Off Of?

Email ThisBlogThis!Share to TwitterShare to FacebookShare to Pinterest
Labels: Food for Thought 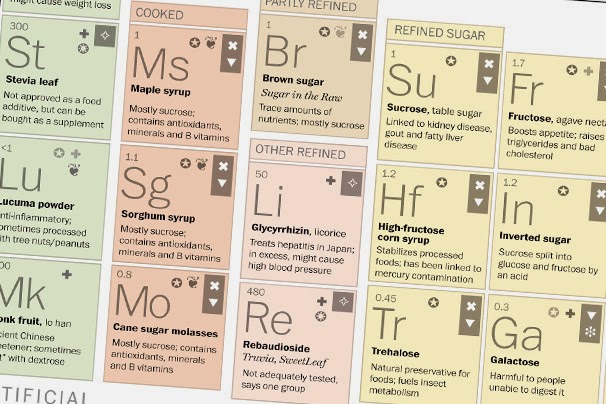 Most everything you wanted to know about sugar, brought to you by the Washington Post (and Big Sugar).
Posted by A Farmer at 8:30 PM 0 comments

Email ThisBlogThis!Share to TwitterShare to FacebookShare to Pinterest
Labels: Didn't Know That, Food for Thought, Science and stuff

They Really Are Slow Learners in The Deep South

As if they were out to prove Alabama didn't learn a damn thing from the Civil War or the battle for civil rights, Judge Roy Moore and crew decided to pretend they could overrule the federal courts.  Again.  What a fucking shithole.  They are really taking any flexibility the Supreme Court could have had out of their hands.  Looks like Alabama will have to be put in its place.  Again.  Exhibit A against states rights.  Again.
Posted by A Farmer at 8:01 PM 0 comments

Bloomberg looks at the pizza lobby:


For decades, pizza makers have relied on the food’s natural advantage: Everybody loves it. Some 41 million Americans — more than the population of California — eat a slice of pizza on any given day. If pizza were a country, its sales would put it in the top 100 of global gross domestic product. “Pizza is, without a doubt, the food of the gods,” says a 2014 video produced by the American Chemical Society that explains the chemistry behind pizza’s appeal. “All pizzas deliver divine, rich, cheesy, mouthwatering experiences that hustle your brain’s pleasure centers into overdrive.”
Until recently the U.S. government was inclined to agree. Pizza is such an efficient cheese-delivery vehicle that a farmer-funded promotional agency, authorized and overseen by the federal government, pushed fast-food chains to load up pizzas with more cheese. That effort led to Pizza Hut’s 2002 “Summer of Cheese” campaign and partially funded Domino’s 2009 introduction of its “American Legends” pizzas — pies topped with 40 percent more cheese. “These specialty pizzas are as American as apple pie,” Domino’s crowed, as part of its marketing campaign.
More recently, though, pizza has become a target, lumped into a nutritional axis of evil along with French fries and soda. New federal nutrition standards for school lunches, part of a 2010 law, squarely targeted pizza’s dominance in cafeterias. Menu-labeling rules, which take effect later this year, have seemed particularly onerous to pizzeria owners. And in the popular imagination, no less than First Lady Michelle Obama and Top Chef judge Tom Colicchio, though they claim to love the stuff, have emerged as enemies of pizza in their push for healthier school lunches. “I hear people say, ‘We would like to improve the school lunch program, but the kids, all they want to do is eat pizzas and burgers,’” Colicchio said in testimony to Congress in 2010. “We are adults here. It is up to us to do better.”
One by one, other purveyors of fast food have been convinced, nudged along by new laws or public shaming. McDonald’s, for example, voluntarily took soda out of Happy Meals and added calorie counts to its menus long before the government required it. Wendy’s also removed soda from its children’s menu, and Darden Restaurants reduced calories and sodium in kids’ meals at its restaurants, including Olive Garden and Red Lobster, and made vegetables and milk the default side options.
Pizza advocates have taken a different, more combative tack. They’ve separated themselves from other food groups in Washington to become their own lobbying force. They’re not throwing money around — pizza’s biggest spenders devoted less than $500,000 to lobbying last year and just $1.5 million in political contributions in the last two election cycles. But they have notched some successes, proving that under the right circumstances, firm resolve and a thin crust can still be persuasive in Congress.

Geez, Republicans sure are easily bought. But, considering today's guest at Congress, those Republicans sure do love them some pushy assholes especially if the target happens to be those uppity folks in the White House (emphasis for Republicans on White).
Posted by A Farmer at 7:46 PM 2 comments

Email ThisBlogThis!Share to TwitterShare to FacebookShare to Pinterest
Labels: Food for Thought, Government Bought And Sold, The Republican Party and other Brainwashing Cults

The Reds are on the radio!

Email ThisBlogThis!Share to TwitterShare to FacebookShare to Pinterest
Labels: 'Tis The Season, the National pastime 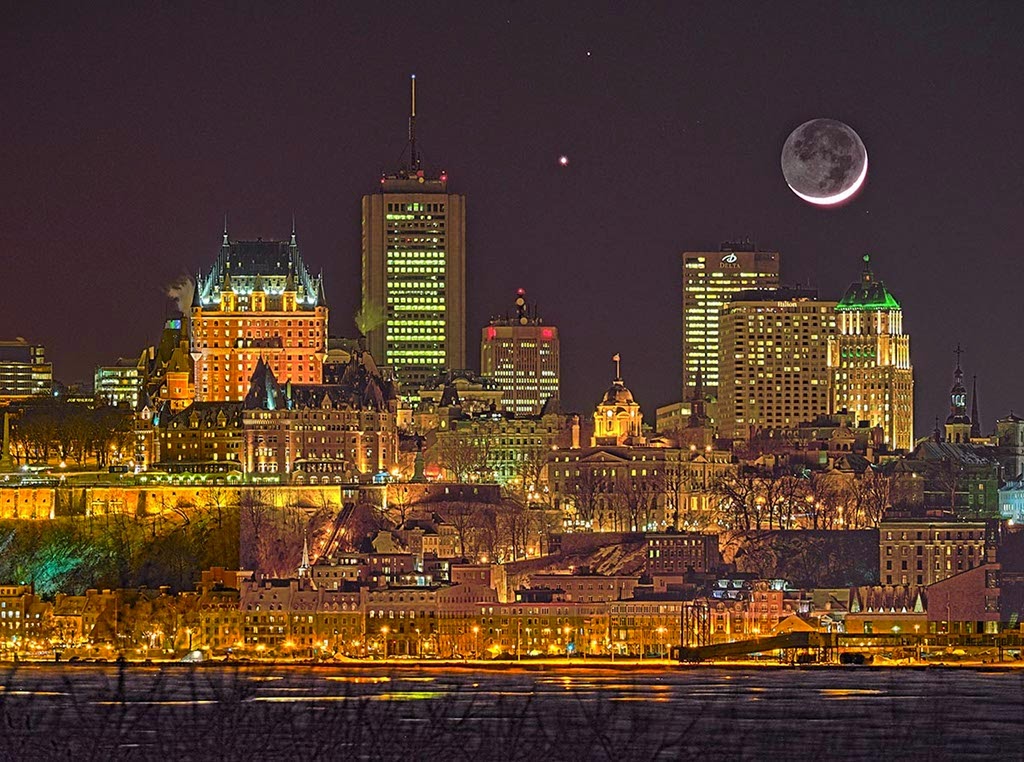 Moon-Venus-Mars Skyline
Image Credit & Copyright: Jay Ouellet
Explanation: Taken on February 20, five different exposures made in rapid succession were used to created this tantalizing telephoto image. In combination, they reveal a wide range of brightness visible to the eye on that frigid evening, from the urban glow of the Quebec City skyline to the triple conjunction of Moon, Venus and Mars. Shortly after sunset the young Moon shows off its bright crescent next to brilliant Venus. Fainter Mars is near the top of the frame. Though details in the Moon's sunlit crescent are washed out, features on the dark, shadowed part of the lunar disk are remarkably clear. Still lacking city lights the lunar night is illuminated solely by earthshine, light reflected from the sunlit side of planet Earth.
Posted by A Farmer at 7:45 PM 0 comments 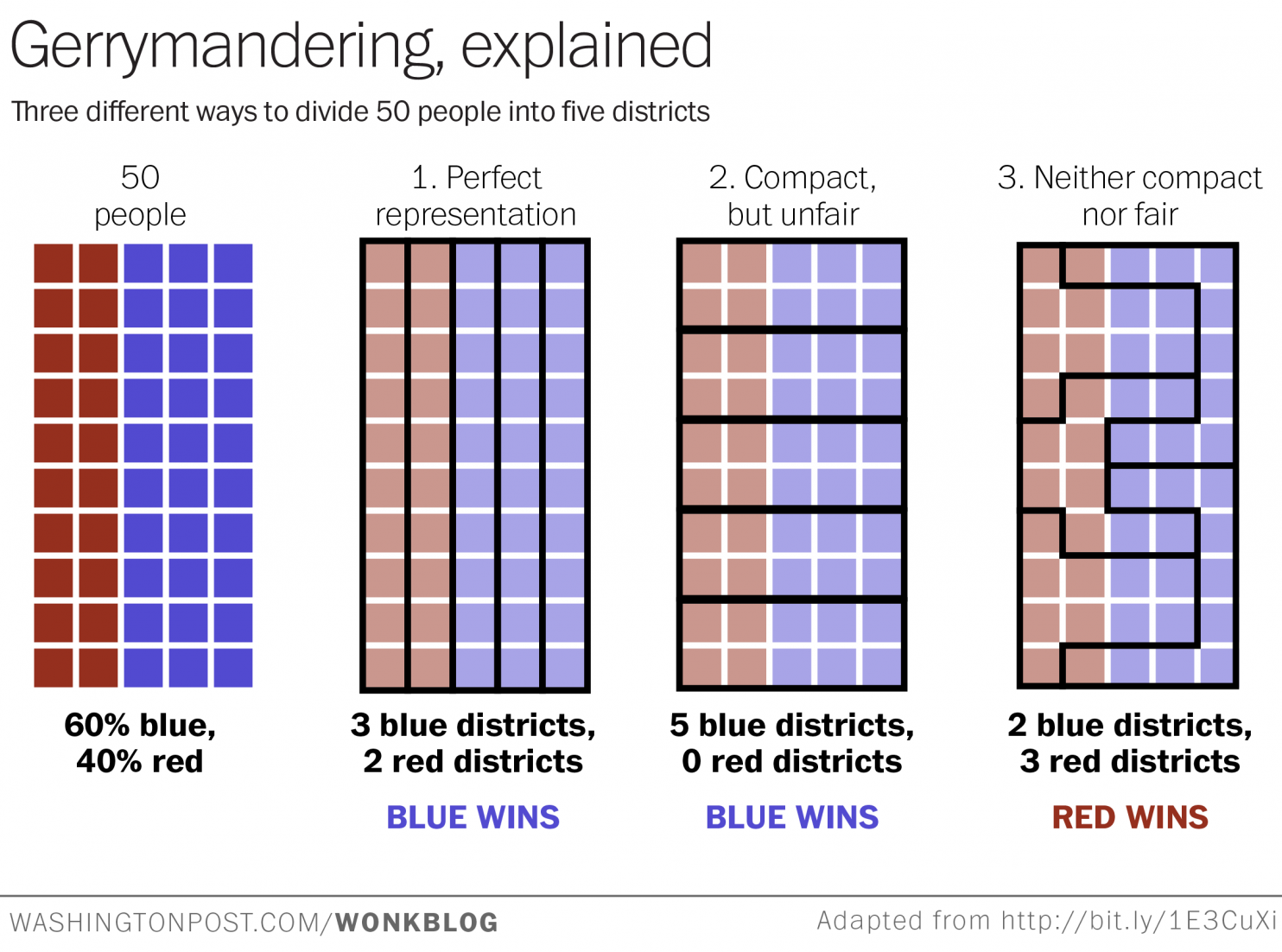 Email ThisBlogThis!Share to TwitterShare to FacebookShare to Pinterest
Labels: Civil society, Crooks and Liars, Gambling and other useful applications of math

For the shortest month of the year, February seemed awful long.  Now it is over, and here are some stories you can check out to welcome in March:

Is the College of Faith For Real? - SBNation

How Mice Turned Their Private Paradise Into A Terrifying Dystopia - io9

The Scarlet B: A Brief History of Buggery in Colonial America - Priceonomics.  Homer Simpson, for attempted insecticide and aggravated buggery, I sentence you to 200 hours community service.

Dark Leviathan - Aeon.  On Silk Road and the unworkability of libertarianism.

Why the Reagan wing of the GOP is worried - Washington Post.  The Kudlow quotes are ridiculous.  If there is a more worthless person to listen to than Larry Kudlow, I'm not sure who it would be. And Old Man Bush was right about trickle-down economics back in 1980.

A twofer from the Texas Tribune: Ag Commissioner Says Consumers Being "Screwed" and Signs of Neglect, Wear and Tear in State Government.  Small government in all its glory.  If things are this bad when the state's economy has been booming for a decade, how terrible will they be when the economy slows down?

Map: Do you live in Sheeptopia or Goatlandia - Washington Post.  The interactive map at the link gives populations of sheep and goats for each county. 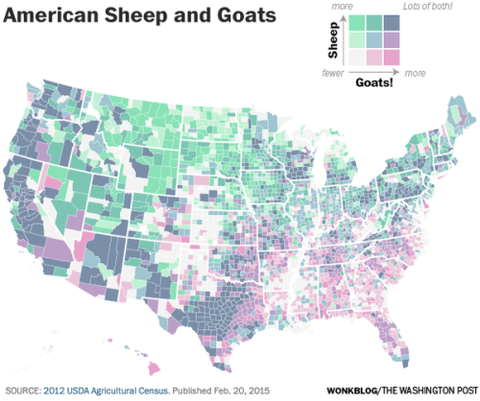 Email ThisBlogThis!Share to TwitterShare to FacebookShare to Pinterest
Labels: Ag economy, Beer and other gifts from God, Civil society, Food for Thought, News in the Midwest, Science and stuff, The Republican Party and other Brainwashing Cults
Newer Posts Older Posts Home
Subscribe to: Posts (Atom)