The Republican Party, In Summary

Alex Pareene goes over many of the things that make the Republican Party such a dysfunctional governing party:


If you want to understand intra-GOP warfare, the decision-making process of our president, the implosion of the Republican healthcare plan, and the rest of the politics of the Trump era, you don’t need to know about Russian espionage tactics, the state of the white working class, or even the beliefs of the “alt-right.” You pretty much just need to be in semi-regular contact with a white, reasonably comfortable, male retiree. We are now ruled by men who think and act very much like that ordinary man you might know, and if you want to know why they believe so many strange and terrible things, you can basically blame the fact that a large and lucrative industry is dedicated to lying to them....
The bottom-feeding amorality of the sorts of people who sponsored the right-wing press, and the crummy nature of the products and services sold, shows exactly who was supposed to be consuming it: suckers. Or, more specifically, trusting retirees, with a bit of disposable income, and a natural inclination to hate modernity and change—an inclination that could be heightened, radicalized, and exploited....
Rather rapidly, two things happened: First, Republicans realized they’d radicalized their base to a point where nothing they did in power could satisfy their most fervent constituents. Then—in a much more consequential development—a large portion of the Republican Congressional caucus became people who themselves consume garbage conservative media, and nothing else.
That, broadly, explains the dysfunction of the Obama era, post-Tea Party freakout. Congressional Republicans went from people who were able to turn their bullshit-hose on their constituents, in order to rile them up, to people who pointed it directly at themselves, mouths open.

The radicalization of the base actually occurred earlier than Pareene lets on.  He pinpoints it to the election of Obama, but, at least around here, it occurred before that.  I ran for office in 2006 because I saw a Republican party being taken over by know-nothing idiots who believe all kinds of non-factual bullshit.  That year was an election year for all of the statewide executive offices, and when there is a contested Republican primary election for Governor, my county's Republican party holds a County Convention.  As one of the candidates for office, I was invited to speak, or I otherwise wouldn't have attended. The opening address was given by John Boehner, who, at the time, was House Majority Leader (he would become Minority Leader after the 2006 election).  He rolled out a lot of red meat, but over the course of the day, his speech was one of the tamer ones given.  Also present was House Freedom Caucus founder and do-nothing government paycheck thief Jim Jordan, who was leaving the Ohio Senate to run for Congress that year.  I don't think he spoke, but if he did, it was while I was trying to keep from puking due to nerves before my speech.  I gave my speech, which didn't stick to my script, but generally focused on the need for more spending on education.  Not surprisingly, I was the only speaker who didn't mention guns, terrorism or abortion, and the only one who mentioned additional spending for education.

The delegates to the county convention were a mix of elected officials (especially township trustees), party volunteers and business people.  To best illustrate that the base had already been radicalized, all but two of the right-wing loon candidates for statewide office (State Attorney General candidate Betty Montgomery and Mike DeWine, who was the most sane candidate for U.S. Senate present-how times change) was endorsed by the delegates present.  Later that week, I stopped by the county Recorder's office.  He was the county political boss, and he confided to me that he and the other political wheel, the county Prosecutor, were terrified by how radical the base was, and how willing they were to back the morons who professed the greatest faith in the old-time right-wing media bullshit.  Those two were more in it for the power and the ability to hand out patronage, and they were shocked that the majority of the local party was drinking the Kool-Aid.

As Pareene points out, one of the main problems is that the true believers are now a substantial minority in Congress.  The problem is that they were already holding most of the positions at the state level.  Jim Jordan was, at that moment in 2006, making the leap from the state-level stage to the national stage.  My goal was to convince people that they shouldn't be electing morons like Jim Jordan and my opponent to government positions, but instead be electing people who were smart enough to vote for positions outside of the conservative dogma.  Unfortunately, I had a hard time telling my friends and neighbors that they had a lot of stupid political beliefs.  Instead, I tried to work my way around the edges of political discussions, and ended up absorbing a brutal shellacking from a rather dumb incumbent I ran against.

Pareene focuses on Trump's position as the Fox News viewer-in-chief, and how dangerous that is functional government.  The unfortunate thing is that this movement has been building for almost 40 years, and it has taken completely unqualified dumbfuck being elected President of the United States for most folks to realize that stupid people have gradually been filtering up from the grassroots, and now they control almost all the levers of power.  We've had plenty of time to realize what's happening, and the fact that I ran for office is evidence that it was completely obvious back in 2006.  Now we have to reap the whirlwind.
Posted by A Farmer at 10:56 PM 0 comments

Email ThisBlogThis!Share to TwitterShare to FacebookShare to Pinterest
Labels: Bad Ideas, Do as I say not as I do, Don't Drink the Tea, Idiots, Jerks, Local history, News in the Midwest, Short Memories, the crossroads of politics and stupidity, Things I Don't Understand

A small town newspaper editor in massive racist and total dimwit Steve King's birthplace won a Pulitzer Prize for editorial writing.  He frequently takes on King's anti-immigrant screeds, but his attacks on Big Ag won him the prize:


Reveling in the ethnic diversity of the high school football team, Cullen opined last fall: “How about those Tornadoes! The roster had all the colors of the rainbow, all races and creeds pulling together for the good of the team. Steve King wants to deport them because of their big cantaloupe calves, at least the Mexican ones.”
In another part of King’s district, such editorials might put a newspaper out of business. But in Storm Lake, the elementary school student body is nearly 90% children of color, and they speak 19 languages and dialects. The immigrant community here has come to feel a sense of protection that finds its clearest expression in the twice-weekly newspaper.
Cullen took on King again last month when the congressman asserted that America “can't restore our civilization with somebody else's babies,” a comment widely interpreted to mean the U.S. needs more children of Western European extraction. Cullen highlighted King’s college attendance — and failure to graduate.
“King said Monday that he is about defending Western civilization,” he wrote. “You remember that class in school? Neither does anyone else. King wasn’t at Northwest Missouri long enough to take it, I bet.”
That kind of straight talk won Cullen a Pulitzer Prize on Monday for editorial writing, with the award committee praising editorials “fueled by tenacious reporting, impressive expertise and engaging writing that successfully challenged powerful corporate agricultural interests in Iowa.”

More impressively, the newspaper is ridiculously young and is a non-daily:


The white-walled, flag-bedecked newspaper office also has a receptionist, sports writer, photographer and a desk where Cullen’s brother, John, runs the business side of the paper they founded in the early 1990s to compete with the local daily, the Storm Lake Pilot-Tribune. The town of 14,000 was once the smallest in the nation with two daily print newspapers before the Times switched to publishing only on Tuesdays and Thursdays.

Steve King is an embarrassment for Storm Lake, for Iowa's 4th district, for the state of Iowa, for the nation, and for all of humanity.  I am thankful that somebody is out there pointing out that King is a jackass to the voters who give him the platform to spout his stupidity.
Posted by A Farmer at 12:03 AM 0 comments

Email ThisBlogThis!Share to TwitterShare to FacebookShare to Pinterest
Labels: Civil society, Don't Drink the Tea, News in the Midwest, You Can't Make This Shit Up 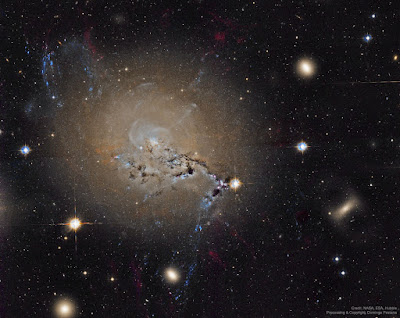 Filaments of Active Galaxy NGC 1275
Image Credit: Hubble Legacy Archive, ESA, NASA; Processing & Copyright: Domingo Pestana
Explanation: What keeps these filaments attached to this galaxy? The filaments persist in NGC 1275 even though the turmoil of galactic collisions should destroy them. First, active galaxy NGC 1275 is the central, dominant member of the large and relatively nearby Perseus Cluster of Galaxies. Wild-looking at visible wavelengths, the active galaxy is also a prodigious source of x-rays and radio emission. NGC 1275 accretes matter as entire galaxies fall into it, ultimately feeding a supermassive black hole at the galaxy's core. This composite image, recreated from archival Hubble Space Telescope data, highlights the resulting galactic debris and filaments of glowing gas, some up to 20,000 light-years long. Observations indicate that the structures, pushed out from the galaxy's center by the black hole's activity, are held together by magnetic fields. Also known as Perseus A, NGC 1275 spans over 100,000 light years and lies about 230 million light years away.
Posted by A Farmer at 6:08 AM 0 comments