The Milky Way Sets
Image Credit & Copyright: Juan Carlos Casado (TWAN, Earth and Stars)
Explanation: Under dark skies the setting of the Milky Way can be a dramatic sight. Stretching nearly parallel to the horizon, this rich, edge-on vista of our galaxy above the dusty Namibian desert stretches from bright, southern Centaurus (left) to Cepheus in the north (right). From early August, the digitally stitched, panoramic night skyscape captures the Milky Way's congeries of stars and rivers of cosmic dust, along with colors of nebulae not readily seen with the eye. Mars, Saturn, and Antares, visible even in more luminous night skies, form the the bright celestial triangle just touching the trees below the galaxy's central bulge. Of course, our own galaxy is not the only galaxy in the scene. Two other major members of our local group, the Andromeda Galaxy and the Triangulum Galaxy, lie near the right edge of the frame, beyond the arc of the setting Milky Way.
Posted by A Farmer at 9:07 PM 0 comments

Here are a handful of stories I've seen recently:

This College Football Team Doesn't Want To Join The Big Leagues - Bloomberg.  North Dakota State.  I wouldn't if I were them.

After 75 years, baseball in Bakersfield has struck out - LA Times

The Rise and Fall of Gerd Bonk, the World Champion of Doping - Vice Sports

The Start-up That Watches Corn Grow, From Orbit - The Atlantic

America's Real Mountain Of Cheese Is On Our Plates - The Salt

The Biggest Distillery You've Never Heard of is in Lawrenceburg, Indiana - Cincinnati Magazine

The Feudal Origins of America's Most Hated Tax - The Atlantic

Where the Confederacy is Rising Again - Politico

Trouble Signs for Donald Trump: Ambivalence in Exurbs - Wall Street Journal.  I'd be embarrassed if rural areas showed up on this chart. 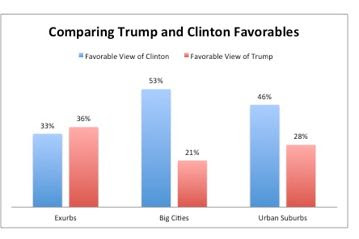 Email ThisBlogThis!Share to TwitterShare to FacebookShare to Pinterest
Labels: Ag economy, Beer and other gifts from God, Crooks and Liars, Food for Thought, Football, News in the Midwest, Reasons I'll never live in the South, Smaller is Better, the National pastime 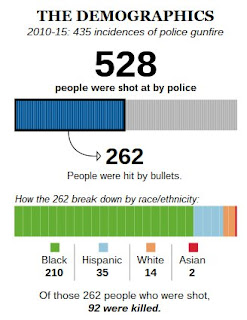 Every five days, on average, a Chicago police officer fired a gun at someone.
In 435 shootings over a recent six-year span, officers killed 92 people and wounded 170 others.
While a few of those incidents captured widespread attention, they occurred with such brutal regularity — and with scant information provided by police — that most have escaped public scrutiny.
Now, after months of struggles with Chicago police to get information through the Freedom of Information Act, the Chicago Tribune has compiled an unprecedented database of details of every time police fired a weapon from 2010 through 2015.
Analysis of that data revealed startling patterns about the officers who fired and the people they shot at.
Among the findings:
•At least 2,623 bullets were fired by police in 435 shootings. In 235 of those incidents, officers struck at least one person; in another 200 shootings, officers missed entirely.
•About four out of every five people shot by police were African-American males.
•About half of the officers involved in shootings were African-American or Hispanic.
•The officers who fired weren't rookies but, on average, had almost a decade of experience.
•Of the 520 officers who fired their weapons, more than 60 of them did so in more than one incident.
•The number of shootings by police — hits and misses — declined over the six years, from more than 100 in 2011 to 44 in 2015.
For years, examining the full scale of the problem in Chicago was impossible because the city refused to release most details about police-involved shootings.

That is quite a few shots fired.And quite a few misses.
Posted by A Farmer at 3:37 PM 2 comments