Barring unforeseen circumstances, we should finish harvest this afternoon.  I will try to summarize our harvest hijinks later today or tomorrow.  Before that, though, here are some interesting pieces for your weekend enjoyment:

Jose Canseco's Finger Fell off During a Poker Tournament - SBNation.  I don't care who you are, that headline is an attention-grabber.

The Weirdest Alcohol Laws in America - Gizmodo.  Indiana had some doozies back in the day, but didn't make the list.

Bottle Rocket - Texas Monthly.  How Lone Star became America's coolest beer for a period of time in those crazy Seventies.

All Dressed Up For Mars and Nowhere To Go - Matter.  A takedown of a really bad idea.

Satirist Onion Inc. Said to Hire Adviser For Sale - Bloomberg.  Say it ain't so. What value could an investment bank bring other than story material?

U.S. Navy Deploys Its First Laser Weapon in Persian Gulf - Bloomberg.  See also, Pentagon Plans To Spend Billions Upgrading Nuclear Program - All Things Considered.  3 bases sharing one wrench?  Is The Onion writing this stuff?  Remember, every dollar spent on nuclear weapons since Nagasaki has been spent on weapons which have never been and God-willing, will never ever be used.  Seems like a worthwhile investment to nobody.

How Obama Endangered Us All With Stuxnet - Daily Beast.  Nothing like being a first mover in cyber warfare.  Give other bad actors the excuse that the U.S. and Israel do it.  Nothing bad will come of that.

Why Men Love War - William Broyles Jr.  From long ago, but it showed up on naked capitalism links this week.

Cheese: Which Country Eats the Most? - Wall Street Journal.  Wow, the Journal made it through an entire piece detailing how much cheese Frenchmen consume without using the phrase, "cheese-eating surrender monkeys. (video here)"  Clearly, 2003 was a long time ago. 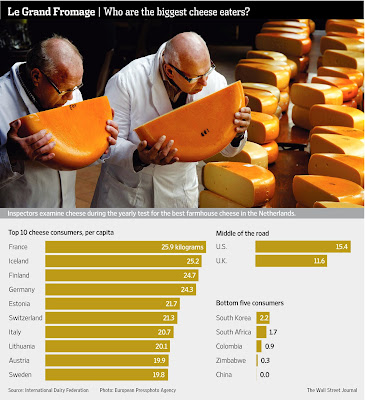 Email ThisBlogThis!Share to TwitterShare to FacebookShare to Pinterest
Labels: Ag economy, Bad Ideas, Beer and other gifts from God, Food for Thought, Global warming, the National pastime, War, War Criminals and the Security State, You Can't Make This Shit Up

By James Offer via Information is Beautiful:

Email ThisBlogThis!Share to TwitterShare to FacebookShare to Pinterest
Labels: Across the Atlantic, Bad Ideas, War

Email ThisBlogThis!Share to TwitterShare to FacebookShare to Pinterest
Labels: Across the Atlantic, cool stuff, the Church


The National Oceanic and Atmospheric Administration is shutting down cod fishing, from Provincetown, Mass., up to the Canadian border, in an effort to reverse plummeting numbers of the iconic fish in the Gulf of Maine.
Starting Thursday, no fishermen — commercial or recreational — may trawl or use certain large nets that might catch cod for the next six months. Local cod fishermen, who now face an uncertain future, say the government hasn't done enough to maintain cod populations, and they challenge NOAA's cod counts.
"This is uncalled for," says Joseph Orlando, a fishermen who trawls for cod off the coast of Gloucester, Mass., just north of Boston. Orlando and a friend had had been looking forward to fishing heavily for cod for the next two months, when holiday demand boosts prices. Now, that's off the table.
"There's more codfish out there. There's always been," he says. " I mean, their science is just absurd."
The science he's referring to is data from NOAA that finds haddock numbers are up, but cod are down. Michael Ruccio, an analyst with NOAA, says cod are at 3 to 4 percent of levels necessary for the population to be sustained.
"For cod to make a meaningful recovery, it's important to begin to protect their spawning activities, as well as where they aggregate and are found in large concentrations," Ruccio says.
The new federal rules expand areas where cod fishing was already banned. And accidental catches of cod are limited to 200 pounds per boat. But the Gulf of Maine is vast, and cod populations vary widely. That helps explain why fishermen like Orlando an NOAA scientists are coming up with two very different views of cod populations, says James Wilson, a professor of marine science and economics at the University of Maine.
"I live in Downeast Maine — there are no codfish in Downeast Maine," Wilson says. "There are a lot of codfish around Gloucester."
He adds, "When the feds report that, on average, there are no codfish, or very few, they're correct. When the fishermen in Gloucester report they see a lot of codfish, they're correct. The problem is trying to manage the system as if it was a single system when in fact, it is a system that has many different parts."...
The ban on cod fishing is for the current season and will be effective until May. But biologists, fishermen and regulators have been monitoring cod stocks for 40 years, and frequently changing rules. This most recent ban is the most drastic ever for cod.

The cod fishery has been decimated in recent decades.  It is a canary in the coalmine for other fisheries.
Posted by A Farmer at 9:16 AM 2 comments

Email ThisBlogThis!Share to TwitterShare to FacebookShare to Pinterest
Labels: Food for Thought, Mother Nature that Bitch, Rust Belt, Science and stuff, When It Rains It Pours

Getting Their Gerrymander On

So, the GOP controls the state House, 63-47, when the outcome with fairly-drawn districts should have been 56-54, with the Democrats in charge.

The Republicans have a 27-11 supermajority in the state Senate but in reality the split should be 19-19. Obviously, the vote totals indicate a 20-18 edge for the GOP was in the cards if the districts were equal, but that's a far cry from 27-11, which gives the Republicans 71 percent of the seats.

And the GOP has a substantial 9-5 margin in their favor among Michigan's congressional delegation, but the Democrats actually garnered more votes on Election Night and the House seats should be evenly divided, 7-7.

Ohio, Pennsylvania and North Carolina are similarly gerrymandered in both the state legislatures and congressional seats.  Then the assholes try to move bills to allocate Electoral College votes by congressional district.  It takes a special kind of scumbag to propose stealing an election like that.
Posted by A Farmer at 8:28 AM 0 comments

Email ThisBlogThis!Share to TwitterShare to FacebookShare to Pinterest
Labels: Civil society, Crooks and Liars, Government Bought And Sold, Jerks, The Republican Party and other Brainwashing Cults


This season counts as MIT’s football breakthrough. The Engineers are undefeated at 8-0. They won their first-ever New England Football Conference championship on Saturday. They also clinched a spot in the Division III playoffs. They would be favored to complete an undefeated regular season by beating the U.S. Coast Guard Academy on Saturday if betting on low-level college football were common.
To put MIT’s football achievement in terms that quantum physicists may understand: It’s like winning a Nobel Prize—only far more impressive.
MIT’s students, faculty and alumni won 80 Nobel Prizes between 1944 and 2013. In that time, MIT won a total of 80 football games, though it didn’t have a varsity team for decades. With all due respect to the school’s sailing and pistol teams, its only national champions in recent memory, MIT’s football team may be engineering the greatest athletic accomplishment in school history.

Good luck to the Engineers, but if they are unlucky enough to have to play Mount Union or Wisconsin-Whitewater, they're going to get trounced.  I'd stick with the science and engineering. 80 Nobel prizes?  Holy shit.  Also, speaking of Mount Union, they have a big game against undefeated John Carroll this weekend.  Go Blue Streaks, even though you might be in for a humbling.
Posted by A Farmer at 8:36 PM 0 comments

Email ThisBlogThis!Share to TwitterShare to FacebookShare to Pinterest
Labels: Engineering and Infrastructure, Football, Smaller is Better

A Few Voters Have Spoken 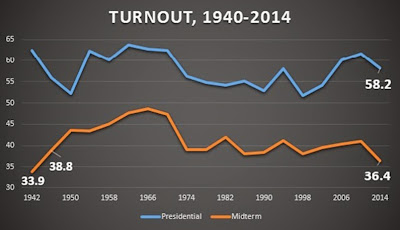 It's surprising to see Wisconsin so high up there.  You'd think that a governor who didn't come close to meeting the employment goals he promised, while neighboring states improved more, might have a tough time getting re-elected (especially one who is so unlikable [asshole]).  Apparently not.  Looking at these overall numbers, it is hard to see Congress as representing all Americans.  It definitely does over-represent rural Americans; of that I'm sure.
Posted by A Farmer at 8:16 AM 0 comments

Email ThisBlogThis!Share to TwitterShare to FacebookShare to Pinterest
Labels: Civil society, Don't Drink the Tea, Government Bought And Sold, Happy Days Aren't Here Again, News in the Midwest, When It Rains It Pours

The Nature of War

The Nature of War from StoryCorps on Vimeo.

Put Out To Pasture

Clearly, there is a new sheriff in town over in V.C.:


In a move that reflects the loosening posture of the Vatican on major social issues, conservative U.S. Cardinal Raymond Burke was removed by Pope Francis from yet another top post.
Burke, who has long been vocal about denying communion to Catholic politicians who support abortion, was dismissed as head of the Holy See's highest court and given the post of Patron of the Sovereign Military Order of Malta, a largely ceremonial job overseeing charity to seniors.
At 66, Burke is considered young by church hierarchy standards. The dismissal is a set-back to his Vatican career as well as a clear message from Pope Francis to those not hewing to his progressive view of the Catholic Church.
The move was expected by Vatican-watchers given that Burke, the former archbishop of St. Louis, had openly criticized Francis' less doctrinaire approach to the faith. Last year, Francis had removed Burke from the Congregation for Bishops, a group tasked with the appointment of new bishops worldwide.
n an interview with a Spanish Catholic weekly published last week, Burke said of the pope's leadership: "Many have expressed their concerns to me. … There is a strong sense that the church is like a ship without a rudder."

You'll hear a lot more talk of Francis as an Antipope from the Shiite Catholics.  I'm not going to feel too sorry for all the conservatives who are moaning and gnashing their teeth.
Posted by A Farmer at 8:21 AM 0 comments

Email ThisBlogThis!Share to TwitterShare to FacebookShare to Pinterest
Labels: Across the Atlantic, Do as I say not as I do, the Church

Who'd have guessed, the South and the Midwest: 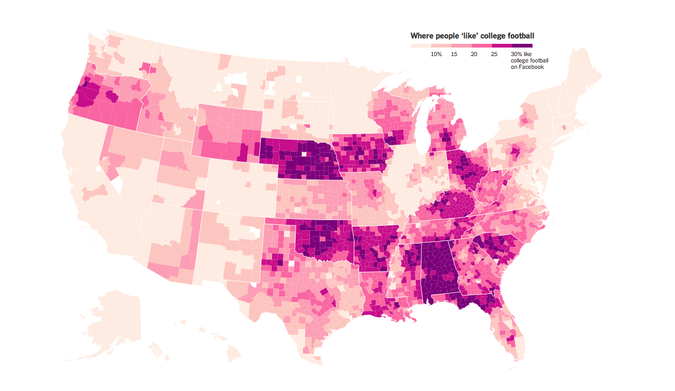 I'm surprised Ohio isn't bright like Nebraska.  Buckeyes fans here are like cockroaches in the South.
Posted by A Farmer at 7:04 AM 0 comments

Email ThisBlogThis!Share to TwitterShare to FacebookShare to Pinterest
Labels: Football, News in the Midwest, Useless Information 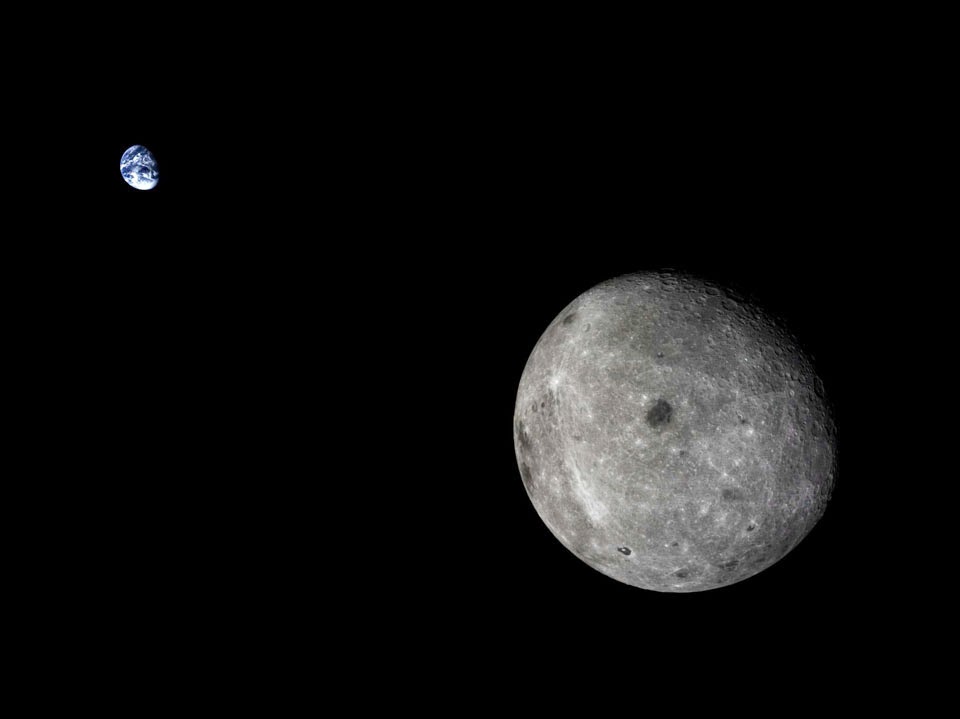 Moon and Earth from Chang'e 5-T1
Image Credit: Chinese National Space Administration, Xinhuanet
Explanation: Described at times as a big blue marble, from some vantage points Earth looks more like a small blue marble. Such was the case in this iconic image of the Earth and Moon system taken by the Chang'e 5-T1 mission last week. The Moon appears larger than the Earth because it was much closer to the spacecraft's camera. Displaying much of a surface usually hidden from Earth, the Moon appears dark and gray when compared to the more reflective and colorful planet that it orbits. The roboticChang'e 5-T1 spacecraft, predominantly on an engineering test mission, rounded the Moon last Tuesday returned to Earth on Friday.
Posted by A Farmer at 6:13 AM 0 comments