Yeah, it's an ad, but interesting nonetheless.

Email ThisBlogThis!Share to TwitterShare to FacebookShare to Pinterest
Labels: Fools and Their Money (Temporarily), Strange But True

Anything sculpted in butter is cool.
Posted by A Farmer at 10:01 PM 0 comments 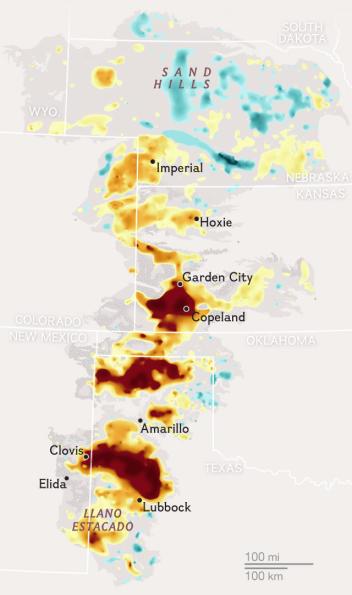 Well, the beef triangle sure stands out on the map.  And even though it isn't labeled on the map, Plainview is right in the middle of the giant red spot at the bottom.  That is the town that had a Cargill packing plant close down because there weren't enough cattle in the region to justify it in the heart of the 2013 drought.  In the end, there just wasn't enough water available to raise those cattle.  The article is depressing, in that the farmers in the region know they will pump the aquifer dry if they keep irrigating like they have been, but they just can't bring themselves to cut back.  It is a slowly-unfolding disaster.  Reminds me of climate change.
Posted by A Farmer at 10:31 PM 0 comments

Email ThisBlogThis!Share to TwitterShare to FacebookShare to Pinterest
Labels: Bad Ideas, Food for Thought, News in the Midwest, Things I Don't Understand 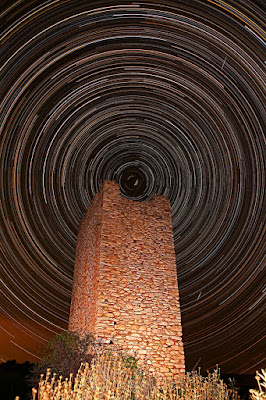 The North Celestial Tower
Image Credit & Copyright: Anthony Ayiomamitis (TWAN)
Explanation: If you climbed to the top of this 13th century stone tower, it looks like you could reach out and touch the North Celestial Pole, the point at the center of all the star trail arcs. The well-composed image with scattered meteor streaks was recorded over a period of five and half hours as a series of 45 second long exposures spanning the dark of the night on July 7/8. The exposures were made with a digital camera fixed to a tripod near Marathon, Greece, planet Earth. Of course, the graceful star trails reflect the Earth's daily rotation around its axis. By extension, the axis of rotation leads to the center of the concentric arcs in the night sky. Convenient for northern hemisphere night sky photographers and celestial navigators alike, the bright star Polaris is very close to the North Celestial Pole and so makes the short bright trail in the tower's central gap.
Posted by A Farmer at 8:41 PM 0 comments

Email ThisBlogThis!Share to TwitterShare to FacebookShare to Pinterest
Labels: cool stuff, Didn't Know That, News in the Midwest, Rust Belt

Here are a few stories that caught my eye:

The H-Bombs in Turkey - The New Yorker

The Most Important US Air Force Base You've Never Heard Of - The Nation.  Ramstein.

Where Did Agriculture Begin? Boy, It's Complicated - The Salt

The Racist History of Portland, America's Whitest City - The Atlantic.  I didn't realize Oregon once had a law not allowing blacks to live there.

The First Family of Competitive Lumberjacking - The New Yorker

Soil and Gas: Two Arkansas Families Battle for World Supremacy in Rototiller Racing - Wall Street Journal.  From the beginning of the month.

"He Steals, But He Gets Things Done" - Slate