The Science Behind Sparklers

Email ThisBlogThis!Share to TwitterShare to FacebookShare to Pinterest
Labels: Science and stuff

Happy Fourth of July!  Here are a few stories to light up your weekend:

My Hometown Baseball Stadium Just Burned Down. It Was My Childhood-and an American Relic - Slate.  Eugene, Oregon's Civic Stadium, which was built as a public-private partnership involving the WPA.

What the worst bird flu outbreak in U.S. history means for farms - Fortune

White House: We Have a Beef With GMO Regulations - The Salt.  I think they are a bit late on this.

The U.S. Is Producing a Record Amount of Milk and Dumping the Leftovers - Bloomberg.

The Father-Son Feud That Built an Empire of Food - Narratively

Raisin Grower Wins Supreme Court Battle - Modern Farmer.  It will be interesting how a massive raisin surplus is dealt with going forward.

The Mystery of St. Louis's Veiled Prophet - The Atlantic.  The weird roots of Fair St. Louis.  A look at power dynamics in St. Louis history.

Why the Christian right is going to war (with itself) - Salon 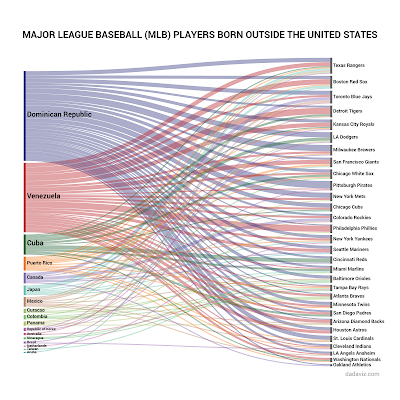 When In The Course of Human Events...

I love this annual tradition:

Email ThisBlogThis!Share to TwitterShare to FacebookShare to Pinterest
Labels: Civil society, US history

Why Mammals Have Penises

I thought maybe they'd say, "because God is obviously a guy."
Posted by A Farmer at 10:18 PM 0 comments

Email ThisBlogThis!Share to TwitterShare to FacebookShare to Pinterest
Labels: Beer and other gifts from God, Fun, Science and stuff 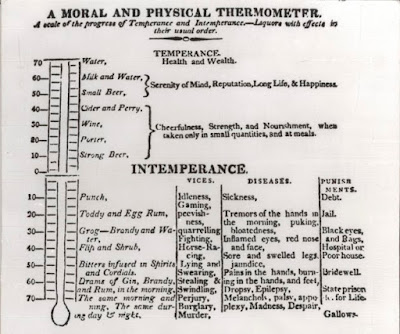 The Atlantic takes a look at alcohol-related medical advice of Benjamin Rush, signer of the Declaration of Independence:


Go ahead, have a small beer; it will bring “Serenity of Mind, Reputation, Long Life, & Happiness.” Even a strong beer would be fine, for that brings “Cheerfulness, Strength, and Nourishment,” as long as it’s only sipped at meals. So declared Benjamin Rush, one of the signers of the Declaration of Independence and the early republic’s most prominent physician. In his loquaciously named pamphlet, An Inquiry Into the Effects of Ardent Spirits on the Human Mind and Body, first published in 1784, Rush describes the “usual” downward spiral of drink. What starts as water and wine quickly turns into punches and toddies and cordials, ending with a hopeless vortex of gin, brandy, and rum, “day and night.”* In the pits of intemperance, one can expect such vices as “Idleness, Gaming, peevishness, quarrelling, Fighting, Horse-Racing, Lying and Swearing, Stealing and Swindling, Perjury, Burglary, [and] Murder,” with punishments including “Black eyes and Bags,” “State prison for Life,” or, worst of all, “Gallows."
Why did this 18th-century doctor care so much about moral consequences of drinking? “It was a pretty common belief among the founders [regarding] America’s experiment with republicanism, that the only way that we were going to keep it was through the virtue of our citizens,” said Bruce Bustard, the curator of a National Archives exhibit on American alcohol consumption. As Rush observed the effects of alcohol consumption, he had the young nation’s future in mind: People experiencing what he saw as the “Melancholy,” “Madness,” and “Despair” of intemperance surely wouldn’t make for very good participants in democracy.
Early America was also a much, much wetter place than it is now, modern frat culture notwithstanding. Instead of binge-drinking in short bursts, Americans often imbibed all day long. “Right after the Constitution is ratified, you could see the alcoholic consumption starting to go up,” said Bustard. Over the next four decades, Americans kept drinking steadily more, hitting a peak of 7.1 gallons of pure alcohol per person per year in 1830. By comparison, in 2013, Americans older than 14 each drank an average of 2.34 gallons of pure alcohol—an estimate which measures how much ethanol people consumed, regardless of how strong or weak their drinks were. Although some colonial-era beers might have been even weaker than today's light beers, people drank a lot more of them.

For once, I'll listen to the doctor.  Just beer for me, I'll leave the whiskey to others.
Posted by A Farmer at 9:52 PM 0 comments

Email ThisBlogThis!Share to TwitterShare to FacebookShare to Pinterest
Labels: Beer and other gifts from God, Food for Thought, Heart-healthy Living, US history

Bringing Back the Light

Bringing Back the Light from Mark Wyatt on Vimeo. 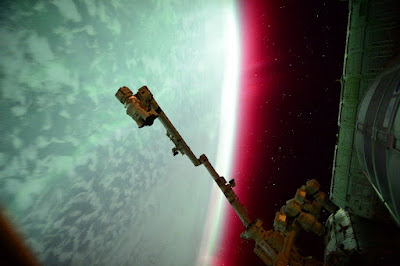 Planet Aurora
Image Credit: Scott Kelly, Expedition 44, NASA
Explanation: What bizarre alien planet is this ? It's planet Earth of course, seen through the shimmering glow of aurorae from the International Space Station. About 400 kilometers (250 miles) above, the orbiting station is itself within the upper realm of the auroral displays, also watched from the planet's surface on June 23rd. Aurorae have the signature colors of excited molecules and atoms at the low densities found at extreme altitudes. The eerie greenish glow of molecular oxygen dominates this view. But higher, just above the space station's horizon, is a rarer red band of aurora from atomic oxygen. The ongoing geomagnetic storm began after a coronal mass ejection's recent impact on Earth's magnetosphere.
Posted by A Farmer at 9:49 PM 0 comments

In These Times has an interesting piece about whether "Chicago is the next Detroit," and how Detroit got to where it was:


Detroit’s bankruptcy was not borne out of financial necessity and was not a foregone conclusion. It was a political decision made by state officials. Gov. Rick Snyder and the Michigan Legislature chose to push the distressed city over the edge in order to accomplish two otherwise difficult political goals: slashing pensions and regionalizing the Detroit Water and Sewerage Department. It was disaster capitalism at its finest.
Austerity hawks are now hoping to use the Detroit playbook in other cities to force the public to accept extreme measures to fix budget crises. And the bond markets seem to have finally settled on an answer to that question about which city will be the next Detroit: Chicago. Moody’s Investor Service, one of the three major credit rating agencies, just downgraded Chicago’s credit rating to junk level—the municipal equivalent of a subprime credit score, cautioning potential lenders that the city may not be able to pay them back—making it the lowest-rated major city in the country after Detroit....
During Detroit’s bankruptcy proceedings, Emergency Manager Kevyn Orr, who had been appointed by Snyder to run the city during its fiscal crisis, repeatedly asserted that the city had $18 billion in outstanding debt, so as to imply that the city had to come up with $18 billion in savings to get out of bankruptcy. This was not true.
First of all, that $18 billion number itself was inflated using non-standard accounting assumptions and by including debt that did not actually belong to the city itself, such as the debt of the Detroit Water and Sewerage Department. But more importantly, the $18 billion figure was irrelevant for the purposes of Chapter 9 bankruptcy, since there was never any expectation that the city pay all of its long-term debts immediately. What mattered, according to an analysis by the think-tank Demos, was the $198 million cash flow shortfall that the city faced that fiscal year. Detroit’s expenses were $198 million more than its revenues, so it could not pay its bills as they came due.
The $198 million shortfall could have been addressed fairly easily—in part, simply by undoing state actions that had pushed Detroit into bad financial straits in the first place. For example, Detroit had taken a major financial hit over the course of 2011 and 2012, when Snyder and the Michigan Legislature decided to cut annual state revenue sharing with the city by $67 million. Restoring that funding would have filled one-third of the city’s shortfall. Second, there were state-imposed restrictions on the city’s ability to raise local taxes, dating back to the 1990s. Lifting those restrictions would have allowed the city to raise taxes and bring in new revenue.
Or the legislature could have passed a law requiring suburban employers to automatically deduct city income tax for reverse commuters who lived in Detroit. The city instead had to rely on reverse commuters to voluntarily pay their taxes. According to a study commissioned by the Mayor’s Office, in 2009 alone, Detroit lost $142 million as a result of this loophole. But instead, the $18 billion figure was held up to create a greater sense of urgency in order to justify drastic cuts at the expense of public employees and wrest control of the water department from the city.

It amazes me that politicians (mainly of one party, but often helped by the other) can slash taxes, underfund pensions for decades and massively cut revenue sharing with local governments, then turn around and claim pensions have to be cut because the governments are short of cash to pay those pensions.  Before being able to renege on pension promises, those tax cuts should be rolled back.  However, that's not how the system works.  At this point, anything that can be done to benefit the wealthy and screw the working class will be done, and done as quickly as possible.  It is pretty sad, and it will be depressing to watch this playbook run over and over, but I think that is our future.  To be honest, I think job losses and a shrinking population made a Detroit bankruptcy eventually inevitable, but it was pretty clear that Republicans in Lansing saw their chance to make it happen sooner rather than later.  It will be interesting to see how Chicago plays out.  It is so much better off than Detroit, but it seems the fix is in to screw city employees and reward the well-connected.
Posted by A Farmer at 9:35 PM 0 comments