This Explains A Lot 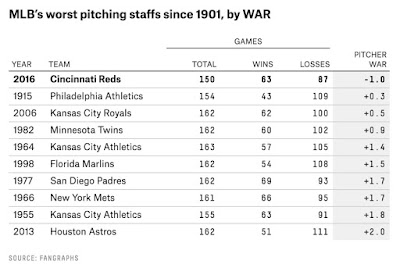 “And that’s a home run” — the Cubs’ third of the night.
Brennaman could be forgiven for his lack of enthusiasm. The Reds are 63-87, 32 games out of first place in the NL Central, and he’s had to make the same call 242 times so far this season. With two weeks left to play, the Reds’ pitchers have allowed the most home runs of any team in major league history. It’s a staggering total: Cincy hurlers allow an average of 1.6 homers every 9 innings, or one every 21.2 at-bats (meaning they effectively turned average NL hitters into Larry Doby or Joe Carter).
But it’s also symptomatic of a pitching staff that is, by another measure, the worst ever — and the only one in history that would have been better off being stocked with replacement-level players instead.
The Reds have struggled to build an effective staff for a looooong time, having broken league-average in fielding independent pitching only twice in the past 21 seasons. (And this is even after accounting for Cincinnati’s home parks, which have tended to inflate scoring.) But this season’s version has taken bad pitching and elevated it into some kind of twisted art form....
Somehow the Reds have been the only staff in MLB history to post a cumulative WAR below the replacement level. Not every Cincinnati hurler has been historically bad — Anthony DeSclafani has done admirable work, leading the team with 1.9 WAR, and Raisel Iglesias has 1.3 WAR with a superb 3.30 FIP. But by the logic of the theory that underpins WAR, the Reds’ sub-replacement tally means they could have stocked their entire pitching staff with nothing but freely available fringe players and AAA callups, and they’d have won an additional game. To find another team that could say that, you’d need to hark back 127 years (!!) to the 1890 Pittsburgh Alleghenys, whose 23-113 record still stands as second-worst in the long annals of major-league failure.

It has been a tremendously long season, but it has improved markedly after the all-star break.  And the Reds offense has managed to pull the Reds above several other teams.  Mercifully, the Reds' miserable season is almost over, and all I have to hope for to keep this from being an entirely miserable season is to have the evil Cubs be eliminated from the playoffs, hopefully short of the pennant.  God help us if they manage to win.
Posted by A Farmer at 8:45 PM 1 comments

Email ThisBlogThis!Share to TwitterShare to FacebookShare to Pinterest
Labels: Local history, News in the Midwest, Strange But True, the National pastime, You Can't Make This Shit Up

Collecting the World: Inside the Smithsonian

Collecting the World: Inside the Smithsonian from Great Big Story on Vimeo.


At the end of the Cold War both sides pledged to point their missiles at the open ocean. But it would take just minutes to change back to real targets.
That provides a small hedge against an accidental war triggered by a false alarm of the kind Perry experienced in 1979 when a watch officer mistakenly inserted a training tape into a computer.
William Perry: It looked like 200 ICBMs were on the way from the Soviet Union to the United States. Happily we got that situation figured out before we had to go to the president. But had we not he would have received a call at 3 o’clock in the morning and said, “Sir you have seven or eight minutes to decide whether to launch those before these missiles land on our ICBM silos.
David Martin: And what was the fail-safe there?  What stopped it from going to the president?
William Perry: What stopped it was an astute general who sensed something was wrong.

How many times have we almost nuked somebody accidentally?  It seems like a lot.  We were very lucky in the Cold War.
Posted by A Farmer at 10:47 PM 0 comments

Email ThisBlogThis!Share to TwitterShare to FacebookShare to Pinterest
Labels: Civil society, US history, War, You Can't Make This Shit Up 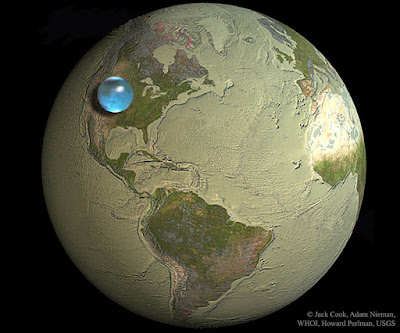 All the Water on Planet Earth
Illustration Credit & Copyright: Jack Cook, Adam Nieman, Woods Hole Oceanographic Institution, Howard Perlman, USGS
Explanation: How much of planet Earth is made of water? Very little, actually. Although oceans of water cover about 70 percent of Earth's surface, these oceans are shallow compared to the Earth's radius. The featured illustration shows what would happen if all of the water on or near the surface of the Earth were bunched up into a ball. The radius of this ball would be only about 700 kilometers, less than half the radius of the Earth's Moon, but slightly larger than Saturn's moon Rhea which, like many moons in our outer Solar System, is mostly water ice. How even this much water came to be on the Earth and whether any significant amount is trapped far beneath Earth's surface remain topics of research.

And, what, 3% of that is freshwater?  If my maths are working, that would be a sphere with a radius slightly under 218 km.
Posted by A Farmer at 10:10 PM 0 comments