Looking Toward An Uncertain Future

The day I've been dreading is almost here.  Tonight is the last night that Barack Obama will be president, and tomorrow the world's most famous eight-year-old-trapped-in-a-seventy-year-old's-body will succeed him.  I really have no idea what to expect for the next four years, but if I had to make a wager, I'd go with something between Bush-era failure and absolute disaster.  Hopefully I will be pleasantly surprised, but very little about the transition period gives me confidence that will be the case.  In fact, this Jonathan Bernstein column lends credence to my wager position:


There's no Trump appointee for any of the top State Department jobs below secretary nominee Rex Tillerson. No Trump appointee for any of the top Department of Defense jobs below retired general James Mattis. Treasury? Same story. Justice? It is one of two departments (along with, bizarrely, Commerce) where Trump has selected a deputy secretary. But no solicitor general, no one at civil rights, no one in the civil division, no one for the national security division.
And the same is true in department after department. Not to mention agencies without anyone at all nominated by the president-elect.
Overall, out of 690 positions requiring Senate confirmation tracked by the Washington Post and Partnership for Public Service, Trump has come up with only 28 people so far....
First of all, the government actually does things, and without all the jobs filled it's not apt to do them very well. Even if there's no catastrophic failure, lack of leadership will, as should be no surprise, yield inertia and low morale, leading to steadily worse performance....
If I had to guess, however, I'd say that the failure to get his administration up and running on time isn't a deliberate choice by Trump; he just has no idea what he's doing, and hasn't surrounded himself with people well-equipped to translate his impulses and his campaign commitments into a full-fledged government. This isn't exactly a surprise.

To drive home this point, farmers and rural voters were absolutely essential to getting Trump elected, and he didn't get around to announcing a Secretary of Agriculture until today.  Even worse, the career politicians in the Republican Party also have little to no interest in actually governing, and I would anticipate a train wreck to result from the "united" government we got out of the disastrous election of 2016.

On the other side of the aisle, the situation is just as bleak.  The Democrats have seemingly lost their collective minds over the election results.  They put on their tin foil hats and have been wailing and gnashing their teeth over the supposed Russian interference in the election.  I believe the Russians may have been behind hacks of the DNC, but I'm pretty sure they had less impact on the general election than the phase of the moon (which, if you've read previous posts, I put little faith in for anything).  Many of my neighbors were solidly Trump since the first Republican debate in August of 2015, and almost all of them were anti-Hillary since 1993.  Nothing that came out in September or October was going to change how they were going to cast their ballots.  Even worse for the Democrats, their party is more dead than Elvis in rural areas throughout the country.

While I am pretty pessimistic about the near-to-medium term outlook for our political situation and for civil society in general, I would like to take a minute to thank President Obama for his eight years of service for our country.  In the face of unprecedented opposition from Republicans, he was able to lead the nation with grace and dignity.  Even though I think he made some serious miscalculations, especially in believing he would be able to convince Republicans to work with him, I believe that history will judge him as one of the best Presidents of the post-WWII era.

In closing, in order to highlight the general decency of Obama, and of the American people in general, and to distract you a little bit from the narcissistic con man who will replace him at noon tomorrow, I would suggest you read this extremely well-written article about the people who sorted the letters and emails that Americans wrote to President Obama, and who decided which ones to pass on to the President to read, and who later drafted responses to these letters.  (h/t to my former boss for highlighting this story).  The article caused my eyes to fill with tears several times.  I challenge you to imagine the next President in soon-to-be citizen Barack Obama's place, and how he will handle the same kind of correspondence.  I wish our nation good luck as we proceed beyond tomorrow's change in leadership.  I really think we'll need it.
Posted by A Farmer at 8:55 PM 0 comments 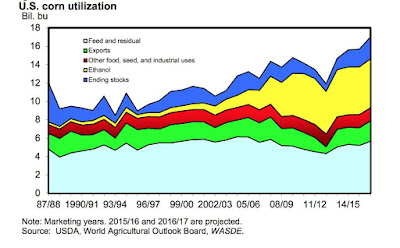 If a person has corn to sell, it may make him a little nervous that the candidate to head EPA and the chief reviewer of "unnecessary regulations" are both virulently opposed to the RFS.
Posted by A Farmer at 6:48 AM 0 comments

Email ThisBlogThis!Share to TwitterShare to FacebookShare to Pinterest
Labels: Ag economy, Bad Ideas, News in the Midwest, Strange But True


Wisconsin’s cash-strapped state parks are considering selling naming rights or sponsorships at some facilities, raising concerns pristine natural landscapes may soon be dotted with corporate logos.
​Wisconsin’s is one of a number of state-park systems looking for new ways to pay for their operations as their lawmakers cut public funding....
In Wisconsin, lawmakers in 2015 eliminated all state tax support for the Department of Natural Resources, which oversees its state parks. That led to a $1.4 million deficit and forced the department to come up with new ways to earn revenue.
In December, it submitted a number of proposals to state lawmakers, including raising campsite fees. It also proposed what it called a “limited path” for “sponsorships and advertising.” Some think that could mean selling naming rights for parks or park facilities, a move critics say is something more akin to what sports stadiums would do to raise money....
This November, voters in Alabama overwhelmingly approved a constitutional amendment that will block the state legislature from diverting funds from the state parks department. The legislature had redirected around $15 million from the department since 2010, leading to the closing of five Alabama state parks in 2015.
“We don’t get that money back, but we don’t have the threat of seeing our money taken from us in the future,” said Gregory M. Lein, the director of Alabama State Parks at the Department of Conservation and Natural Resources.
Despite that victory, Mr. Lein says budgets remain tight, and he is “open-minded” about working with private companies. One of the state parks that closed in 2015 has reopened under the control of a private company.

Back in 1995, when I visited a couple of state parks in Wisconsin, they already had a $10 a day parking fee in the parks, along with camping fees and I believe entrance fees.  Good to know that in an effort to give Herb Kohl and the Menard assholes tax cuts, state legislators have decided to not spend any tax dollars in the parks.  Give Republicans another 20 years and they'll be selling the parks to rich folks.  By the way, that privatized state park in Alabama was located in the Black Belt.  I'd have never guessed.  That civil society was nice back when we had it.
Posted by A Farmer at 9:06 PM 0 comments

Email ThisBlogThis!Share to TwitterShare to FacebookShare to Pinterest
Labels: Civil society, Don't Drink the Tea, Idiots, Jerks, News in the Midwest, The New Gilded Age, The rich get richer

Chart of the Day - Profanity Edition 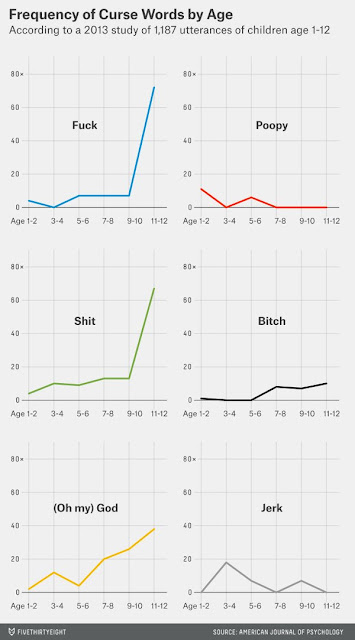 A study published last year in the American Journal of Psychology collected “data about the emergence of adult like swearing in children.” The authors, Timothy Jay and Kristin Jay, recorded observations of children ages 1 through 12 and adults using taboo utterances, which “were described as offensive words and phrases (e.g. fuck), insults or name calling (e.g. douchebag), and clinical terms (e.g. penis), as well as abusive expressions (e.g. I hate you).”...
If you’re wondering about how the frequency of words in a child’s vocabulary can decline, the breakdown provides some clues. For 1- and 2-year-olds, the most frequently used taboo word was “poop” or “poopy,” but it quickly falls in usage as children become older. The researchers’ data showed that “the taboo lexicon emerges early and shifts over time” in such a way that as kids age, they have more bad words in common with adults.

I think I was in third grade when I got in trouble for first dropping an F-bomb.  Slightly ahead of schedule, I guess.
Posted by A Farmer at 7:53 PM 0 comments

Email ThisBlogThis!Share to TwitterShare to FacebookShare to Pinterest
Labels: Civil society, Do as I say not as I do, Science and stuff 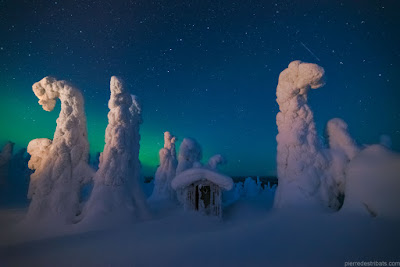 Sentinels of a Northern Sky
Image Credit & Copyright: Pierre Destribats
Explanation: Who guards the north? The featured picture was taken last March in Finnish Lapland where weather can include sub-freezing temperatures and driving snow. Surreal landscapes sometimes result, where white alien-looking sentinels seem to patrol the landscape. In actuality though, the aliens are snow-covered trees, and the red hut they seem to be guarding is an outhouse. Far in the distance, behind this uncommon Earthly vista, is a beautiful night sky which includes a green aurora, bright stars, and streaks of orbiting satellites. Of course, in the spring, the trees thaw and Lapland looks much different.
Posted by A Farmer at 6:39 AM 0 comments