End of May Weekend Links

I really can't believe June is almost here, but take a look at these stories before the year disappears:

How Things Break - The Iowa Review

A Lonely Life for Immigrants in America's Rust Belt - The Atlantic

The Myth of Victory - Aeon

The Senate Votes That Divided Hillary Clinton and Bernie Sanders - The Upshot.  War and bailout, amongst others.

Martin O'Malley Expected To Announce Democratic Presidential Bid - Bloomberg.  Anybody but Hillary or a Republican.

Here's How You Add 2.4 Million Jobs to the Economy - Bloomberg.  The Tea Party recovery. 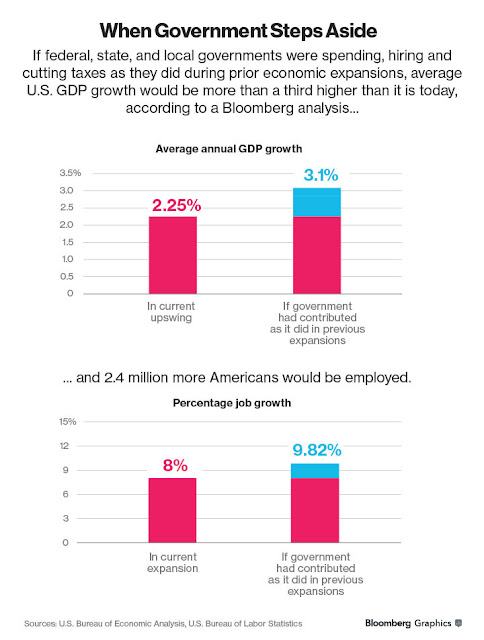 Email ThisBlogThis!Share to TwitterShare to FacebookShare to Pinterest
Labels: Don't Drink the Tea, Engineering and Infrastructure, Fools and Their Money (Temporarily), Government Bought And Sold, News in the Midwest, Science and stuff, the National pastime

The Fallen of World War II

Email ThisBlogThis!Share to TwitterShare to FacebookShare to Pinterest
Labels: People Don't Understand Numbers, Strange But True, The World Doesn't Revolve Around The U.S., US history, War 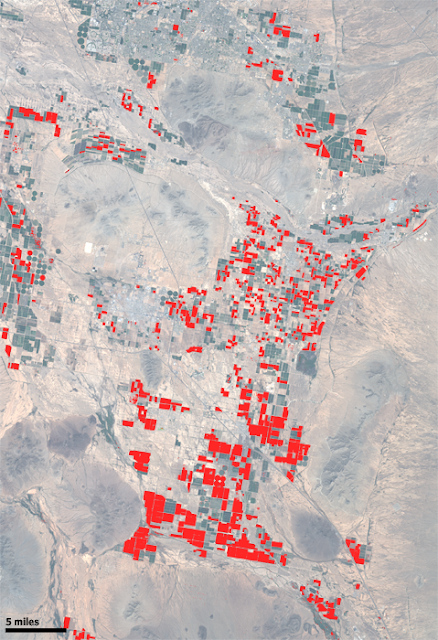 ProPublica has a fascinating piece on how federal crop insurance and direct payments keep cotton farmers working in Arizona, at least for now (h/t: the Cattle Baron) :


Growing cotton in the desert, long term, may be doomed. In Arizona, the price for cotton has been in decline, and with it the overall planting of the crop. But when the price spikes, as it did dramatically in 2010, the growers get busy. One thing has yet to change: the government’s willingness to back and protect those still wanting to be cotton farmers.
For years, the federal support came through subsidies and price protection cash put directly in the farmer’s pocket. In Arizona, those payments could total tens of millions of dollars a year. Today, the government’s aid comes chiefly in the form of insurance subsidies — reliable and robust protections against losses that many farmers and their lobbyists hoped would be every bit as effective as cold cash. And so every year more than 100,000 acres of cotton still get planted, making the crop the second-most popular in the state.
Thus, at a time when farmers in Arizona, California and other Western states might otherwise adapt to a water-short world, federal farm subsidies are helping preserve a system in which the thirstiest crops are grown in some of the driest places.
“The subsidies are distorting water usage throughout the West and providing an incentive to use more water than would be used in an open market,” said Bruce Babbitt, Arizona’s former governor and a former U.S. Secretary of the Interior.

The western water issues fascinate me.  Living and raising crops in the desert just blow my mind. 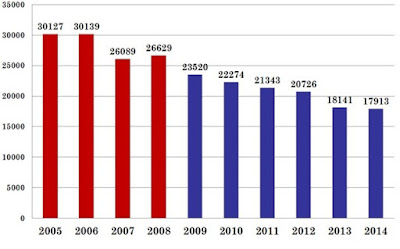 It may not work for other cities, but the program put in place in Cincinnati appears to be a successful, if challenging approach to addressing hostility between citizens and police, and reform of the criminal justice system:


Looking back, the results of Cincinnati’s reform efforts are startling. Between 1999 and 2014, Cincinnati saw a 69 percent reduction in police use-of-force incidents, a 42 percent reduction in citizen complaints and a 56 percent reduction in citizen injuries during encounters with police, according to a report by Robin S. Engel and M. Murat Ozer of the Institute of Crime Science at the University of Cincinnati. Violent crimes dropped from a high of 4,137 in the year after the riots, to 2,352 last year. Misdemeanor arrests dropped from 41,708 in 2000 to 17,913 last year.
Yet it might not be so simple to adopt Cincinnati’s changes in other cities. It took a long time—five to ten years, by some counts—to get police to actually buy into the reforms. Nobody likes it when somebody comes into their workplace and tells them how to do their job. The changes Cincinnati adopted were nothing short of a complete turnaround in how the city approached incarceration, crime and its relationship with its residents. And to make sure they were adopted, the federal government had to apply constant pressure, reminding all parties involved about the need to stay vigilant about reform.
“In the early 2000s and late 90s, Cincinnati was just a hotbed of problems, and we got the city and the police department to agree to certain reforms,” said Mike Brickner, senior policy director with the ACLU of Ohio, which sued the city shortly before the riots over discriminatory policing practices. “It’s gratifying for me to see that people are coming back several years later and recognizing how successful it was.”

The whole article is worth reading.  Considering the skepticism shown by all involved parties at the beginning of the initiative, it is amazing the program is now being held up as an example for places like Cleveland, Baltimore and St. Louis County.
Posted by A Farmer at 1:15 PM 0 comments 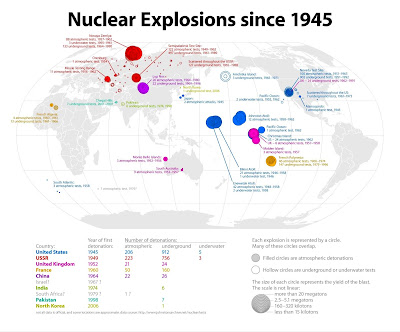 USA! USA! USA! Iran, how dare you think of joining all these other countries we've done nothing to when they got nukes (Israel, looking at you).
Posted by A Farmer at 7:16 AM 0 comments

Email ThisBlogThis!Share to TwitterShare to FacebookShare to Pinterest
Labels: Do as I say not as I do, Fools and Their Money (Temporarily), Jerks, Short Memories 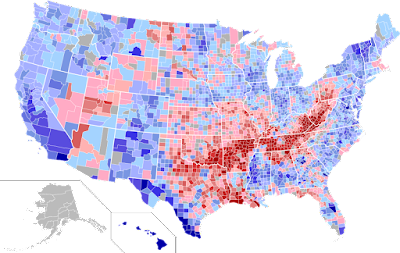 In 2004, George W. Bush was reelected president with 51 percent of the vote. Eight years later, Barack Obama was reelected with 51 percent of the vote. But that national 2 percent swing toward the Democrats wasn't distributed evenly across the country. As Patstuart2's fascinating county-by-county swing map shows, there were huge regional variations.
He explains that darker blue means the county got more Democratic between 2004 and 2012, while darker red means it got more Republican. The lightest shade shows a 1 percent swing. A little darker means 5 percent. A little darker than that means 9 percent, and so on up to a 25 percent swing. In sum, it paints a fascinating picture of the changing face of American politics.

Who thinks race played a part in these results, on both sides? This guy [thumbs pointed at chest], for one.
Posted by A Farmer at 8:49 PM 2 comments

It Wasn't Kool-Aid at Jonestown 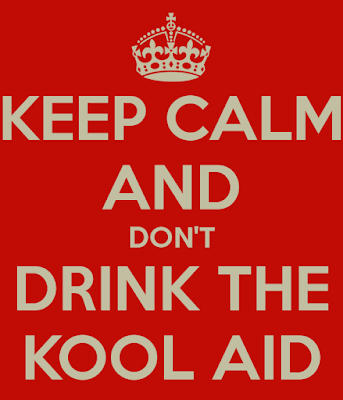 
The phrase "drinking the Kool-Aid" refers to the 1978 Jonestown massacre, in which more than 900 people committed mass suicide by drinking a flavored drink mixed with Valium, chloral hydrate, cyanite, and Phenergan....
The surprising thing is that all the sources on the massacre say the powder was the grape variety of another drink brand, Flavor Aid. Made by Jel-Sert, Flavor Aid appeared in one of the first newspaper reports on the massacre. The claim is repeated in the 1982 book Raven: The Untold Story of the Rev. Jim Jones and His People. And surviving witnesses said that Flavor Aid was the drink used, not Kool-Aid.
With the evidence so clear, why did the phrase "drinking the Kool-Aid" emerge? Mental Floss suggests Kool-Aid's role as being a genericized name for all flavored drinks, the popularity of The Electric Kool-Aid Acid Test, and other factors made it easier to remember "Kool-Aid" than "Flavor Aid."

Since Vox is well-known for creative sponsored content, do you think this is maybe a sponsored news story by Kraft Foods? It does seem odd to me that the article spends a sizable amount of time discouraging readers from using the phrase, "drink the Kool-Aid."  Anyway, as my label, "don't drink the tea" indicates, I think the phrase is useful as a way to call into question group-think.
Posted by A Farmer at 7:56 AM 0 comments

Email ThisBlogThis!Share to TwitterShare to FacebookShare to Pinterest
Labels: Didn't Know That, Don't Drink the Tea, Strange But True 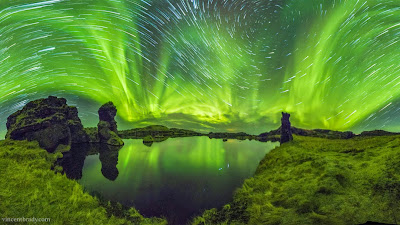 Auroras and Star Trails over Iceland
Image Credit & Copyright: Vincent Brady
Explanation: It was one of the quietest nights of aurora in weeks. Even so, in northern- Iceland during last November, faint auroras lit up the sky every clear night. The featured 360-degree panorama is the digital fusion of four wide-angle cameras each simultaneously taking 101 shots over 42 minutes. In the foreground is serene Lake Myvatn dotted with picturesque rock formations left over from ancient lava flows. Low green auroras sweep across the sky above showing impressive complexity near the horizon. Stars far in the distance appear to show unusual trails -- as the Earth turned -- because early exposures were artificially faded.
Posted by A Farmer at 7:43 AM 0 comments