Waters of the U.S., Regulatory Overreach and Republican Propaganda

I was half asleep this morning when I heard an exchange on NPR that brought up the Waters of the U.S. rule:


Rand Paul:....So yes, I'll continue to advocate for Congress asserting its role, for not letting the president run amok through executive order. Domestically, most of that has been an overreach by President Obama, though, instituting regulations that could have never gotten through Congress. And I am confident that I think in the first hundred days we'll get dozens and dozens, hopefully, of onerous job-killing regulations removed.
GREENE: What's one regulation that would give people an idea of what you're talking about, a single regulation that you can really point to and you think limits jobs?
PAUL: There's a regulation called Waters of the U.S. There was a cattle rancher, Andy Johnson, out in Fort Bridger, Wyo. He was fined $37,000 a day for building a cattle pond that he had a local permit for. You should not have to get a federal permit to build a cattle pond. This is the kind of thing that has kind of run amok in our country is the federal government trying to regulate individual local issues like land use.

I honestly thought Senator Paul said that the rancher spent $37,000 building a cattle pond, and that he ran afoul of regulators under the Waters of the U.S. rule.  Based on my limited experience applying for Section 404 (Army Corps of Engineers) and Section 401 (EPA) permits, I guessed that the rancher either dammed a stream to create the pond, or turned a wetland into a pond.  Both were seriously frowned upon under the Nationwide Permit format for Section 404 permits.  My first thought beyond that was that even if this was a massive ranch, I can't imagine very many jobs were killed based on not allowing said pond.  An also, that the Waters of the U.S. rule isn't born of Barack Obama, but has been an object of conflict for over 40 years.  The final rule that was issued in 2015 claimed the same jurisdiction for the WOTUS rule that I worked under over 10 years ago.

I figured I ought to do a google search on the case cited by Senator Paul, since I had the rancher's name and location.  I managed to turn up this New York Times story:


The sun was sinking and the brook trout were biting, so Andy Johnson and his daughter Aspen, 6, stepped onto their sun-bleached pier, hooked some mealworms and cast their lines into the most infamous pond in the West.

It is just a splotch of placid water amid endless ripples of grazing land here in western Wyoming. But in the two years since Mr. Johnson dammed a small creek running through his front yard to create the pond, it has become an emblem for conservative groups and local governments that are fighting what Senator Michael B. Enzi called a “regulatory war” with the Obama administration over environmental issues ranging from water quality to gas drilling, coal power plants to sage grouse....
In a January 2014 violation notice, the agency said Mr. Johnson had violated the Clean Water Act by digging out Six Mile Creek and dumping in tons of river rocks without getting necessary federal permits. The agency ordered him to take steps to restore the creek under the supervision of environmental officials, or face accumulating fines of as much as $37,500 a day.
Mr. Johnson refused.
He argued that he had gotten full approvals from Wyoming officials, and said the federal government had no business using national water laws to make decisions about the creek that meanders through the family’s eight-acre property. Mr. Johnson and his wife, Katie, had spent $50,000 — most of their savings, they said — to create the pond to water their 10 head of cattle and four horses. Dismantling it now would be ruinously expensive and destroy what has become a tiny oasis for birds and wildlife, they said.

While I'm not going to try to justify the regulations on dredged and fill material in waters of the United States (because I never understood them enough to be able to make that case), I think it is a stretch to say that Mr. Johnson is a rancher who built this pond to water his cattle.  I'm pretty sure he built this pond for recreational use, but justified it by claiming it was a stock pond, either when he applied to the state, or after federal officials sent him the violation notice.  Nobody would spend $50,000 to build a pond to water 10 head of cattle and four horses.  For example, I keep 11 brood cows, a bull and a heifer, along with 13 calves at one farm.  To water these cattle, I have 3 100-gallon stock tanks that each cost about $100.  If I was smart, I'd plumb in one of the Ritchie cattle fountains that sit in the barn, instead of using the 3 tanks.  Plus, the guy owns 8 acres.  Building a pond on 10 percent of his land just so he can water his livestock doesn't make any sense whatsoever.  I would guess this is why the EPA went after the guy so hard.  They knew he was using an agricultural loophole to justify a pond that made no sense whatsoever as an agricultural use.  Just look at the pictures in the New York Times article.  Would you want cattle walking down those rocky shores all day every day to get water?  My experience is that EPA will generally work with you as best as they can, as long as you try to follow the law, and don't try to pull a fast one on them.  This especially applies when jobs are at stake.

This story is an example of what makes the Waters of the U.S. rule so controversial, but also of how Republicans generally overstate how damaging environmental regulations are.  I do struggle over the limits of how small of projects EPA and the Army Corps ought to regulate, but this example is probably the worst possible one that Republicans could use for "job-killing regulations."  Also, my experience ten years ago would have been that this project would not meet the qualifications for a Nationwide Permit, so the fact that Wyoming issued it a permit calls into question the ability of the state to manage the permit process.  It would seem that the EPA action was extreme, but Senator Paul claims the EPA fined Mr. Johnson $37,000 a day, while the New York Times article states that EPA didn't issue any fines.  The threat of fines is an important part of a carrot and stick approach EPA has to use to ensure compliance with regulations.  Taking that threat away makes it unlikely that EPA would be able to enforce regulations that are current law.  Likewise, various politicians and lobbyists are quoted in the Times article saying that the feds overstepped their bounds in this case.  But, like I mentioned earlier, building the pond violates regulations that have been on the books for 15 years or so.  The whole issue about the Waters of the U.S. rule is about trying to redefine an established rule that was thrown out by the Supreme Court because they thought it was unclear.  But it is a basic jurisdictional definition.  It has to be clarified to make the law work.  I'm all for Republicans making the case for changing the regulations, but if they are going to roll back the rule to only applying to navigable waters, they will allow tremendous damage to be done to the environment.

In the end, I think Republicans need to make their case without exaggerating the facts in the examples they present.  Don't claim that a pond is constructed to water livestock, when it almost certainly isn't, or it is likely that stock pond exemption will go by the wayside.  This would hurt farmers and ranchers who actually are building stock ponds.  Don't justify scrapping a law as job-killing, when the example you give involves zero jobs.  I'm surprised that after thirty years of blaming regulations for a shrinking middle class, Republicans have so few concrete examples of "job-killing" regulations.  I'm also surprised by how effective their poorly-defined and poorly-reasoned arguments are.  This case is one which is one of their best examples of a regulation that can be considered over-reaching, but it is one of the worst examples of a regulation that is killing jobs.  Please, Republicans, do a better job of arguing your case.
Posted by A Farmer at 11:31 PM 0 comments

Email ThisBlogThis!Share to TwitterShare to FacebookShare to Pinterest
Labels: Civil society, Don't Drink the Tea, News in the Midwest, Strange But True 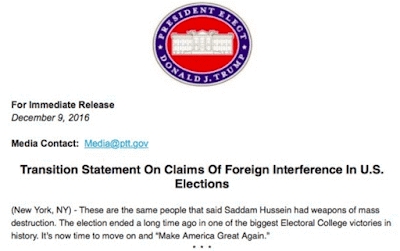 
The amazing part of that press release from the transition team is that the most truthful part of the whole thing is the attack on the CIA, and the least truthful is in quotations ("Make America Great Again").  Trump will never be able to handle the fact that he won fewer overall votes than Hillary Clinton, even though he was elected president.  Even more amazing is that he won more electoral votes than George W. Bush did in either of his election victories, even though Bush won the popular vote by 2.4% in 2004.  The fact is, Trump didn't win a landslide victory no matter how you look at it, but just like when W was in office, that will in no way mitigate the damage done to the country by Republicans while he is in power.
Posted by A Farmer at 10:24 AM 0 comments

Email ThisBlogThis!Share to TwitterShare to FacebookShare to Pinterest
Labels: Crooks and Liars, Don't Drink the Tea, People Don't Understand Numbers, the crossroads of politics and stupidity, You Can't Make This Shit Up

Here are some interesting stories from the last couple of weeks:

"Gosh, It's Beautiful" - ESPN.  On how a boring video game became the most valuable ever.

Battle lines in California's water wars are redrawn in Trump era - Financial Times.  Mass-scale agriculture in California is doomed to failure in the era of climate change, but that won't stop it until it does too much damage to be corrected.

Big Farms Are Getting Bigger And Most Small Farms Aren't Really Farms At All - Fivethirtyeight.  I never knew that any property with enough land to be able to produce $1000 in farm revenue was counted as a farm.  That is a stupid and useless governmental definition.

After A Sour Decade, Florida Citrus May Be Near A Comeback - The Salt.  Scientists make inroads against citrus greening.

If Waffle House Is Closed, It's Time To Panic - Fivethirtyeight

How the Twinkie Made the Superrich Even Richer - New York Times.  Private equity sucking away money that used to be shared with workers.

Rationale for Texas' Largest Corporate Welfare Program was a 'Typographical Error' - Texas Observer.  Growth in Texas won't continue forever.  When it slows down, Texans will wish the state had taxed businesses and invested those revenues in education and infrastructure.

Religious Right Reinvigorated by Donald Trump - Wall Street Journal.  The continued link between anti-gay religious figures and take-from-the-poor-and-give-to-the-rich politicians is a guaranteed loser for Christianity and the country.  Expect religious attendance to continue to decline.

The Rust Belt Needs a Bailout.  A Big One. - Bloomberg.  I don't think that bailing out the Chicago and Illinois pension systems is the best place to throw money at the Rust Belt, but some crazy person does.

Why Blue States are the Real Tea Party - New York Times.  This will be more important as the rural economy continues to struggle despite Donald Trump's useless promises.

Email ThisBlogThis!Share to TwitterShare to FacebookShare to Pinterest
Labels: Crooks and Liars, Don't Drink the Tea, Food for Thought, Fools and Their Money (Temporarily), Science and stuff, Smaller is Better, Strange But True, The rich get richer
Newer Posts Older Posts Home
Subscribe to: Posts (Atom)