Some interesting reads if you've gotten your fill of football already this weekend:

Wojo's Pigskin Picks: Michigan-OSU has lost sizzle, needs spark - Detroit News.  Usually he can be counted on for some good slams on Ohio State.  I guess Michigan losing every year has taken the fun out of it for him.

Introducing the Weekly Glean - Modern Farmer.  A new weekly set of links to ag news.  One of this week's links- Benjamin Franklin's letter promoting the turkey as the national bird.

Can Breeders Cure What Ails Our Breast-Heavy Turkeys? - The Salt

Energy Quakes As OPEC Stands Pat - Wall Street Journal. See also, OPEC might get last laugh on oil - MarketWatch.   I was tempted to short Continental Resources and other shale plays, but because I thought production would peak, not because prices would crater.  Didn't do it, though.

A Massacre in the Family - Wall Street Journal.  Sand Creek.

'God is not a magician': Pope says Christians should believe in evolution and Big Bang - Raw Story 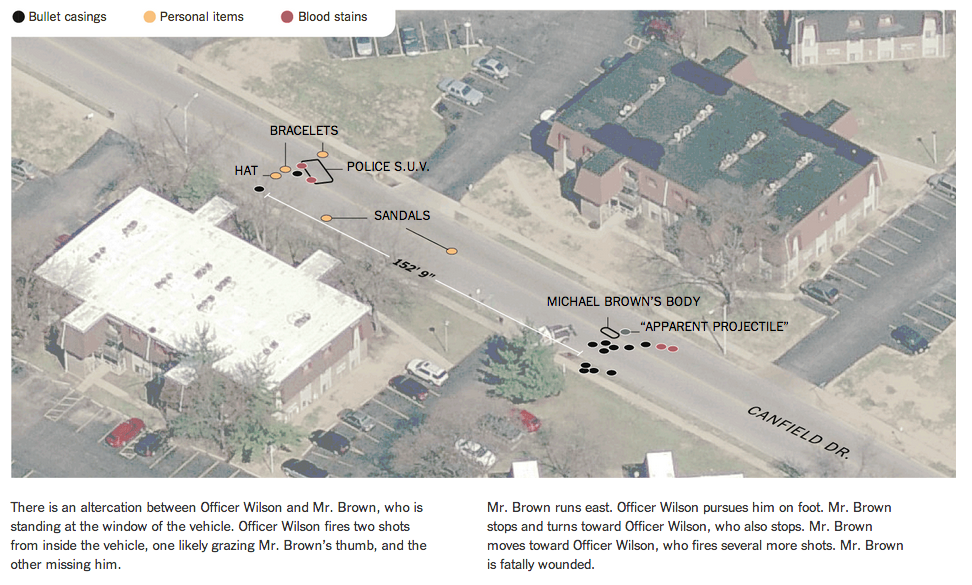 I'd hate to see what qualifies as a non-self-defense shooting.
Posted by A Farmer at 11:11 AM 0 comments

Email ThisBlogThis!Share to TwitterShare to FacebookShare to Pinterest
Labels: Civil society, You Can't Make This Shit Up


Cole Cooper built a special barn at the family farm in Fort Recovery, Ohio, where he housed an initial presidential flock of 66 turkeys representing four breeds: bronze, blue slates, Spanish blacks and broad breasted whites.
Cooper Farms raises 5 million turkeys year-round to help supply the average 16.5 pounds of turkey consumed per person in the U.S. each year. The Thanksgiving and Christmas season accounts for 35% to 40% of annual turkey sales, primarily of whole birds, but Cooper Farms stays busy all year selling sliced deli meat, turkey burgers and other turkey products.
With this expertise, Cooper launched a specialized grooming process that included exposing the birds to a variety of musical styles — country crooner Kenny Chesney is among Cole’s favorites — and getting them accustomed to humans by inviting visitors to the farm and acclimating them to travel by transporting the animals to nearby events in Cleveland, Cincinnati and Columbus.
Cooper's 1-year-old son, Chase, even pitched in to prepare the flock for the jungles of Washington by screaming and chasing the birds about.
The farmer slowly whittled down the initial group of 66 to six finalists now in contention for the job, but he says there are three birds — all broad breasted whites — that stand out in his mind.
“I’ve got three in there that are my really close candidates — the feathering is right, they look good, stand tall and are full of color.”

Cooper raises an amazing number of turkeys in west central Ohio.  A little more about the Presidential pardon from the article:


The NTF began gifting the President with a turkey during President Truman’s administration. In 1989, President George H.W. Bush began the tradition of offering a formal pardon to the bird.
Since 2010, after receiving their commuted sentences, the National Turkeys were shipped to Mount Vernon, Va., to live out their final years.
This year they will retire to Morven Park in Leesburg, Va.
But the birds' post-pardoning lifespans are often short. Since Thanksgiving turkeys are bred for consumption, their extreme weight produces health complications.
Only one of the 2013 turkeys, Popcorn and Caramel, is still living. Popcorn died of natural causes in July, but Caramel remains, thanks to a weight-loss regimen.

America's obesity epidemic definitely includes livestock.
Posted by A Farmer at 10:32 AM 0 comments

Email ThisBlogThis!Share to TwitterShare to FacebookShare to Pinterest
Labels: Ag news, Food for Thought, Local history, News in the Midwest 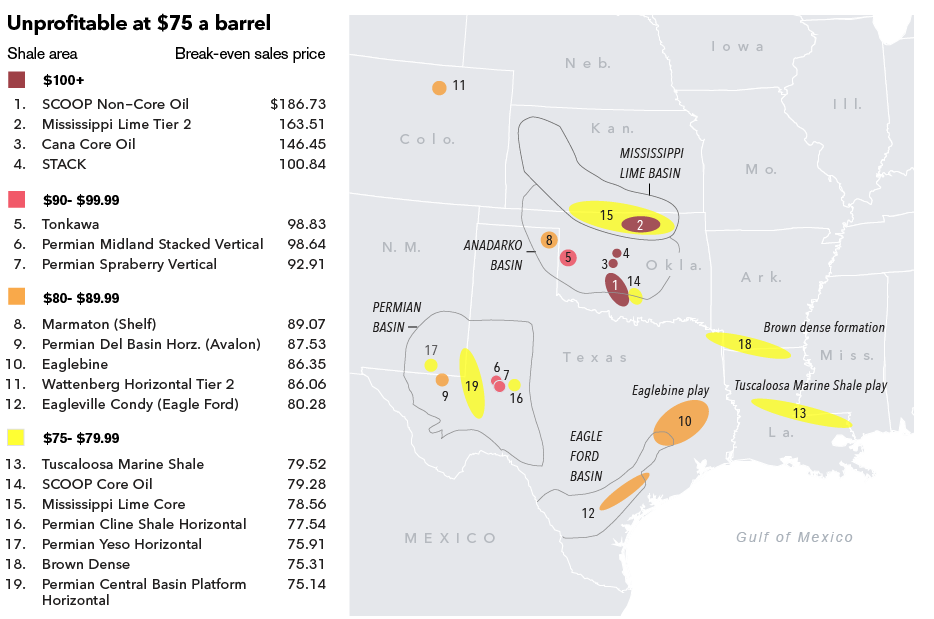 The Saudis are perfectly willing to watch the price of oil keep falling to see if they can’t drive some of those U.S. companies out of business. So the game becomes how low can they go. Recent analysis by Bloomberg New Energy Finance finds that 19 regions across Texas, Oklahoma, Louisiana, Kansas, and Arkansas stop being profitable at $75 a barrel. Which is roughly where things are at the moment.
But those regions account for only about 400,000 barrels of daily production. The real test will be if prices dip below $70. That could start eating into the profits of Bakken production and the hottest parts of Texas in the Permian Basin and Eagle Ford shale regions, which account for more than half of all U.S. production.

Very interesting.
Posted by A Farmer at 9:46 AM 0 comments

I Want to be a Yes Man

Email ThisBlogThis!Share to TwitterShare to FacebookShare to Pinterest
Labels: Civil society, Do as I say not as I do, Don't Drink the Tea

Ferguson Speaks: A Communique from Ferguson

Ferguson Speaks: A Communique From Ferguson from FitzGibbon Media on Vimeo.

The Case for Napping at Work

Damn you, Sixty Minutes, this video works fine.
Posted by A Farmer at 9:41 PM 0 comments 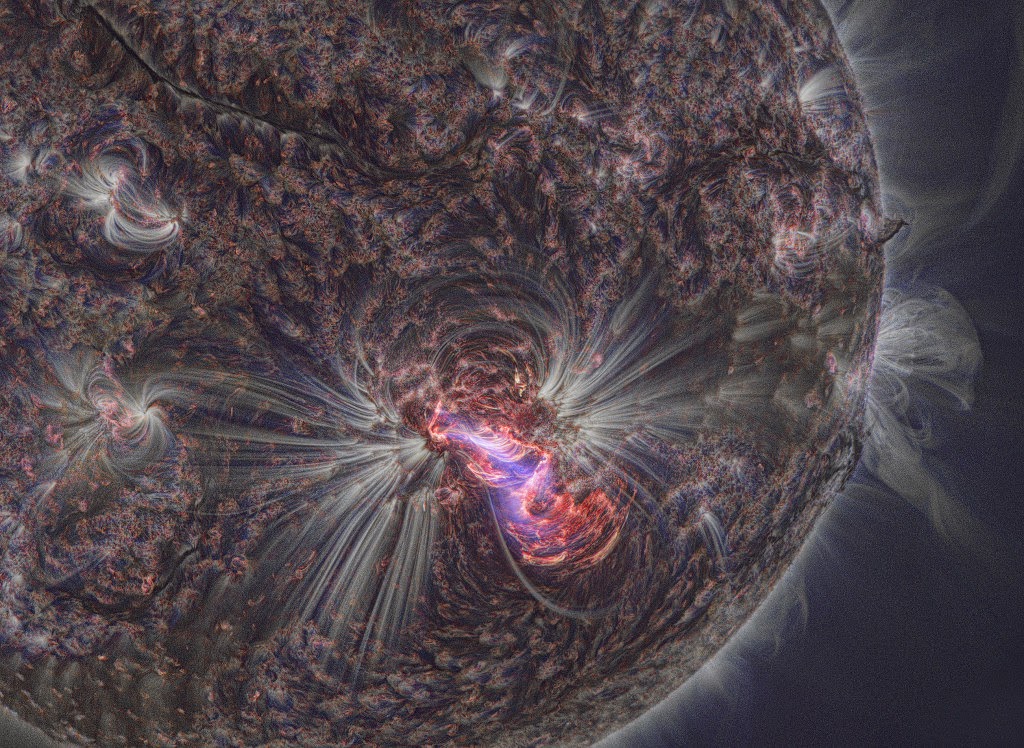 Solar Flare from a Sharper Sun
Image Credit: Solar Dynamics Observatory/AIA, NASA
Processing: NAFE by Miloslav Druckmuller (Brno University of Technology)
Explanation: Solar active region AR2192 was the largest recorded sunspot group of the last 24 years. Before rotating off the Earth-facing side of the Sun at the end of October, it produced a whopping six energetic X-class flares. Its most intense flare was captured on October 24 in this stunning view from the orbiting Solar Dynamics Observatory. The scene is a color combination of images made at three different wavelengths of extreme ultraviolet light; 193 angstroms shown in blue, 171 angstroms in white, and 304 angstroms in red. The emission, from highly ionized Iron and Helium atoms, traces magnetic field lines looping through the hot plasma of the Sun's outer chromosphere and corona. Beneath, the cooler solar photosphere appears dark at extreme ultraviolet wavelengths. The exceptionally sharp composite image has been processed with a new mathematical algorithm (NAFE) that adapts to noise and brightness in extreme ultraviolet image data to reliably enhance small details.
Posted by A Farmer at 9:22 PM 0 comments

We will never be able to keep up all the failing infrastructure we have. Yet, we keep building new suburbs with new (generally crappy and car-based) infrastructure.  I don't understand.

PS. The video doesn't appear to be working on my computer. Not sure what the problem is, since the imbed is is 480x270 (which would appear to be bigger than what the error says is the minimum).
Posted by A Farmer at 8:02 PM 2 comments 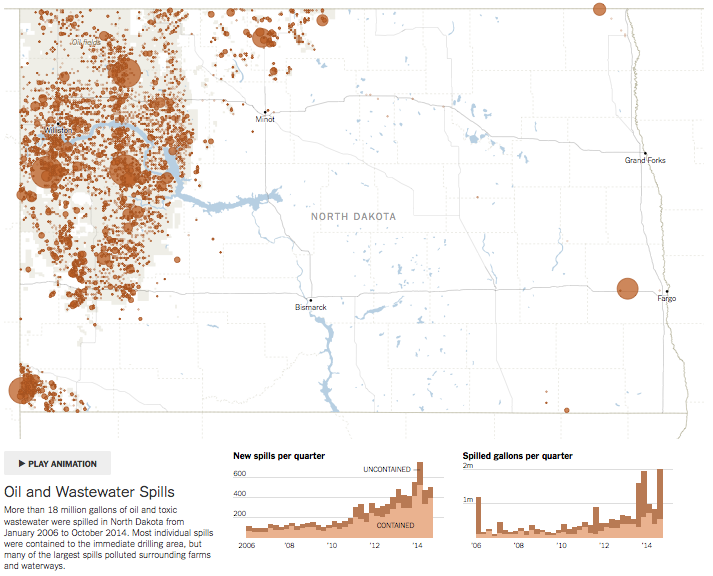 The New York Times investigates how North Dakota regulates the Bakken oil field, and how that impacts company actions:

The Times found that the Industrial Commission wields its power to penalize the industry only as a last resort. It rarely pursues formal complaints and typically settles those for about 10 percent of the assessed penalties. Since 2006, the commission has collected an estimated $1.1 million in fines. This is a pittance compared with the $33 million (including some reimbursements for cleanups) collected by Texas’ equivalent authority over roughly the same period, when Texas produced four times the oil.
“We’re spoiling the child by sparing the rod,” said Daryl Peterson, a farmer who has filed a complaint seeking to compel the state to punish oil companies for spills that contaminated his land. “We should be using the sword, not the feather.”
North Dakota’s oil and gas regulatory setup is highly unusual in that it puts three top elected officials directly in charge of an industry that, through its executives and political action committees, can and does contribute to the officials’ campaigns. Mr. Hamm and other Continental officials, for instance, have contributed $39,900 to the commissioners since 2010. John B. Hess, chief executive of Hess Oil, the state’s second-biggest oil producer, contributed $25,000 to Gov. Jack Dalrymple in 2012.
State regulators say they deliberately choose a collaborative rather than punitive approach because they view the large independent companies that dominate the Bakken as responsible and as their necessary allies in policing the oil fields. They prefer to work alongside industry to develop new guidelines or regulations when problems like overflowing waste, radioactive waste, leaking pipelines, and flaring gas become too glaring to ignore.
Mr. Dalrymple’s office said in a statement: “The North Dakota Industrial Commission has adopted some of the most stringent oil and gas production regulations in the country to enhance protections for our water, air and land. At the same time, the state has significantly increased staffing to enforce environmental protections. Our track record is one of increased regulation and oversight.”
Researchers who study government enforcement generally conclude that “the cooperative approach doesn’t seem to generate results” while “the evidence shows that increased monitoring and increased enforcement will reduce the incidence of oil spills,” said Mark A. Cohen, a Vanderbilt University professor who led a team advising the National Commission on the BP Deepwater Horizon Oil Spill and Offshore Drilling.
With spills steadily rising in North Dakota, evidence gathered by The Times suggests that the cooperative approach is not working that well for the state, where the Industrial Commission shares industry oversight with the state’s Health Department and federal agencies.
One environmental incident for every 11 wells in 2006, for instance, became one for every six last year, The Times found.
Through early October of this year, companies reported 3.8 million gallons spilled, nearly as much as in 2011 and 2012 combined.
Over all, more than 18.4 million gallons of oils and chemicals spilled, leaked or misted into the air, soil and waters of North Dakota from 2006 through early October 2014. (In addition, the oil industry reported spilling 5.2 million gallons of nontoxic substances, mostly fresh water, which can alter the environment and carry contaminants.)
The spill numbers derive from estimates, and sometimes serious underestimates, reported to the state by the industry.

The article notes that business culture in the United States may also be at fault:

Statoil, a multinational company whose largest shareholder is the Norwegian government, now ranks as the state’s fifth-biggest producer. With a professed goal of “zero incidents, zero releases,” according to Russell Rankin, its regional manager, it has reported no blowouts and has the best record in the state among the major producers in terms of how many gallons of oil it produces for each incident.
Based on volume, Statoil has produced 9,000 gallons of oil for every gallon of spillage; Continental has produced 3,500. Statoil contained some 70 percent of its spill volume to production sites. Continental contained less than half, The Times found.
In its written response, Continental disputed The Times’s “math,” but did not respond further after it was sent a spreadsheet of reported incidents that formed the basis for the findings.

I read the state Industrial Commission's monthly production data release, and have been amazed to see the report thanking folks for commenting on federal regulatory rule proposals encouraging a "states first" policy.  The state's hands-off regulatory approach will greatly benefit oil producers and saddle farmers, landowners and permanent residents with long-term pollution problems when the boom is over and done.  All I can say is that I'm glad the boom is there and not here.