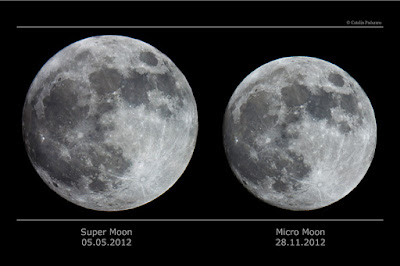 Super Moon vs. Micro Moon
Image Credit & Copyright: Catalin Paduraru
Explanation: What is so super about tomorrow's supermoon? Tomorrow, a full moon will occur that appears slightly larger and brighter than usual. The reason is that the Moon's fully illuminated phase occurs within a short time from perigee - when the Moon is its closest to the Earth in its elliptical orbit. Although the precise conditions that define a supermoon vary, tomorrow's supermoon will undoubtedly qualify because it will be the closest, largest, and brightest full moon in over 65 years. One reason supermoons are popular is because they are so easy to see -- just go outside at sunset and watch an impressive full moon rise! Since perigee actually occurs tomorrow morning, tonight's full moon, visible starting at sunset, should also be impressive. Pictured here, a supermoon from 2012 is compared to a micromoon -- when a full Moon occurs near the furthest part of the Moon's orbit -- so that it appears smaller and dimmer than usual. Given many definitions, at least one supermoon occurs each year, with another one coming next month (moon-th). However, a full moon will not come this close to Earth again until 2034.

Is it just me, or has this Super Moon hype seemingly come out of nowhere in the last few years.  I don't remember hearing about this phenomena in the past.  I remember recent hype about eclipses, planetary alignments and meteor showers being similar to past buzz, but I just don't remember the Super Moon hype before about 3 or 4 years ago.  Oh, wait, here is some data:

So the first real mention of a super moon took place approximately 2 months after this blog started.  How did we get by without hyping the size of the full moon prior to 2011?
Posted by A Farmer at 4:09 AM 0 comments

Since the Democratic Party has been gutted by anti-Obama sentiment in the middle of the country, along with gerrymandering and the extremely pro-rural setup of the Senate, the most likely check on the power of President Trump (almost a week in, and I still can't believe I am typing that crazy shit.  Thanks, neighbors.) will be Republicans in Congress.  Looking over what actual policy proposals Trump has laid out, I think we can guess which ones are likely to actually happen. There are two areas in which Trump and Congress will almost certainly find common ground: taxes and military spending.
On taxes, we are almost certain to see ridiculous tax cut plans put into place.  All the squabbling will be over details.  Here is the Wall Street Journal on possible tax cuts:


“Because Mr. Trump has made it clear he wants to do tax reform in the first 100 days, House Republicans are going to be ready,” Rep. Kevin Brady, chairman of the House Ways and Means Committee, said in an interview Wednesday. “I’m confident that this blueprint will grow the economy significantly, simplify the tax code for families and lower their tax burden and bust up the IRS, redesign it so it’s focused on customer service.”...
Republicans in Washington expect swift action on the most significant proposed tax-code changes since 1986, which offer what they see as an accelerant to U.S. economic growth. They would lighten tax burdens on high-income individuals and multinational corporations and repeal the 100-year-old estate tax.....
Mr. Trump called for reducing the top tax rate on individuals from 39.6% to 33% and for cutting the corporate tax rate from 35% to 15%. Businesses that now report their profits on their owners’ individual returns would get the 15% rate and would likely pay a second layer if the owner takes money out of the business.
He would also eliminate personal exemptions and the head-of-household filing status used by single parents, and his proposed breaks for child-care costs wouldn’t be enough to prevent a net tax increase for millions of families...
The House plan, by contrast, sets the corporate tax rate at 20% and the rate for other businesses at 25%. Either plan needs rules to prevent individuals from making their wages and other ordinary income look like lower-taxed business income, a problem that Mr. Trump’s campaign acknowledged and said Congress would solve.
The House plan would also create a international-border-adjusted corporate tax that applies depending on the location of sales, not profits. That is complicated, and it may face objections from retailers and financial-services companies as well as a potential challenge from the World Trade Organization.
Both plans would significantly increase budget deficits and give the largest tax cuts to high-income households. Mr. Trump’s plan would reduce federal revenue by $6.2 trillion over a decade, according to the Tax Policy Center, a project of the Brookings Institution and the Urban Institute. The top 1% of households would get a 13.5% boost in after-tax income, compared with a 4.1% rise for the entire population.
Republicans say their plans would spur growth due to the tax-rate cuts and the ability to write off capital expenses immediately instead of depreciating them over time.

Ok,so on the tax cut side, it looks like a lot will get done, and very little of it will be beneficial to the regular voters in struggling Rust Belt states who foisted President Trump on the rest of the nation.  However, business people will reap a massive windfall, and Republicans are going to make sure that the IRS is powerless to stop massive tax evasion.  I'm especially curious about the elimination of depreciation.  Maybe it is just me, but something like that would seem likely to make things such as rental properties a nearly perfect tax shelter.  Any simple purchase which ties up tens or hundreds of thousands of dollars of a year's profit, and promises positive cash flow going forward would seem like a no-brainer.  Currently, I believe a rental property is depreciated over something like 27 1/2 years.  Maybe they are only talking about capital equipment, but it is hard to tell by the way the article is written.  Besides, Congress has been pretty consistent in extending Section 179 bonus depreciation annually since the Bush stimulus plan back in 2001.  Recently, that has been capped at $500,000, which to me seems like more than what the average small business profit would amount to.  I would think that expanding that to all business would be a tax loophole that would be massive enough that most businesses wouldn't have to pay taxes almost any year.  If that were the case, I'll let you guess where that tax burden would fall.

As for defense spending, the only thing that will hold Republicans back from throwing crazy money at defense contractors will be the massive deficits created when those tax plans go into place, although St. Ronnie proved that Republicans don't care about deficits when it comes to tax cuts and defense spending.  I would expect the next four years to be Christmas for defense contractors and the Wall Street banks that handle Treasury security sales.

Things get a little more interesting when it comes to infrastructure spending.  Here is a place I somewhat agree with Trump.  The U.S. does have a massive need for spending on infrastructure improvements.   We have a massive amount of infrastructure put in place in the early and mid-20th century that is reaching the end of its useful life.  Unfortunately, I see Trump spending billions to turn JFK airport into a massive version of one of Saddam Hussein's palaces, as opposed to replacing failing century-old water and sewer lines in Rust Belt cities.  Likewise, Republicans in Congress have consistently avoided locating the over $2 billion in outlays required to fully-fund the Brent Spence Bridge in Cincinnati, for example, which Trump promised to fund at a campaign stop immediately before the election.  According to Trump, those funds may come from money currently paid by the United States to the United Nations.  A quick google search indicates that would be about $8 billion dollars a year, so if Trump made very many promises like the one in Cincinnati, Congress is going to have to find significant funds.  They have not been willing to do that, but maybe that was because Obama was evil.  That or they just don't give a shit about infrastructure spending outside of the regular Highway Bill, which, while massive, is still tremendously underfunded, and all-to-often neglects more expensive repairs and replacements in favor of shiny new things, and by its nature only funds transportation projects without addressing utilities.  This will be one of the most interesting things to watch in the Trump-Congress interactions.  Based on where votes for president came from and what Congressional Republicans' priorities are, I would expect mass transit to suffer badly.

As for the border wall, I'm not sure what if anything will happen here.  Private property owners will probably be the most resistant to expansion of the border fence, and there are already hundreds of miles of wall and fence in the areas where it is easiest to build.  After 15 years of talk about border security, I really don't expect to see much if anything done here.  However, the desires of voters who put Trump in office may outweigh common sense.

Finally, there are entitlements.  Paul Ryan and the Freedom Caucus really are chomping at the bit to generally destroy Social Security and Medicare, while Trump has promised to make them more generous to beneficiaries.  Trump's plan is wildly expensive, while the Ryan plan is ridiculously unpopular, especially with the elderly white Rust Belt voters who put all these clowns in office.  I would see little to nothing done here, except possibly some change that takes place far down the line and screws over my baby bust generation instead of the boomer cohort.

To wrap things up, expect President Trump and Congress to agree to a ridiculous tax plan which widens income inequality and creates huge revenue holes in the budget, and adds to them a sizable increase in defense spending and cuts to programs intended to benefit the poor.  These changes are popular with Trump, with the GOP Congress and with the suburban and rural white voters in the South, the Rust Belt and the Plains and Mountain West states.  Expect much less on infrastructure spending, border security and entitlement reform/destruction.  In the end, I expect this President and Congress to be able to enact plans which benefit the wealthy and businesses, while punishing the poor and protecting the elderly from budgetary pain.  Pretty much, Republican business as usual.  Don't expect any of these policies to benefit the rural and Rust Belt voters mentioned above.