The Trump Tax Cuts In One Chart 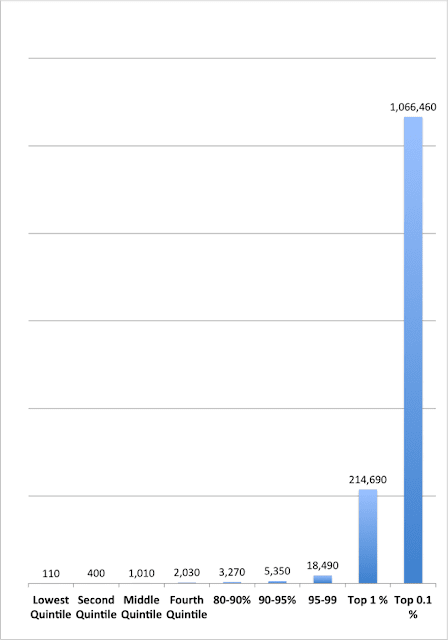 Take a wild guess which column Donald Trump would be The whole, tax break for pass-through income is ridiculous.  Pass-through entities were set up to avoid corporate income taxes.  Now they get treated at the state level in several cases, and in this proposal at the federal level, as somehow better than wage income, which is stupid.  Why should I as a farmer and a member in a farm partnership pay less in taxes on that income than I do for schlepping away at my town job working for The Man?  What if I became a contractor for the company I work in town for, and get paid through a pass-through entity.  This example of how that works is a doozy:


Take a real world example. The state of Kansas does not tax pass-through income, and its highest-paid public employee, Bill Self, the coach of the University of Kansas basketball team, is paid $4.8 million per year through an LLC. Under current federal law, a typical head of household earning $4.8 million might have to give more than a third of his income, or about $1.8 million, to the IRS. Under Trump's plan, somebody like Bill Self could save about $1 million in taxes by setting up a pass-through business, thus paying the same marginal rate as a household making about $50,000.

The highest-paid public employee in the state has his salary paid to an LLC, and thus he pays zero dollars in state income tax.  Brilliant, Sam Brownback, brilliant.  It just blows me away that so many people who are struggling to get by are more than happy to support a billionaire who is going to massively cut his own taxes while destroying the federal budget.  And those same struggling people will get negative returns once budget cuts to stem massive deficits are factored in.

Email ThisBlogThis!Share to TwitterShare to FacebookShare to Pinterest
Labels: Bad Ideas, Crooks and Liars, Don't Drink the Tea, Idiots, Jerks, People Don't Understand Numbers, the crossroads of politics and stupidity, The rich get richer, We Have a Revenue Problem 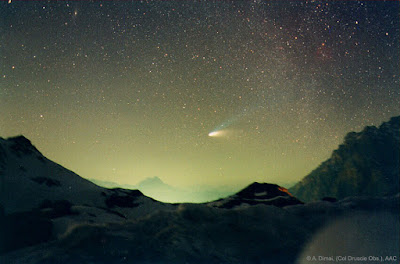 Comet Hale-Bopp Over Val Parola Pass
Image Credit & Copyright: A. Dimai, (Col Druscie Obs.), AAC
Explanation: Comet Hale-Bopp, the Great Comet of 1997, became much brighter than any surrounding stars. It was seen even over bright city lights. Away from city lights, however, it put on quite a spectacular show. Here Comet Hale-Bopp was photographed above Val Parola Pass in the Dolomite mountains surrounding Cortina d'Ampezzo, Italy. Comet Hale-Bopp's blue ion tail, consisting of ions from the comet's nucleus, is pushed out by the solar wind. The white dust tail is composed of larger particles of dust from the nucleus driven by the pressure of sunlight, that orbit behind the comet. Comet Hale-Bopp (C/1995 O1) remained visible to the unaided eye for 18 months -- longer than any other comet in recorded history. This year marks the 20th anniversary of Comet Hale-Bopp's last trip to the inner Solar System. The large comet is next expected to return around the year 4385.

The dark legacy of Hale-Bopp - Heaven's Gate. What a fucked-up mess.
Posted by A Farmer at 10:54 PM 0 comments