I would say this may be one of the biggest upsets in Olympic history:


About a week ago U.S. men's curling team was dead on the ice sheet. A 5-8 loss to Norway in round robin play left the USA with a 2-4 record and three basically must-win matches to go. U.S. skip John Shuster, thinking he had authored yet another Olympic implosion, walked with his family through the Olympic Park while his wife tried to convince him not to give up.
Eventually he sat down in the grass, looked around him and thought, "This is silly. This is the Olympics. I feel like I'm getting my heart broken by this sport and it's just silly." He says he went to bed that night and woke up the next morning and saw the story of U.S. speed skater Dan Jansen, who endured years of shock defeats in the Olympics only to win the final Olympic race of his career.
From then on, Shuster and his team ("Team Reject" as Shuster jokingly called them, referencing their exclusion from USA Curling's High Performance Program after a disappointing showing at Sochi) of Tyler George, Matt Hamilton and John Landsteiner won five straight, culminating in today's shock victory over top-ranked Sweden to give the USA its second ever medal in curling, its first since earning bronze at the 2006 Turin games, and its first ever gold medal in the sport.
A large and loud U.S. contingent gave the arena a home game feel.

So the U.S. won gold in womens hockey and mens curling, and the Canadians didn't.  That has to to be a bitter pill to swallow north of the 49th parallel.
Posted by A Farmer at 8:55 AM 0 comments

Email ThisBlogThis!Share to TwitterShare to FacebookShare to Pinterest
Labels: Minor sports, Other Parts of North America, Strange But True, You Can't Make This Shit Up

The Physics of Curling

The New Yorker explains that physicists aren't really sure why curling stones curl in the way they do.  There are multiple theories:


In June, 2013, Nyberg and his colleagues made that argument in an equation-laden paper in the journal Tribology Letters (“tribology” being the fancy word for “friction science”). Not long before, in the journal Wear, they had proposed a model of their own, which became known as scratch-guiding theory. Using images from an electron microscope, the researchers showed that, as a curling stone slides along, it leaves fine scratches on the ice in the direction of rotation. The scratches are laid down by the front edge of the running band, but when the back edge encounters them it has a tendency to follow them, causing the stone to curl in the direction of rotation. In follow-up experiments, Nyberg’s group found that, by scratching the ice themselves in various ways, they could alter the trajectory of sliding stones, even ones that weren’t rotating. In one setup, they created a lane in which the ice was scratched in one direction and then, farther on, in the other direction. Then they slid a stone down the lane and watched as it curled, first one way and then the other.

“All of this added up to a mechanism that we felt was reasonable,” Nyberg said. He feels further vindicated by a controversy that broke out a couple of years ago: curlers were using new brooms that scratched the ice rather than merely warming it, enabling them to control the curl like never before. The “Frankenbrooms” have since been banned by the World Curling Federation. “I don’t think they’d read our papers, though,” Nyberg said.
One person who did read Nyberg’s papers was Shegelski, and in January, 2016, he wrote a comment piece in Tribology Letters that called the dismissal of asymmetrical-friction models “inappropriate.” Nyberg and his colleagues soon replied, reiterating their earlier points. When I spoke with Shegelski, he noted that, while scratch-guiding theory is intriguing, the theorists haven’t attempted to demonstrate that the mechanism can generate a metre-wide curl, much less explain why the curl is the same regardless of the rotation rate. “The fact is, in a theory, you need to have quantitative results, and there aren’t any,” he said.
Recently, Shegelski teamed up with Edward Lozowski, a physicist and atmospheric scientist at the University of Alberta, to reconsider the curling conundrum. Some years earlier, Lozowski had published papers on the science of bobsledding and speed skating. “Ed is just a wizard at the physics of ice,” Shegelski told me. Together, the two men developed an improved explanation, which they unveiled in the latest issue of Cold Regions Science and Technology. They call it the pivot-slide model. Lozowski, whom I spoke to over Skype, explained it to me by holding up a hair comb and running his finger slowly across the teeth. Notice, he said, that his fingertip adheres to each tooth long enough to bend it, until the elastic force becomes large enough that the tooth breaks free and snaps back into place—that’s stick-slip friction. The same force will cause a circular saw, when it binds, to jump up and try to pivot around the obstacle. That’s what’s happening with a curling stone, he said.
“Every time the running band encounters a pebble, it catches on it,” Lozowski explained. “And, because ice is elastic, the pebble is deflected, then snaps back, and the rock moves on, pivoting during the deflection.” The pebbles and the pivots are small but they are many, and Lozowski and Shegelski calculated that the net result is enough to curl the stone by a metre. They emphasized that there is still a lot of research to be done—making models of the curling ice, quantifying the number of pebbles per unit area. “It could be all wrong,” Lozowski said. “But whether it’s right or not, at least it’s testable.” Nyberg, for one, is unpersuaded. “To be honest, I don’t really understand what they’re getting at,” he said.

That's a lot of complex theory about sliding rocks on ice, but they are pretty fancy rocks, and it isn't just your average ice, so I guess that part of it makes sense to me.  Not much of the rest does.  I would probably just stick to drinking beer and sliding rocks and saying, wow, look how much that curved.
Posted by A Farmer at 6:34 AM 0 comments

Email ThisBlogThis!Share to TwitterShare to FacebookShare to Pinterest
Labels: Minor sports, Other Parts of North America, Science and stuff, Things I Don't Understand, You Can't Make This Shit Up

Look at this, two links posts in less than a week:

Canada In Crisis.  Its Curling Teams Are In Trouble - Wall Street Journal

Doc: We're all better than this racist crap going on at our area high schools - Cincinnati Enquirer.  Racists on Cincinnati's west side? I'm SHOCKED.

How Japan is preparing for the great flood – New Statesman

Besides, I’ll Be Dead – London Review of Books

Could Brexit leave us in a French Revolution scenario of having no bread to feed ourselves? – Irish Independent

A University of, by and for the People - Sarah Vowell.  Second to abolition, land grant colleges are the finest work the Republican Party ever undertook.  The Montana tax levy vote will be one to watch.

Chart: The Population Rank of Every U.S. State Over 100 Years - Visual Capitalist 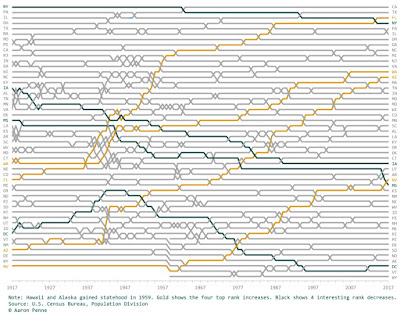