An Aerial Perspective of Nordland

An Aerial Perspective of Nordland from Michael Fletcher on Vimeo. 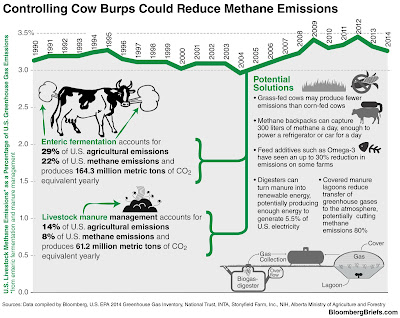 Isolating the impact of direct livestock emissions versus indirect emissions such as fertilizer, crop production, and transport for animal feed is also a challenge, companies and investors say. "The issue for agriculture is identifying the actors and creating levers for change,” Cynthia Simon, senior manager of investor initiatives at CDP, a not-for profit focused on corporate carbon and water measurement, said in an e-mail.

Some big producers are banding together to try to tackle the issue. The U.S. Roundtable for Sustainable Beef, which includes companies such as McDonald's Corp., Wal-Mart Stores Inc., Tyson Foods Inc., JBS USA Holdings Inc. and Cargill, launched in 2015 with the aim of finding better ways to measure the environmental impact of cattle. Greenhouse gas emissions is one of its six "high priority" indicators for sustainability, but “it is a challenge to align the entire value chain,” to get emissions measurements, said John Butler, chair of the roundtable, in an interview.
Some companies are also taking matters into their own hands, getting creative when it comes to cutting emissions from their herds. Cargill, for example, uses domed lagoons to capture some of the methane released from biodegrading cow manure. Yogurt maker Danone found through its research that adding Omega-3 fatty acids to a cow’s diet — largely through infused flax seed — can reduce methane emissions from cows by up to 30 percent. Further research, however, found that while the flax additive reduced methane, it also reduced milk production, pushing Danone to focus on other ways to cut farm emissions.
"We’re really actively engaged in supporting research in this area," said Britt Lundgren, Director of Organic and Sustainable Agriculture at Danone-owned Stonyfield Farm Inc.

The article also has a picture of a cow donning a methane collection system in a research project in Argentina.  Why do I get the feeling that that picture will appear in some conservative fundraising letter claiming EPA is requiring farmers to equip their cows with these in California?  Anyway, this issue is down the list of concerns for farmers below overuse of antibiotics and resistance to GMO traits in corn and soybeans, but it still should be on the list.  Concerns about greenhouse emissions will eventually turn to contributions by livestock.
Posted by A Farmer at 8:27 PM 0 comments