Digging Up a Nuclear Bomb

More about the Goldsboro Incident here.
Posted by A Farmer at 2:26 PM 0 comments

Email ThisBlogThis!Share to TwitterShare to FacebookShare to Pinterest
Labels: Bad Ideas, Strange But True, US history, You Can't Make This Shit Up

Interesting stories from the last week:

Don’t Worry, MLB — Hitters Are Killing The Shift On Their Own – FiveThirtyEight

In Rural America, There Are Few People Left to Drive the Ambulances - The New Yorker

A Farmer Found a Trojan Horse Inside an Insurance Contract.  Now He Might Bring Down the Canadian Insurance Industry. - Institutional Investor.  Bwahahahahaha

Welcome to Tax Breaklandia - Bloomberg.  This is going to blow a large hole in the U.S. Treasury. 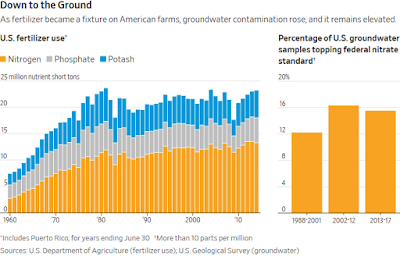 Email ThisBlogThis!Share to TwitterShare to FacebookShare to Pinterest
Labels: Beer and other gifts from God, Civil society, Crooks and Liars, Food for Thought, News in the Midwest, the National pastime, The rich get richer, US history

CovCath, Twitter, the Trump Presidency and a Nation Unhinged

Saturday afternoon and evening, I got sucked into the apparently fake controversy in which a kid in a MAGA hat appears to be standing in the path of a Native American protester from the Indigenous Peoples march, while his classmates surround them laughing and jeering.  I watched the video, and my initial reaction was, "man, these MAGA folks are assholes."  Then I saw this video from another angle.

My reaction to the second video perspective was a little different.  It hit a little closer to home.  First off, seeing the guy in the Covington Catholic  sweatshirt made me realize these kids were from the local area, and also Catholic.  Secondly, I saw a kid in the background wearing a Notre Dame cap.  That is my alma mater.  Finally, assuming these kids were ultra-conservative Trump supporters spouting racist crap about foreigners (build that Wall), I felt like I was looking at myself in high school.

I tried to write a post late Saturday night entitled, "In Partial Defense of the Worst Kid In America."  The gist of it was going to be that, I, like that kid, was once a super-conservative supporter of the GOP who held some pretty racist beliefs, so there is the real possibility that the kid will grow up to hold totally different views as an adult.  That pretty well describes my arc from high school kid who listened to WLW around the clock and believed the United States was being taken over by the Japanese, to an adult who finds conservative politics to be generally racist arguments that Democrats and minorities are moochers, and that social welfare programs should be slashed so that tax cuts can be given to the wealthy.  I gave up on it because it was late, I was tired and half-drunk, and I wasn't sure how in-depth I wanted to be about a few of the things I'm most ashamed of from my youth.

Come Sunday, when additional video came out, and it now appears that the supposed showdown was staged by the handful of Native American protesters, I ended up feeling bad that I was quick to assume the kids were being assholes, and that the furor raised by the Twitter mob could end up benefiting Trump's bid for re-election.  It is a pretty good example of how easily we can be swayed to believe the worst in our fellow citizens who happen to be in the opposite political camp, and how we can dramatically overreact. Even on Saturday afternoon and evening, when I assumed the kids were being assholes, I felt bad for the school administrators who were caught up in this political firestorm.  They were suddenly being overwhelmed with terrible publicity and national media attention because a group of kids were involved in a public incident, and the school was being overwhelmed with vitriol.  The administrators had to try to get out in front of the news even though they didn't really have any idea what had happened.  After the additional footage came out, the case for feeling bad for the administrators and students is overwhelming.

I am absolutely no fan of President Trump, and I hope he suffers a landslide defeat in two years.  I equate MAGA hats with racism.  When I saw stories that the additional video showed the kids to be innocent and the Native American protester sparked the incident, I didn't want to believe it.  And yet, at the height of the Twitter freakout, when I thought the kids were the assholes in the situation, I was feeling badly for the school administrators and could look at the kid in the center of the incident and empathize with him.  If I was feeling that then, you can imagine how Trump supporters will see all of this.  It is a massive own-goal for everyone who wants to see Trump defeated.

Yesterday was the second anniversary of Trump's inauguration.  We have two more years of this pressure-cooker political environment which will be played out in a brutal election campaign.  The events of this weekend will most likely not be the most divisive we'll see.  It is going to be miserable, and I'm afraid the wounds to our civil society are going to be even deeper than I believed before.  Everyone, myself included, needs to take a deep breath and try to back down the rhetoric.