Better Hang This Up So We Can Remember the Good Times

Email ThisBlogThis!Share to TwitterShare to FacebookShare to Pinterest
Labels: Ag economy, Fools and Their Money (Temporarily), News in the Midwest

My Grandma, My Grandpa and Winston Churchill

Churchill got a scrip requiring him to drink at least 8 doubles a day "for convalescence" https://t.co/xPt7B1zb59 pic.twitter.com/GJUvkYKONC

Email ThisBlogThis!Share to TwitterShare to FacebookShare to Pinterest
Labels: Beer and other gifts from God, Do as I say not as I do, You Can't Make This Shit Up 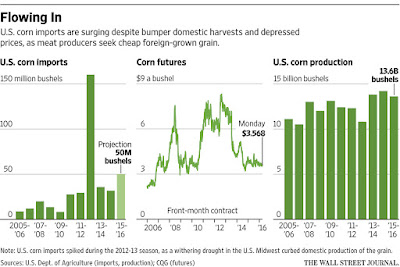 Even as record harvests have left the U.S. awash in corn, imports of the crucial animal feed are surging. It is happening because moves in currencies, ocean shipping fees and railroad rates have combined to produce an unexpected result: Bringing in corn from places like Brazil and Argentina can be cheaper for poultry and livestock producers in the U.S. Southeast than buying it from the Midwest....
Imports remain a very small part of the market in the U.S., the world’s largest exporter of corn. Still, the notable surge is a telling indicator of how the commodity bust and strong dollar have distorted prevailing patterns of commerce.
The U.S. Agriculture Department projected Tuesday that buyers would import 50 million bushels of the grain this season, up 56% from last season, even as U.S. bins swell with grain. U.S. buyers haven’t imported that much corn since 2012-2013, when a severe drought slashed domestic production, sending futures prices to all-time highs....
The rise in imports follows a multiyear boom in American agriculture during which Midwestern farmers ramped up production to satisfy burgeoning demand from a growing biofuels industry at home and increasingly wealthy populations in emerging markets.
The rest of the world followed suit. Brazil, the second-largest corn exporter behind the U.S., is on track this season to harvest its second-largest corn crop on record, as is Argentina. Exporters in Argentina were offering corn at a roughly 6% discount to U.S. supplies for a period earlier this year, and Brazilian corn was cheaper than its U.S. counterpart for much of last year....
In April, it could cost about $0.80 to $1.50 a bushel to ship corn from west to east in the U.S. by rail, while per-bushel costs to ship corn from South America to the U.S. recently have ranged from about $0.35 to $0.50.

Things are going to get really, really ugly in the next few years.  We had 25 years of low prices after the last grain price boom in the Seventies.  I wouldn't be surprised if we had another very long agricultural depression.  With Brazil and Argentina growing huge crops and needing to bring in as many dollars as possible, I think we will have a really hard time getting back to the windfall prices we got used to from 2007 until the last year and a half.  A bumper crop bailed us out last year, but any more large harvests are just going to further depress prices.  I would strongly suggest avoiding agricultural land as an investment vehicle.
Posted by A Farmer at 11:01 PM 0 comments

Haunted by Living in the Middle of Nowhere


The acreage is quiet and remote: a farm, a pasture, an old orchard, two barns, some hog shacks and a two-story house. It’s the kind of place you move to if you want to get away from it all. The nearest neighbor is a mile away, and the closest big town has just 13,000 people. It is real, rural America; in fact, it’s a two-hour drive from the exact geographical center of the United States.
But instead of being a place of respite, the people who live on Joyce Taylor’s land find themselves in a technological horror story.
For the last decade, Taylor and her renters have been visited by all kinds of mysterious trouble. They’ve been accused of being identity thieves, spammers, scammers and fraudsters. They’ve gotten visited by FBI agents, federal marshals, IRS collectors, ambulances searching for suicidal veterans, and police officers searching for runaway children. They’ve found people scrounging around in their barn. The renters have been doxxed, their names and addresses posted on the internet by vigilantes. Once, someone left a broken toilet in the driveway as a strange, indefinite threat....
At its most precise, an IP address can be mapped to a house. (You can try to map your own IP address here.) At its least precise, it can be mapped only to a country. In order to deal with that imprecision, MaxMind decided to set default locations at the city, state and country level for when it knows only roughly where the IP address lives. If it knows only that an IP address is somewhere in the U.S., and can’t figure out anything more about where it is, it will point to the center of the country.
As any geography nerd knows, the precise center of the United States is in northern Kansas, near the Nebraska border. Technically, the latitudinal and longitudinal coordinates of the center spot are 39°50′N 98°35′W. In digital maps, that number is an ugly one: 39.8333333,-98.585522. So back in 2002, when MaxMind was first choosing the default point on its digital map for the center of the U.S., it decided to clean up the measurements and go with a simpler, nearby latitude and longitude: 38°N 97°W or 38.0000,-97.0000.
As a result, for the last 14 years, every time MaxMind’s database has been queried about the location of an IP address in the United States it can’t identify, it has spit out the default location of a spot two hours away from the geographic center of the country. This happens a lot: 5,000 companies rely on MaxMind’s IP mapping information, and in all, there are now over 600 million IP addresses associated with that default coordinate. If any of those IP addresses are used by a scammer, or a computer thief, or a suicidal person contacting a help line, MaxMind’s database places them at the same spot: 38.0000,-97.0000.
Which happens to be in the front yard of Joyce Taylor’s house.

That is just absolutely terrible, terrible luck.  Why not 40.000, 98.5000?  Anyway, it would probably help if people guessed on their own that that spammer doesn't live in the middle of freaking Kansas.
Posted by A Farmer at 10:29 PM 0 comments

Email ThisBlogThis!Share to TwitterShare to FacebookShare to Pinterest
Labels: News in the Midwest, Oops, Strange But True, You Can't Make This Shit Up

Wait, Who Are We Talking About?


After losing an embarrassing six straight primaries, including the critical states of Florida and Illinois, the upstart presidential candidate came under tremendous pressure from the party establishment to get out of the race. Party insiders called his proposals "simplistic," pundits fretted he was too old and even a key aide admitted one goal was to show "we were not the candidate of kooks."

But the challenger insisted that he'd tapped into real anger among the ignored rank-and-file voters who wanted him to fight all the way to the party convention in July.
"The issue I sense," he told an interviewer, "is that the Empire is in decline. The establishment doesn't want to raise it." He used new technologies to reach small-dollar donors, and his allies noted that he'd "sharpened" his rival's message for a general election.
And so, in the spring of 1976, Ronald Reagan pressed on with his underdog quest to wrest the GOP nomination from the incumbent (albeit unelected) President Gerald Ford -- following a track that should look very familiar to the voters and pundits watching the out-of-left-field 2016 Democratic primary challenge by Vermont Sen. Bernie Sanders.

The whole article is worth reading.  It is interesting to read how Reagan attacked Gerald Ford on detente with the Soviet Union, considering how Reagan went on to negotiate with Gorbachev after he was in the Oval Office.
Posted by A Farmer at 11:34 PM 0 comments

Email ThisBlogThis!Share to TwitterShare to FacebookShare to Pinterest
Labels: National politics, Strange But True, US history

Explanation: Early spring in the northern hemisphere is good season for aurora hunters. Near an equinox Earth's magnetic field is oriented to favor interactions with the solar wind that trigger the alluring glow of the northern lights. On March 28/29 the skies over Kaunispää Hill, Lapland, Finland did not disappoint. That night's expansive auroral curtains are captured in this striking panoramic view that covers a full 360 degrees. Local skywatchers were mesmerized by bright displays lasted throughout the dark hours, shimmering with colors easily visible to the naked eye
Posted by A Farmer at 9:56 PM 0 comments

A Chart for Sunday

From one of my favorite Vox map features: 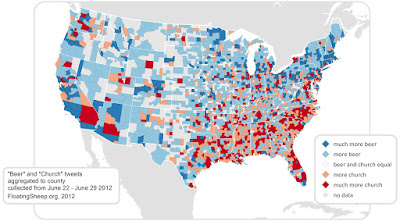 Email ThisBlogThis!Share to TwitterShare to FacebookShare to Pinterest
Labels: Beer and other gifts from God, News in the Midwest, the Church

Hopefully your Sunday afternoon was less of a letdown than Jordan Speith's.  Here are some stories I thought were interesting:

How Canada Was Shut Out of the NHL Playoffs - VICE Sports


Big Seed: How The Industry Turned From Small-Town Firms To Global Giants  - The Salt

Agriculture on the brink - Truthout

The sugar conspiracy - The Guardian

How Catholic Are We? and Sister Blandina and the Road to Sainthood - Cincinnati Magazine.  A Catholic twofer.

City of Water - The New Yorker.  From 2003, but gives good information on the New York water system, and the Sandhogs who built it.

Something Uneasy in the Los Angeles Air - Curbed Los Angeles.  On the history and effect of the Santa Ana winds.

Why is the U.S. unwilling to pay for good public transportation? - The Conversation 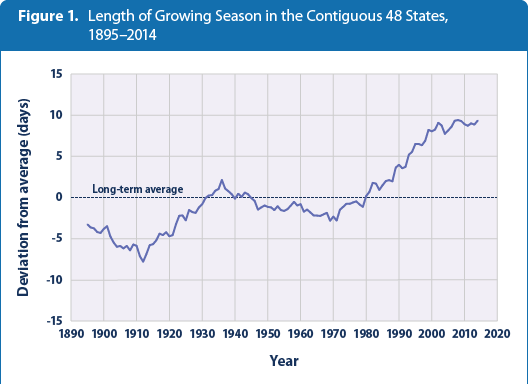 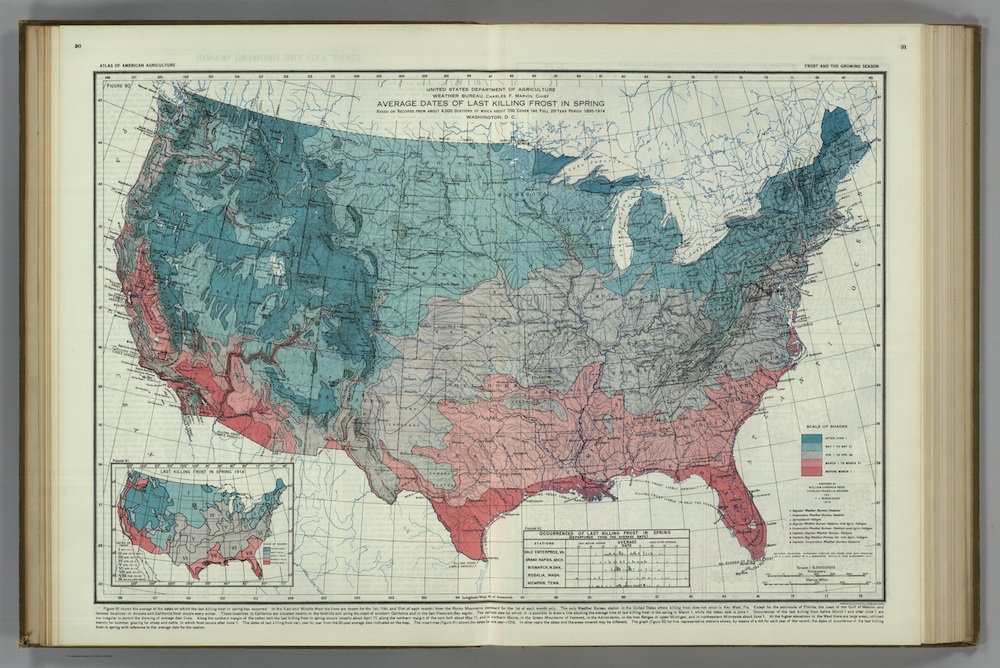 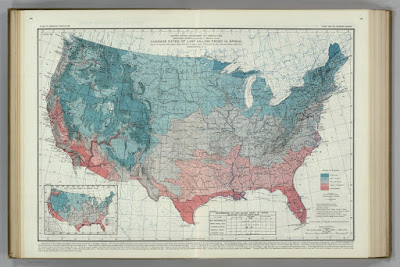