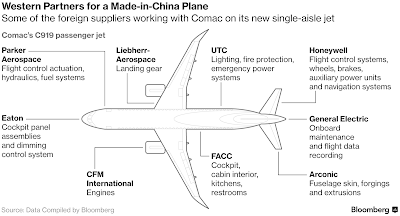 China is making its boldest attempt yet to break the stranglehold that Airbus SE and Boeing Co. have on the market for big commercial airliners. After years of delays, the nation’s first modern large jet is expected to make its maiden flight....
The 158-174 seat C919 is made by state-owned Commercial Aircraft Corp. of China Ltd. and follows Comac’s development of a smaller, regional jet, the ARJ21, that was flown by a Chinese airline for the first time last year. The C919 brings Comac to the table in one of the most lucrative sectors of commercial aviation, competing head-to-head with Boeing’s ubiquitous 737 and Airbus’s A320....
The Chinese jet demonstrates the extent globalization has taken over the manufacture of major engineering products. Just as the jet relies on systems from firms based around the world, many of those systems are built with components that originated in China.
The C919’s engines for example are made by CFM. CFM’s parents, GE and French manufacturer Safran Aircraft Engines, in turn buy more than $500 million of Chinese-made parts a year for the company’s single-aisle jet engine series, the company said.

Hmmm....looks like a who's who of my stock portfolio.  I wonder how long it will be before all that technology is pirated by mainland companies.  I'm guessing not very long.
Posted by A Farmer at 9:25 PM 0 comments

Email ThisBlogThis!Share to TwitterShare to FacebookShare to Pinterest
Labels: Didn't Know That, Engineering and Infrastructure

Cincinnati May Have A New Mayor

If it is Yvette Simpson, she will bring a unique biography to the job.
Posted by A Farmer at 10:44 PM 0 comments

Email ThisBlogThis!Share to TwitterShare to FacebookShare to Pinterest
Labels: Civil society, News in the Midwest

Every Town For Itself In Climate Change Era


About 40 percent of levees along the Mississippi River in the Army Corps of Engineers district north of St. Louis are built higher than their authorized heights, according to the agency’s own findings.
The Corps’ Rock Island District, which covers an area beginning about 60 miles upstream from St. Louis, reports that about 80 out of 202 miles of levee systems it surveyed are improperly high, based on data yet to be publicly released.
“Some of those were between 2 and 4 feet above their authorized elevation,” said Scott Whitney, the Corps’ Rock Island District flood risk manager and chief of project management. “The revelation is out there that levee districts throughout this region have taken, in some cases, some pretty extreme measures to protect themselves.”
That protection, he notes, has come “at the cost of others,” with the added levee height leaving other areas more vulnerable to redirected floodwater. Whitney said the district is still developing a hydraulic model to understand how far-reaching the levees’ combined impact on flooding has been, including whether the St. Louis area has been affected....
Complicating matters further, stronger flood protection is increasingly coveted, with an unusual number of major floods taking place in recent years — a symptom consistent with more erratic trends in precipitation predicted by climate change.
“We’re in an extremely wet period,” said Whitney, noting that several of the region’s top flooding events on record have occurred in the last decade. “We’ve had a number of those in the last several years. People think, ‘My God, I’ve had three 100-year flood events in the last five years.’”

Expect more frequent floods, more damaging winds, more violent tornadoes and hurricanes, and other dramatic weather events in the future.  And expect communities that can to try to protect themselves, even as it hurts their neighbors.  Things are going to be difficult in the future.
Posted by A Farmer at 10:03 PM 0 comments

Email ThisBlogThis!Share to TwitterShare to FacebookShare to Pinterest
Labels: Bad Ideas, Civil society, Do as I say not as I do, Engineering and Infrastructure, Global warming, Mother Nature that Bitch, News in the Midwest

Chart of the Day: Corn Products 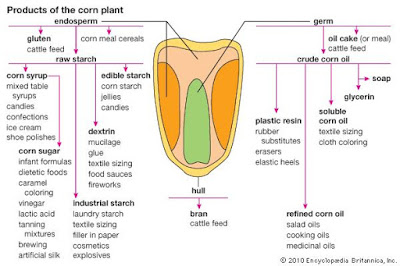 Lots of interesting historical corn facts there, too.  Here are a few:

Email ThisBlogThis!Share to TwitterShare to FacebookShare to Pinterest
Labels: Didn't Know That, Food for Thought, News in the Midwest, Strange But True, US history
Newer Posts Older Posts Home
Subscribe to: Posts (Atom)