Email ThisBlogThis!Share to TwitterShare to FacebookShare to Pinterest
Labels: Fun, Strange But True, the National pastime

With most Americans enjoying a three-day weekend, here are some interesting stories to check out:

The Night the Ali-Liston Fight Came to Lewiston - New York Times.  It amazes me that a heavyweight title fight ended up being staged at an arena built by a Catholic parish to host high school hockey.

Doc: Justice for Oscar Robertson, 60 Years Removed - Cincinnati Enquirer.  Just a small reminder what life was like back in the Fifties.

What do we need to fight climate change? More worms. - Grist

Will Art Save Our Descendents from Radioactive Waste? - JSTOR Daily

In the Beginning - Aeon

Why Children Are Abandoning Baseball - Wall Street Journal.  Not just baseball (although most dramatically), but all organized sports.  Just a guess: adults taking the fun out of it. 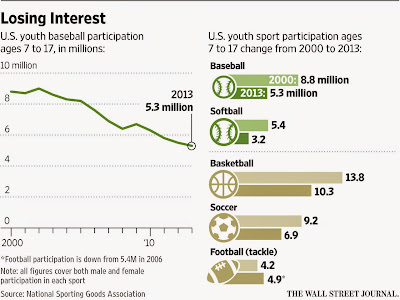 Email ThisBlogThis!Share to TwitterShare to FacebookShare to Pinterest
Labels: Basketball, Fools and Their Money (Temporarily), the National pastime, the Sweet Science, US history, War Criminals and the Security State 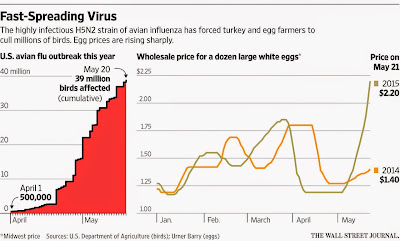 
The financial toll of the worst U.S. bird-flu outbreak in history is soaring, forcing some poultry companies to suspend operations and boosting prices for eggs and turkeys as supplies tighten.
Egg companies—the sector hit hardest by the virus—and turkey producers are spending millions of dollars to try to contain the disease. With eggs in particular, the problem is greatly complicated by the way the American industry is concentrated in the hands of relatively few producers...
Avian influenza has resulted in the deaths or extermination of at least 38.9 million birds, more than double the previous major U.S. outbreak in the 1980s. Of that total, more than 32 million are egg-laying hens, accounting for about 10% of the U.S. egg-laying flock....
The outbreak has had an especially pronounced impact because the industry is highly concentrated, with farms on average containing around 1.5 million birds, according to the trade group’s Mr. Gregory. When the virus is confirmed in one hen house, birds in all of the other nearby houses typically have to be killed to prevent further spread.
The U.S. has fewer than 200 commercial-egg companies, down from about 10,000 in the 1970s, Mr. Gregory said.
“One of the problems we’ve had through this outbreak stems from the massive population of chickens on these farms today,” said Marcus Rust, chief executive of Indiana-based Rose Acre Farms, one of the largest U.S. egg producers. “Our customer base is demanding the lowest cost possible and that causes us to put six million chickens on one farm. When something like this happens, just that one farm going out [of production] can cause the entire market for eggs to go up five cents a dozen.”
Mr. Rust said 8% of Rose Acres’ hens have been wiped out because the virus has hit one of its Iowa facilities, leading the company to clear nearby houses too.

Concentrated production is the cheapest and most efficient method, until it isn't.  Not only is production concentrated, but so is the infrastructure that supports it.  Most areas of the Corn Belt are bereft of livestock, but certain areas have way more than is good or sensible.  Much like with the droughts across the continent, this outbreak, and last year's PEDV problem are rather unsettling.  They seem to me to be making the case that we must rethink the operations of our food system to spread risks, reduce fragility and develop more robust and disbursed production strategies.  Should vast majorities of many fruits and vegetables be grown in the California desert?  Should 10 to 20 percent of egg production be concentrated in a dozen or so counties?  Should the vast majority of our most productive rain-fed agricultural land be used to produce two crops, more than a third of which is turned into motor fuel?  I think antibiotic and pesticide resistance, climate change, peak oil production, economics and other factors will threaten and eventually destroy the massive consolidation and specialization which has completely altered agriculture the last 50 years. And it won't just be agriculture which is impacted.
Posted by A Farmer at 10:44 PM 0 comments

Email ThisBlogThis!Share to TwitterShare to FacebookShare to Pinterest
Labels: Ag economy, Civil society, Food for Thought, News in the Midwest


More than anywhere else in the world, Canada’s Prairie provinces yield canola seeds that are crushed to make vegetable oil used by McDonald’s, KFC, Taco Bell and Frito-Lay. This year, a dry spell has left the soil more like concrete, making it tougher for farmers to plant and threatening to cut production for a second straight year.
“We’ve just been missing every rain,” grower Eric McPeek, 30, said by telephone from his 4,100-acre farm in Coronach, Saskatchewan. McPeek sowed canola, durum wheat, chickpeas and lentils in ground he said was the hardest since 2010.
It’s been a rough ride for canola in Canada, where this year’s lack of moisture followed a spring-planting season in 2014 that was delayed by too much rain. Prices have jumped 18 percent from a four-year low in September. Dry conditions also make it harder to plant wheat, as weather disruptions in North America sparked a rally this month in prices that had been mired in a bear market because of record global inventories. Canada is the world’s largest wheat exporter, after the U.S.
“All of the crops are having trouble now,” Ken Kultgen, a farmer and the mayor of Foremost, Alberta, said in a telephone interview on May 14. Some of the wheat and barley seeded early in the province’s southwest haven’t germinated because of the dry weather, while his land hasn’t had rain since early April, and the soil is too “hard and crusted” to seed 320 acres of canola, he said.
Areas of Alberta and Saskatchewan, Canada’s biggest crop growers, got less than 40 percent of normal rain this growing season, according to the government agriculture agency. Last year, planting was delayed in the Prairie provinces by too much rain, and was partly to blame for a 22 percent drop in wheat output and the 13 percent slide in the canola harvest.
Most of southwest Saskatchewan and southern and central Alberta have been dry for the past several weeks, said Andrew Owen, a meteorologist at Overland Park, Kansas-based World Weather Inc. Below-normal precipitation is expected for much of the growing season in the Canadian Prairies, and crop quality and yields may decline, he said. Most canola and wheat seeds need to be sown by early June to allow enough time to mature before the harvest in mid-October.

Weather-related trouble isn't just limited to California.  Or Washington.  It's somewhat disconcerting that the weather has been so fickle in so many places.
Posted by A Farmer at 10:03 PM 0 comments

Email ThisBlogThis!Share to TwitterShare to FacebookShare to Pinterest
Labels: Ag economy, Food for Thought, Mother Nature that Bitch, Other Parts of North America

I'm Not Dead Yet

Yeah, I haven't posted anything for a few days, but I'm still among the living. We did finish planting crops last night, so I've got that going for me. More posts to come.
Posted by A Farmer at 9:49 PM 0 comments 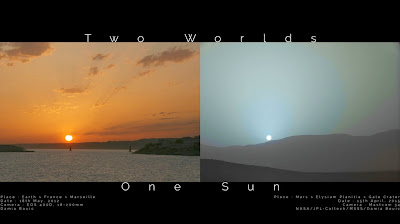 Two Worlds, One Sun
Left Image Credit & Copyright: Damia Bouic;
Right Image Credit: NASA, JPL-Caltech, MSSS; Digital processing: Damia Bouic
Explanation: How different does sunset appear from Mars than from Earth? For comparison, two images of our common star were taken at sunset, one from Earth and one from Mars. These images were scaled to have same angular width and featured here side-by-side. A quick inspection will reveal that the Sun appears slightly smaller from Mars than from Earth. This makes sense since Mars is 50% further from the Sun than Earth. More striking, perhaps, is that the Martian sunset is noticeably bluer near the Sun than the typically orange colors near the setting Sun from Earth. The reason for the blue hues from Mars is not fully understood, but thought to be related to forward scattering properties of Martian dust. The terrestrial sunset was taken in 2012 March from Marseille, France, while the Martian sunset was captured last month by NASA's robotic Curiosity rover from Gale crater on Mars.
Posted by A Farmer at 9:26 PM 0 comments