Our Changing Climate from Jack Harries on Vimeo.

I hear there's a game tomorrow, but since it doesn't start until late, you'll have time to read some of these stories:

Farm Subsidies Persist and Grow, Despite Talk of Reform - The Salt

What Happens To Farmers' Interests After Everybody Packs Up and Leaves Iowa? - Charles Pierce

Cover Crops, a Farming Revolution With Deep Roots in the Past - New York Times (h/t the Nurse)

U.S. Security Concerns Could Stand in the Way of ChemChina's Syngenta Bid - Bloomberg.  It would seem like something of an overstep for the U.S. to tell a Swiss company it can't be bought by a Chinese company.

One of Africa's Biggest Dams Is Falling Apart - The New Yorker

Hoosier Hall of Fame: Hoosier Innovations - Indianapolis Monthly.  Yes, I hate Indiana, but there are a few interesting things on this list.  I didn't know Chuck Taylor was from Hoosierland.

What Went Wrong in Flint - FiveThirtyEight

The rise of the Sagebrush Sheriffs - High Country News

To Tell The Truth - Texas Monthly

Should You Literally Pick The Low-Hanging Fruit? - Priceonomics,  This is a favorite term in ITW 80/20.  That and, "screw the little guy." 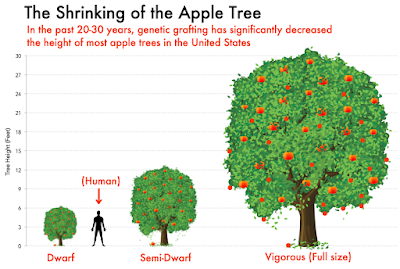 Trail Angel from REI on Vimeo.

U.S. Republican presidential candidate Ted Cruz's victory on Monday in corn-rich Iowa could represent a major blow to the country's controversial biofuels program, reflecting its waning influence over politicians even in the U.S. farm heartland.
Cruz, a conservative senator from Texas and outspoken opponent of the Renewable Fuel Standard, or RFS, upset billionaire businessman Donald Trump in the Iowa caucuses, the first of the state-by-state battles to pick party nominees for the Nov. 8 election.
Cruz won with 28 percent of the vote, compared with 24 percent for Trump, in a victory that included taking Kossuth County, the state's biggest corn-producing county.
The result was a setback for corn farmers in the country's biggest ethanol-producing state, who have lobbied hard to protect the policy from being dismantled after more than a decade.
The program requires the use of ethanol and other biofuels in the nation's fuel supply and is aimed at reducing U.S. dependence on foreign oil, utilizing cleaner, domestic energy sources and boosting rural economies.
Cruz now supports a phase-out of requirements for renewable fuel, rather than the immediate repeal he was pushing for in 2013.
Still, the fact he won Iowa without the backing of the ethanol and corn lobby may raise doubts as to whether candidates still need to garner its support in the long term, potentially removing a big pillar of support for the lobby's agenda.
"The conversation inside of Congress in the morning will change instantly, as Republicans realize they can be against the mandate and still win," said Michael McKenna, a Republican strategist and energy lobbyist, speaking of a Cruz win.


It is interesting that Cruz found his greatest support in rural, agricultural regions of Iowa.  Many of the hardcore Tea Party members, most of whom represent rural districts, have long been opposed to the ethanol mandate.  Eliminating the mandate could be a popular bipartisan issue, uniting these rural opponents with Democrats representing urban districts.

The kicker is that in the era after the Renewable Fuel Standard became law, the farm economy has never been more exposed to the negative impacts of a repeal of the mandate.  The corn carryout is at a record high for that time frame, and Chinese demand has essentially dried up.  Add to it low gasoline prices, and ethanol is overpriced as a fuel, mandate or not.  That takes away any economic argument for continuing the 10% blend.

Assuming that politicians were willing to take out the mandate, corn prices would come under tremendous downward pressure, putting the entire rural economy into recession, or worse.  Land prices would fall, rural banks would close, schools and local governments would struggle, and more people would leave for greener pastures in the cities and suburbs.  Ironically, if the corn belt sees a major drought and grain prices rally significantly while oil prices continue to decline, the economic argument against ethanol becomes much stronger and repeal of the mandate becomes the obvious policy.  No matter whether Big Corn can fight off the anti-ethanol forces in the near-term, the mandate won't live much longer, and that makes me bearish on grain prices in the medium to long-term.
Posted by A Farmer at 9:04 PM 0 comments 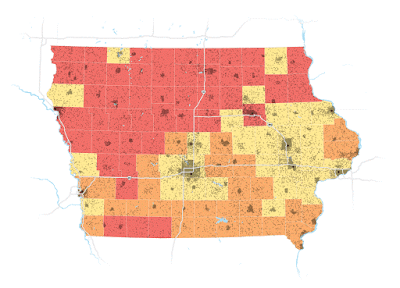 The red are the rural religious conservative areas.  A little bit about a county I've featured a few times here, Sioux County, where farmland sold for $20,000 an acre a few years back:


Sioux County, where evangelical Christians are a higher percentage of the population than anywhere else in the state, is also Iowa’s most Republican. No Democratic presidential candidate has won more than 20% of the popular vote in a general election since Michael Dukakis in 1988. Mr. Cruz will need to run up big margins here if he hopes to topple Mr. Trump.

The Journal notes that the red counties are more religious, with fewer college graduates and lower incomes.  Oddly, that is considered an area of strength for Princeton and Harvard Law graduate Ted Cruz, the candidate married to a Goldman Sachs investment manager.  Sure, Ted's dad is a preacher, but there isn't much rural about old Ted.  Strikingly, Trump also does well with these folks.  I just don't get it.

Email ThisBlogThis!Share to TwitterShare to FacebookShare to Pinterest
Labels: Don't Drink the Tea, News in the Midwest, The Republican Party and other Brainwashing Cults, Things I Don't Understand An Airglow Fan from Lake to Sky
Image Credit & Copyright: Dave Lane; Rollover Annotation: Judy Schmidt
Explanation: Why would the sky look like a giant fan? Airglow. The featured intermittent green glow appeared to rise from a lake through the arch of our Milky Way Galaxy, as captured last summer next to Bryce Canyon in Utah, USA. The unusual pattern was created by atmospheric gravity waves, ripples of alternating air pressure that can grow with height as the air thins, in this case about 90 kilometers up. Unlike auroras powered by collisions with energetic charged particles and seen at high latitudes, airglow is due to chemiluminescence, the production of light in a chemical reaction. More typically seen near the horizon, airglow keeps the night sky from ever being completely dark.
Posted by A Farmer at 8:34 PM 0 comments