The Economist, via Ritholtz: 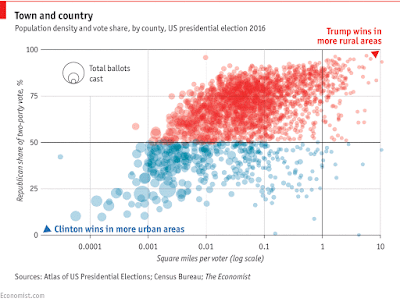 As our map (above) of America’s voting patterns on a county-by-county basis going back to 1952 makes clear, Mr Trump’s gains were concentrated in rural areas across the northern United States. Republicans have long held the edge in America’s wide-open spaces, but never has the gap been this profound: a whopping 80% of voters who have over one square mile (2.6 square km) of land to enjoy to themselves backed Mr Trump. As the scatter plot below demonstrates, as counties become increasingly densely populated, fewer and fewer vote Republican. American politics appear to be realigning along a cleavage between inward-looking countryfolk and urban globalists. Mr Trump hails from the latter group, but his message resounded with the former. A uniquely divisive candidate, he is both perhaps the least likely politician in the country to build bridges across that gap and also the only one who has the capacity to do so.

I don't see Trump uniting the nation.  I honestly think that the appreciation of civil government increases with the number of people one is surrounded by.  Alternatively, based on farmers and business people I know, maybe the more government money you receive, the more you hate government.
Posted by A Farmer at 4:32 PM 0 comments

It's been a while, but I'll try to link to a few of the good stories I've seen recently:

Choke Point of a Nation: The High Cost of an Aging River Lock - New York Times.  More on the Olmstead Lock and Dam project here and here and here.

A Blade Strikes Steel, and the Blast Shocks a Nation's Energy System - Bloomberg

The Road Ahead - American Scientist

The Desert Rock That Feeds The World - The Atlantic

Farmers Are Courting Trump, But They Don't Speak For All Of Rural America - The Salt.  Shorter farmers: where's my Obamaphone free shit.

Carrier Reaches Deal With Trump to Keep About 1,000 U.S. Jobs - Bloomberg.  I can't wait to hear the details about how much this will cost.  What's to keep lots of other companies from threatening to move jobs to Mexico to get their free money, too?  How about Rexnord?

Disgorge the Cash - The New Inquiry.  "Maximizing shareholder return" has done more damage to American workers than anything else.