Happy Repeal Day!  Go knock back a shot of whiskey (maybe not before noon) and check out these stories:

Six-Man Football: How Small Texas Towns Hold on to the Game They Love - Vice Sports

Notes From the Underground: The faux battle for the secret crown of New York - SB Nation

An Interstate Battle for Groundwater - The Atlantic.  No surprise that farmers are in the middle of it.

This Is the Longest Buffalo Has Gone Without Measurable Snow - Bloomberg.  El Nino at work.

Is the 2 degree C world a fantasy? - Nature.  Yup, I think we are screwed.

'If I burn out, I burn out': Meet Taylor Wilson, nuclear boy genius - The Guardian

Rick Dyer's Believe It Or Not! - Texas Monthly.  Bigfoot on tour.

1,052 mass shootings in 1,066 days: this is what America's gun crisis looks like - The Guardian.  Pretty amazing in a horrifying way.

What Would It Take To Turn Blue States Red - FiveThirtyEight

Why the Economic Fates of America's Cities Diverged - The Atlantic.  The deregulation and anti-trust angle is interesting, but tax policy, zoning, geography and a number of other things have shaped it.

Kasich's 'Plan' to Balance Budget Does Not Exist - New York Magazine.  Whodathunkit?  You mean the trickle-down knucklehead that is in charge of my state is innumerate and full of shit? 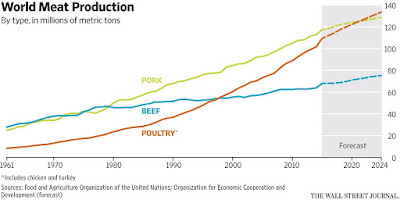 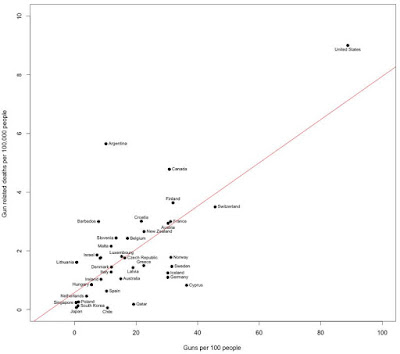 The Harmony of Fall

The Harmony of Fall from Enrique Pacheco on Vimeo.

Let's Not Jump To Conclusions


What moved a man to kill three people and wound nine others at a Planned Parenthood clinic in Colorado has not been disclosed. But the suspect accused of carrying out the shooting spree, Robert Lewis Dear, made remarks about "baby parts" to investigators after his surrender, a law enforcement official told CNN.

Dear, 57, told them he has anti-abortion and anti-government views, but that doesn't mean those opinions were his motive for allegedly shooting up the Colorado Springs clinic on Friday, the official said. It's too early to tell, as investigators are still processing evidence.

Well, Occam's Razor could probably be used to determine what motivated the shooter, but it doesn't appear that Ted Cruz is using it:


Republican presidential candidate Ted Cruz is the latest presidential candidate trying to downplay the role anti-abortion rhetoric may have played in motivating the Planned Parenthood shooting in Colorado Springs Friday afternoon. When a reporter asked him at an Iowa campaign stop Sunday evening about suspect Robert Lewis Dear saying he was motivated by “no more baby parts,” Cruz countered that he’s also been reported to be a “transgendered [sic] leftist activist.”
Cruz explained, “We know that he was a man registered to vote as a woman.” This discrepancy on Dear’s voter registration was first reported by The Gateway Pundit, a self-described “right-of-center news website,” under the claim that he “identifies as [a] woman.” Conservatives have since run with the claim that Dear is transgender.
There is actually no evidence to suggest that he is transgender, nor a “leftist,” nor any kind of activist. In fact, all of the available information suggests he was none of those things....The Times’ profile also identifies him as “generally conservative,” having been raised as a Baptist, but as someone who did not discuss politics much. According to his ex-wife, “he believed wholeheartedly in the Bible” and believed that abortion was wrong. He also distributed pamphlets criticizing President Obama to his neighbors in Colorado. On the voter registration form with the gender discrepancy, his party is listed as “UAF,” meaning unaffliated.

I'll bet against that transgender theory.  I'll also bet against the theory that Ted Cruz isn't a slimy, manipulative charlatan who pretends to be religious.
Posted by A Farmer at 12:59 AM 0 comments 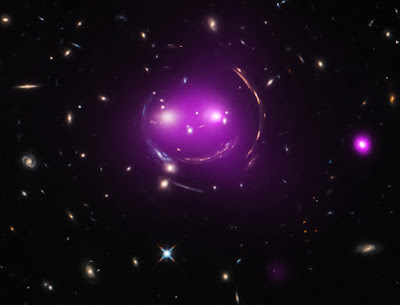 Gravity's Grin
Image Credit: X-ray - NASA / CXC / J. Irwin et al. ; Optical - NASA/STScI
Explanation: Albert Einstein's general theory of relativity, published 100 years ago this month, predicted the phenomenon of gravitational lensing. And that's what gives these distant galaxies such a whimsical appearance, seen through the looking glass of X-ray and optical image data from the Chandra and Hubble space telescopes. Nicknamed the Cheshire Cat galaxy group, the group's two large elliptical galaxies are suggestively framed by arcs. The arcs are optical images of distant background galaxies lensed by the foreground group's total distribution of gravitational mass dominated by dark matter. In fact the two large elliptical "eye" galaxies represent the brightest members of their own galaxy groups which are merging. Their relative collisional speed of nearly 1,350 kilometers/second heats gas to millions of degrees producing the X-ray glow shown in purple hues. Curiouser about galaxy group mergers? The Cheshire Cat group grins in the constellation Ursa Major, some 4.6 billion light-years away.