There is a lot of interesting stuff in that graphic.
Posted by A Farmer at 8:41 PM 0 comments

I've had some time at work to find links, so I've got some more today:

GMO Yeast Mimics Flavors Of Hops, But Will Craft Brewers Bite? – The Salt

A Novel Virus Killed 24,000 Piglets In China. Where Did It Come From? – Goats and Soda

When the Death of a Family Farm Leads to Suicide – NYT

Scott Walker Dismayed That Wisconsin Apparently Smarter Despite Cuts in Education – Borowitz Report.  A little humor for you.

The Whitewashing of King’s Assassination - The Atlantic

Trump and His Tariffs - Counterpunch

Trump Tariffs Stick It to U.S. Manufacturers  - Bloomberg and Midwest Farmers Have Trump to Thank for Their Latest Export Woes – Bloomberg.  I'm getting the feeling that Bloomberg thinks the tariffs are stupid policy. 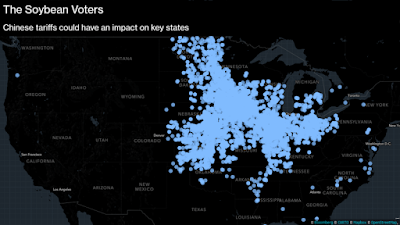 Email ThisBlogThis!Share to TwitterShare to FacebookShare to Pinterest
Labels: Bad Ideas, Beer and other gifts from God, Civil society, Food for Thought, Fools and Their Money (Temporarily), Idiots, News in the Midwest, Rust Belt, US history

METALLURGIST from realbakirov on Vimeo.

Notre Dame won the women's championship in dramatic fashion last night.  Villanova and Michigan battle for the men's title tonight.  Here are a few more interesting stories for your enjoyment:

Goodbye, Kansas Wheat? – Successful Farming.   Farmers may not think humans are to blame for climate change, but it still is going to wreak havoc on agriculture:


He owns land in southwestern Iowa near Glenwood, Red Oak, and Shenandoah where he grows corn and soybeans. The land is considerably more expensive, but he’s confident he can be profitable in Iowa vs. southwestern Kansas.
It’s not just an economics issue, he says. The area has become so arid and water is so scarce that it’s become a battle just to secure enough to grow even irrigated crops.

A Dangerous Antibiotic-Resistant Gene Has Spread The World. We Now Know Where It Started - Science Alert

“They Could Have Made a Different Decision”: Inside the Strange Odyssey of Hedge-Fund King Eddie Lampert - Vanity Fair

Mobbed Up - Harper's.  On the US misadventures in Afghanistan. 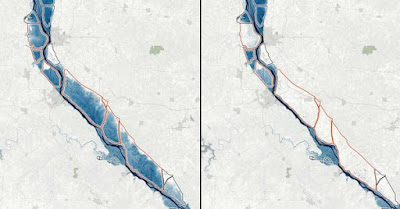 Email ThisBlogThis!Share to TwitterShare to FacebookShare to Pinterest
Labels: Bad Ideas, Basketball, Engineering and Infrastructure, Food for Thought, Fools and Their Money (Temporarily), News in the Midwest, the Church, the National pastime, War

It's time for the annual re-post of a George Will column.  Don't worry, it is only baseball trivia:


"There'll be two buses leaving the hotel for the park tomorrow. The 2 o'clock bus will be for those of you who need a little extra work. The empty bus will leave at 5 o'clock." -- Dave Bristol, Milwaukee Brewers manager, 1972
WASHINGTON -- Everyone needs extra work to prepare for the season. So, name the player or players who:
1) Is the fourth (the others are Babe Ruth, Hank Aaron and Willie Mays) with a career .300 average, 500 home runs and 100 stolen bases.
2) Played in the most wins.
3) Was the last to get 3,000 hits without winning a batting title.
4) Got 30 homers and 100 RBIs in a season for five different teams.
5) Struck out three times in a game just once in 13 seasons.
6) Hit .461 at home but .286 on the road.
7) Was the last person to enter September batting over .400.
8) Led his league in hits for three different teams.
9) Hit .408 in a season but lost the batting title.
10) Hit at least 40 doubles in 10 seasons.
11) Was the first 40-year-old with a 100-RBI season.
12) Is the most recent to win consecutive MVP awards.
13) Had the most career homers (399) without a 30-homer season.
14) Has the highest career batting average among players with at least 300 homers.
15) Is the only non-Yankee with 500 home runs and three championships.
16) Are the four right-handed hitters to lead the major leagues in hitting at least three times.

17) Are the two pitchers to have 300 more strikeouts than walks (not counting intentional walks) in a season.
18) Was the only batter to average 200 hits per season in his first 14 seasons.
19) Holds the career record for doubles.
20) Were the three pairs of rookies of the year who were later enshrined in Cooperstown.
21) Holds the record for most four-strikeout games.
22) Struck out in a record 37 consecutive games in a single season.
23) Was the first to win three MVP awards.
24) Are the two third basemen with 500 home runs.
25) Was the first to get 3,000 hits in the 20th century.
26) Had 999 walks with three starts to go in his career and did not reach 1,000.
27) Were the only two to bat cleanup in a World Series at age 20.
28) Led his league in RBIs in 2014 while batting second.
29) Although not in the Hall of Fame until 2017, reached base more than Jeff Bagwell, Roberto Clemente and Tony Gwynn and had five seasons with at least 30 doubles and 70 stolen bases (Ty Cobb had only three).
30) Was the only player with at least 100 triples, 150 homers and 600 stolen bases.
31) Was the only 300-game winner between the world wars.

32) Threw a no-hitter with no walks and 17 strikeouts.
33) Scored the most World Series runs.
34) Was the first White Sox player to be MVP.
35) Won 25 or more games three times in the 1960s but never won a Cy Young award.
36) Won the most ERA titles.
37) Is the only catcher to win three batting titles.
38) Led his league in batting average his first two seasons.
39) Had three seasons with 40 or more homers and fewer strikeouts than homers.
40) Was the Hall of Famer who hit into a record four triple plays.
Bonus question: What manager said, "Our phenoms aren't phenomenating."
Answers (after the jump):