Well, the Bengals might exit the playoffs in the first round yet again, but that won't stop me from sharing some good stories with you:

Water Quality Would Get $4.7 Billion School Tax Diversion - Des Moines Register.  We see who ranks where in Iowa.

Lawyer: 231 children abused in German Catholic choir - USAToday.  The first story I saw just said "German choir."  I had to click through to confirm it was the Catholic Church.  Not that I was surprised.

Inside The Tiny Police State With Seven Armies - The Daily Beast

What Did the Governor Know About Flint's Water, and When Did He Know It? - The Atlantic

The worst idea in the presidential debate: a return to the gold standard - Michael Hiltzik.  Thanks, Ted Cruz.  You have to be smart enough to know this is just blowing smoke up gold bugs' asses.  But you are a big enough of an asshole to actually pretend to believe it.

Which States Rely the Most on Federal Aid - Tax Foundation 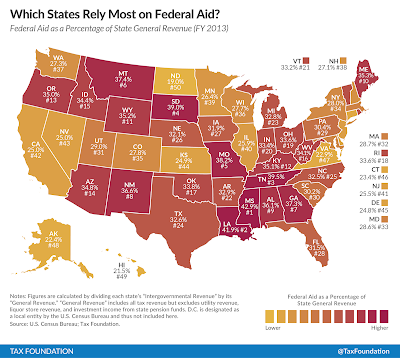 Get Browns 2016 Season Tickets While You Still Can

Email ThisBlogThis!Share to TwitterShare to FacebookShare to Pinterest
Labels: Fools and Their Money (Temporarily), Football, Fun

Matt Taibbi disassembles the Occupy BFE crew in Oregon.  Read it if you enjoy laughing at ridiculous white people.
Posted by A Farmer at 8:13 PM 0 comments

I'm glad you are going to the Hall:

Nomads of Mongolia from Brandon Li on Vimeo. 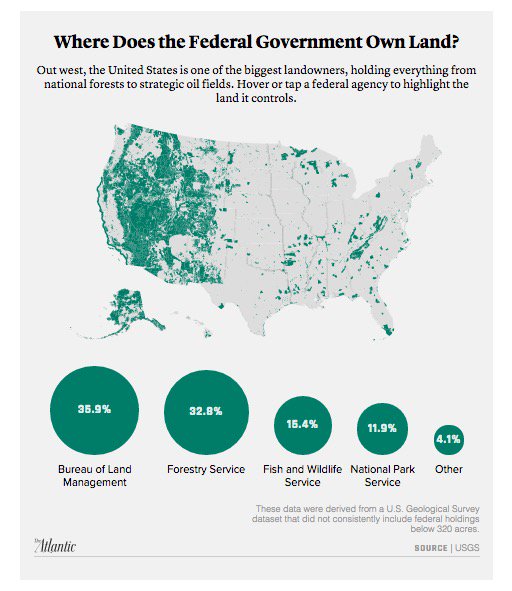 In most of the Northeast and South, where the only federal presence is the occasional military base or national park, complaints that the government owns too much land seem laughable.
But out west, the government lays claim to huge, state-sized swaths of land—more than 630 million acres, greater than the landmass of Texas, California, Florida and New York combined. In some states, government agencies are the biggest landowner; in Nevada, 80 percent of land is federally owned.
Data from the U.S. Geological Survey, which publishes a shapefile of federal land, makes it possible to map these areas, albeit imperfectly. Some private property may be tucked inside the boundaries of otherwise public land, USGS says.
For years, ranchers have bemoaned the government’s hold on western land, which it leases out for grazing through the Bureau of Land Management. Two years ago, when Nevada rancher Cliven Bundy made headlines after leading an armed response to a cattle round-up by federal agents, his unpaid grazing fees to BLM were at issue. (His son, Ammon Bundy, is now among the Oregon occupiers.)
This struggle isn’t new. But for most Americans, this fight doesn’t hit terribly close to home—literally.
Yes, the government owns nearly a third of America. But after mapping federal holdings to county populations, it becomes clear the majority of government land is remote and unpopulated, far from even most rural residents.

Whatever the complaints are about federally-owned land, the ranchers, loggers and miners in the West get a hell of a deal using federal lands.
Posted by A Farmer at 8:50 PM 0 comments 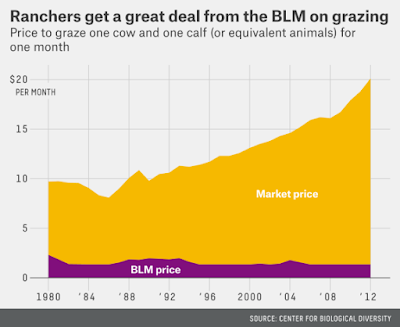 In 1993, the bureau declined to renew Cliven Bundy’s grazing permits in parts of Nevada that were reserved for a threatened desert tortoise. But Bundy continued grazing his cattle there anyway and refused to pay any fines or fees. He claimed that the land really belonged to him, so why should he have to pay over $1 million in fines?
Now his son has furthered the fight by seizing the Oregon refuge. In a news conference Sunday, Ammon Bundy explained that he was there in protest of the “unconstitutional transactions of land rights and water rights.”
Those transactions, though, can be a pretty good deal, regardless of their constitutionality. According to a 2015 report by the Center for Biological Diversity, the Bureau of Land Management’s fees for grazing cattle on public land are much lower than the fees charged by private landowners, and they’ve only become cheaper in recent years.
In 2012, the bureau’s fees for grazing were 93 percent cheaper than the average market rate in 16 Western states ($1.35 versus $20.10 per AUM, which is a fancy acronym for the amount of land needed to support a cow and her calf for a month1).
The bureau’s fees are so much lower than the market price in part because its fees are set at a flat, national rate and can’t be adjusted to match demand in local markets. Plus, the bureau sets that national grazing price using a formula, rather than any kind of bidding system or market appraisals, as some other federal agencies with higher prices2 do. As a result, in 2014, grazing fees covered only 15 percent of the bureau’s costs to maintain grazing lands. The rest of the cost is made up in federal appropriations and covered by taxpayers.
So getting to buy grazing rights from the Bureau of Land Management is a steal, unless, like the Bundys, you think the government is trying to charge you for what’s rightfully yours. Or, at the very least, not rightfully theirs. The Bundys claim the land because their ancestors worked on it before the bureau even existed.

These guys are thugs, deadbeats and criminals.  They are damn lucky they are white, because twelve-year old boys with pellet guns fare much worse in interactions with law enforcement if they aren't. 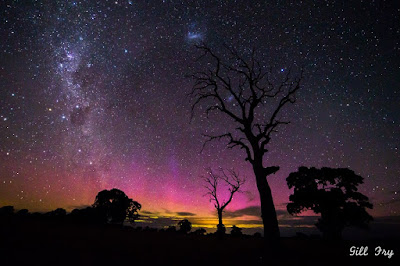 Sky Lights in the New Year
Image Credit & Copyright: Gill Fry
Explanation: Triggered by the impact of a coronal mass ejection on New Year's eve, a moderate geomagnetic storm brought a celebration of sky lights to planet Earth's high latitudes yesterday. In this New Year's nightscape, the shimmering reddish curtains of aurora australis along a southern horizon are captured over Morgiana, SW Victoria, Australia. Of course, more permanent jewels of the southern skies are on the scene. The southern Milky Way, Alpha and Beta Centauri, and bright stars of the Southern Cross are on the left. In silhouette, branches of the large foreground tree stretch across the Milky Way's satellite galaxies, the Large and Small Magellanic clouds. The bright star framed near the tips of tree branches at right is Achernar. Alpha star of the constellation Eridanus, Achernar is sometimes known as the southern end of the river.
Posted by A Farmer at 8:44 PM 0 comments

Yes, I was rather late with the links.  However, here are some interesting stories for your enjoyment:

Down to the Wire - SB Nation

Still Ales: What You Need to About the Flat Beer Trend - Bloomberg.  This one doesn't sound like the trend for me

The Man Who Tried To Redeem the World with Logic - Nautilus

The Long Con - Indianapolis Monthly.  This story is from 2013, but it is part of their "12 Days of Longform" feature, and I love a good Ponzi scheme story.

Our 47 Weirdest Charts from 2015 - Fivethirtyeight 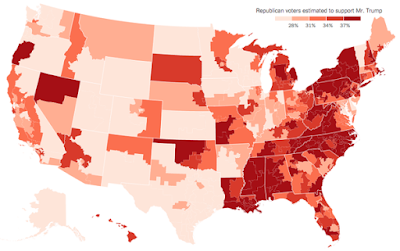 Email ThisBlogThis!Share to TwitterShare to FacebookShare to Pinterest
Labels: Beer and other gifts from God, Civil society, Crooks and Liars, Engineering and Infrastructure, Football, Jerks, Science and stuff, US history

In light of the current flooding in Missouri, I looked up the 1993 flood on wikipedia, and found this interesting story:


An Illinois man, James Scott, 23 at the time, was officially convicted for "intentionally causing a catastrophe" and sentenced to life imprisonment for his role in causing some of the flooding across the river from Quincy, Illinois. In an attempt to strand his wife on the other side of the river so he could continue partying, Scott removed several sandbags from a levee holding back the water. The breach flooded 14,000 acres (57 km²) of farmland, destroyed buildings, and closed a bridge.

We'll file that under bad ideas.  However, a life sentence (actually 20 years to life) would seem a little extreme, at least in isolation from his previous criminal history.