Well, it's been an interesting week in Charleston and at the Supreme Court.  I'll make a little SCOTUS prediction here: John Roberts will write the majority opinion ruling in favor of the Arizona Legislature in the redistricting case on Monday.  I think he's the Republican political mastermind of the Court, and he knows that gerrymandering and voter suppression are keys to Republican political success.  Take a look at the Obamacare, gay marriage and voting cases in the past few years.  In NFIB v. Sebelius and King v. Burwell, he wrote the majority opinion which saved Obamacare from Republicans, and saved Republicans from themselves.  The Obamacare opposition is a political winner in the sticks, but an actual win would be disastrous for Republicans.  On United States v. Windsor, and Obergefell v. Hodges he writes the dissent for the anti-gay marriage lost cause crowd, winning back some of the conservatives who hated on him for the Obamacare opinions.  Finally, in Shelby County v. Holder, and I believe in Arizona State Legislature v. Arizona Independent Redistricting Commission, Roberts will be the majority voice in protecting Republican special interests and minority rule against the onslaught of democracy (he also wrote a concurrence in Citizens United v. FEC, which also massively advantaged ultra-wealthy Republicans and damaged the interests of common citizens) and demographic change, which are the greatest threats to entrenched power.  Interestingly, if that is the case, he'll have argued in three consecutive decision days for the intent of democratically-elected legislators (King), against "activist judges" supposedly short-circuiting the democratic process (Obergefell) and for the supremacy of the legislature in overruling the (most-purely) democratic (referendum) process (Arizona Legislature).  It seems to be pretty flexible logic that continuously advances the power structure of the oligarchy in less-attention grabbing cases while allowing a few bones to be thrown in the direction of social welfare and social progress in the higher profile cases.
Update: Also significant Monday will be how the court rules on Michigan v. EPA.
Further update: I was wrong about the redistricting case, but the Court did rule against EPA.
After that little bit of armchair legal and political analysis, here are some stories I think might be of interest:

A Toast To Butter Sculpture, The Art That Melts The Heart Of The Masses - The Salt.  I love me some butter sculpture.

The Sihks who saved Parmesan - BBC

The burger that could fix fast food - Yahoo

The value of land - Pieria

The Increasing Scarcity of Helium - priceonomics

FedEx's New Electric Trucks Get a Boost From Diesel Turbines - Wired.  From last year, but interesting, and I missed it then.

Silicon Valley is a lie - GQ

It Is Accomplished - Andrew Sullivan

Charleston and the Age of Obama - The New Yorker

Boeing Will Pay High Price For McNerney's Mistake of Treating Aviation Like It Was Any Other Industry - Forbes.  Forbes?  Wow.

Where Same-Sex Couples Live - The Upshot.  Northern Wisconsin?  Wouldn't have guessed that (maybe Monty Python's Lumberjack song was on the money). 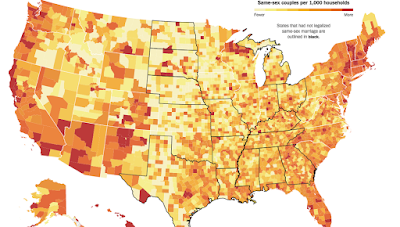 Email ThisBlogThis!Share to TwitterShare to FacebookShare to Pinterest
Labels: Beer and other gifts from God, Civil society, Engineering and Infrastructure, Food for Thought, the National pastime

Remnants from Nate Atwater on Vimeo.

AT&T has been advertising on Reds games that its network covers 97% of the nation's population.  Another way of looking at that is that they don't cover 9.6 million people.  Which is more than the number of people in New York City (8.5 million).  Or almost the population of North Carolina or Michigan (9.9 million).  Or nearly the combined population of Wyoming, Vermont, District of Columbia, Alaska, North Dakota, South Dakota, Delaware, Montana, Rhode Island, New Hampshire and Maine  (9.87 million).  Looking at it that way, that is quite a few people. 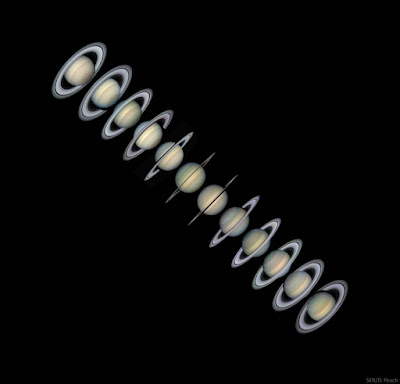 Rings and Seasons of Saturn
Image Credit & Copyright: Damian Peach/SEN
Explanation: On Saturn, the rings tell you the season. On Earth, today marks a solstice, the time when the Earth's spin axis tilts directly toward the Sun. On Earth's northern hemisphere, today is the Summer Solstice, the day of maximum daylight. Since Saturn's grand rings orbit along the planet's equator, these rings appear most prominent -- from the direction of the Sun -- when the Saturn's spin axis points toward the Sun. Conversely, when Saturn's spin axis points to the side, an equinox occurs and the edge-on rings are hard to see. In the featured montage, images of Saturn over the past 11 years have been superposed to show the giant planet passing from southern summer toward northern summer. Although Saturn will only reach its northern summer solstice in 2017 May, the image of Saturn most analogous to today's Earth solstice is the bottommost one.
Posted by A Farmer at 10:39 PM 0 comments

Hat tip to my sister for telling me about this ridiculous tourism campaign:

Email ThisBlogThis!Share to TwitterShare to FacebookShare to Pinterest
Labels: Fools and Their Money (Temporarily), News in the Midwest, US history, You Can't Make This Shit Up
Newer Posts Older Posts Home
Subscribe to: Posts (Atom)