30 years ago today, "One Shining Moment" made its debut on CBS. Here's the original version that started an incredible Tournament tradition. pic.twitter.com/NTUgfVZarW

Bloomberg goes back to follow up on what currently looks like the high point of the Trump era (which actually occurred before the inauguration):


HVAC makers have left the U.S. for the same reason countless other businesses have: cheaper labor. Carrier’s unionized workers in Indy are paid, on average, about $23 an hour (though more recent hires earn $17). Their Mexican counterparts earn an hourly rate of $3. Absenteeism and turnover in Indiana are considerably higher than at the company’s Monterrey operations, Hayes says. He told the Council on Foreign Relations breakfast that his Mexican rooftop AC plant has “probably one of the best-performing workforces that we have around the globe.”
Which isn’t to say that Carrier’s Indy workers, represented by United Steelworkers Local 1999, aren’t productive. They produce 10,000 furnace or fan-coil units a day, or one every seven seconds. According to a 1993 Hartford Courant story, the Indianapolis plant back then produced 500,000 furnaces a year with 1,500 workers. Today it can make four times as many furnaces and fan coils with a slightly smaller workforce—and you don’t have to explain the significance of that to the members of Local 1999. Studies show that 50 percent to 90 percent of job losses at American factories are attributable to productivity gains linked to automation. Except for a blip during the 2008 recession, industrial production in the U.S. has been on a fairly steady rise for decades. Even if Trump struck three Carrier deals a day for the rest of his term, he wouldn’t recoup even half the 7 million American manufacturing jobs lost since that employment peaked in 1979.

Here is a gem that should be repeated anytime some businessperson trots out the "job-killing regulations" line:


The union offered concessions amounting to a third of the $65 million a year Carrier expected to save by moving. Indiana then-Governor Mike Pence and Democratic Senator Joe Donnelly met separately with Carrier and UTC executives. Pence told RTV6 of Indianapolis that the “rising tide of red tape” in Washington made it impossible for Carrier to keep the plant running.
Donnelly says he asked Carrier executive Nelson and Robert McDonough, who runs UTC’s Climate, Controls & Security division, to cite one regulation that figured in the decision. “They couldn’t,” he says. The executives did confirm that furnaces sent to the U.S. from Mexico would have to comply with the same rules. The company later told the union that regulatory costs didn’t figure into expected savings from the move.
“This is about Carrier chasing wages at $3 an hour,” Donnelly says. “They put together a $16 billion stock buyback and just went wherever they could to try to pick up a few extra pennies.”

So what was the outcome of the "deal"?  This:


Carrier struck a deal with the Indiana Economic Development Corp., a public-private agency chaired at the time by Pence. UTC had declined a similar arrangement in 2014 because, in part, it would have required the plant to add workers. According to the current plan, Carrier will receive up to $7 million in state tax credits and training grants over 10 years—about $1,000 per worker per year, a pittance for UTC, which offers to underwrite four years of college education for any employee.
UTC also pledged to spend $16 million on plant upgrades, including automation. That should make the plant more productive, which in turn could lessen the need to seek dirt-cheap wages. But technology tends to shrink payrolls, and that’s likely to happen at Carrier. “We will take a lot of those jobs that today require very low skill and … eliminate those jobs through automation,” Hayes says...He offers little comfort to the sorts of workers whose jobs he reluctantly preserved. “If you have a low-skilled job, they’re not safe no matter where you are,” he says. “The forces of globalization are not going to slow down.”
That’s painfully clear in Indiana. Not far from Carrier, Rexnord LLC is closing a bearings plant and shipping production to Mexico. Trump tweeted about it in December: “This is happening all over our country. No more!” Rexnord’s 350 workers are expected to be gone by summer. Elsewhere in the state, auto parts supplier CTS Corp. in Elkhart is sending production to Asia and Mexico, cutting 230 jobs. Welbilt Inc. closed its Sellersburg beverage systems factory in January and sent production to Mexico, eliminating more than 70 jobs. Harman Professional Solutions shifted some operations in Elkhart to Mexico, killing 125 jobs.
Layoffs at UTC’s Huntington plant began recently. The facility will be closed by early 2018. The Carrier fan-coil lines and related jobs will be gone by the end of this year.

Unfortunately, I don't think anything, especially a blowhard moron jackass President, can staunch the flow of job losses to low wage countries and to automation.  The truth is, we have locked ourselves into an unsustainable, resource-intensive way-of-life that we just can't afford to maintain.  It is just too easy for businesses to use wage arbitrage to make products in low-wage countries and sell them in rich countries.  It doesn't matter whether Trump's excise taxes or Paul Ryan's border-adjustment tax were to go into effect, because each would pummel the millions of Americans in low-paying service jobs, while barely assisting the approximately 9% of Americans who work in manufacturing.  The only thing that could maybe revitalize American manufacturing would be for investors to give up on squeezing more and more profits out of American companies, and settle for allowing workers to gain a much greater share of productivity gains.  You may as well wait for Donald Trump to show humility.
Posted by A Farmer at 10:12 PM 0 comments

Email ThisBlogThis!Share to TwitterShare to FacebookShare to Pinterest
Labels: Civil society, Crooks and Liars, Don't Drink the Tea, News in the Midwest, Rust Belt, Short Memories, The rich get richer

How did Russia, Ohio not make the list? https://t.co/WThWTpB0hU

Email ThisBlogThis!Share to TwitterShare to FacebookShare to Pinterest
Labels: Local history, Strange But True, The rich get richer, Things I Don't Understand

The Birth of a Dugout Canoe

The Birth Of A Dugout Canoe by Northmen from Northmen on Vimeo.

Charts of the Day: Coal in Ohio

From the Columbus Dispatch: 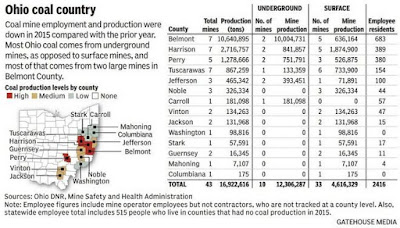 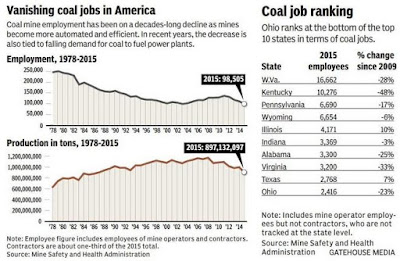 Miners represent just a fraction of 1 percent of the Ohio workforce. Coal companies employed 2,416 miners in the state in 2015, the most-recent number available, down 23 percent from 2009.
For some perspective, the state has more than 95,000 workers in auto, truck and related parts manufacturing. And Ohio's 2,825 florists outnumber the state's coal miners, according to figures from the Mine Safety and Health Administration and the Bureau of Labor Statistics.
But for the Rosebud miners, it's not just a job. It's a legacy. And they share the hope that the new administration will fight to save their way of life.

It's going to take much more than a blowhard idiot President to bring back many mining jobs.
Posted by A Farmer at 9:50 PM 0 comments