My employer is allowing workers to come in late on Tuesday so they can watch Ohio State Monday night.  In the lead-up to the game, here are some stories to read:

How the Redskins Got Their Name - SB Nation.  A review of a children's book promoted by the Washington Redskins propaganda arm.

Brazil Water Supply, Crops Still at Risk a Year after Epic Drought - Scientific American.  That would indicate how epic our bumper crop was, that markets still went in the toilet.

The Cheesemaking Monk of Manitoba - Modern Farmer.  As you know by now, I'm a sucker for agricultural stories featuring Catholic religious.

Against Hoppy Beer - Slate.  I'm not a fan.  I like my malty bocks, marzens, schwartzbiers, etc.

Hard Cider Is Having A Moment - Fivethirtyeight.  It sure has paid off for Boston Beer.  Check the stock price for the release date for Angry Orchard, April 2012, versus now ($107 vs. $284)

Antibiotics: US discovery labelled 'game-changer' for medicine - BBC.  How they grew the bacteria is pretty cool.  Also, see Teixobactin - The Big Picture

Oil-Price Drop Takes Shine Off Steel Town - Wall Street Journal.  As if Lorain and Youngstown need another kick in the nuts.

The Politics of Drinking Water - The Atlantic.  On the anniversary of the Freedom Industries fuckup in West Virginia. 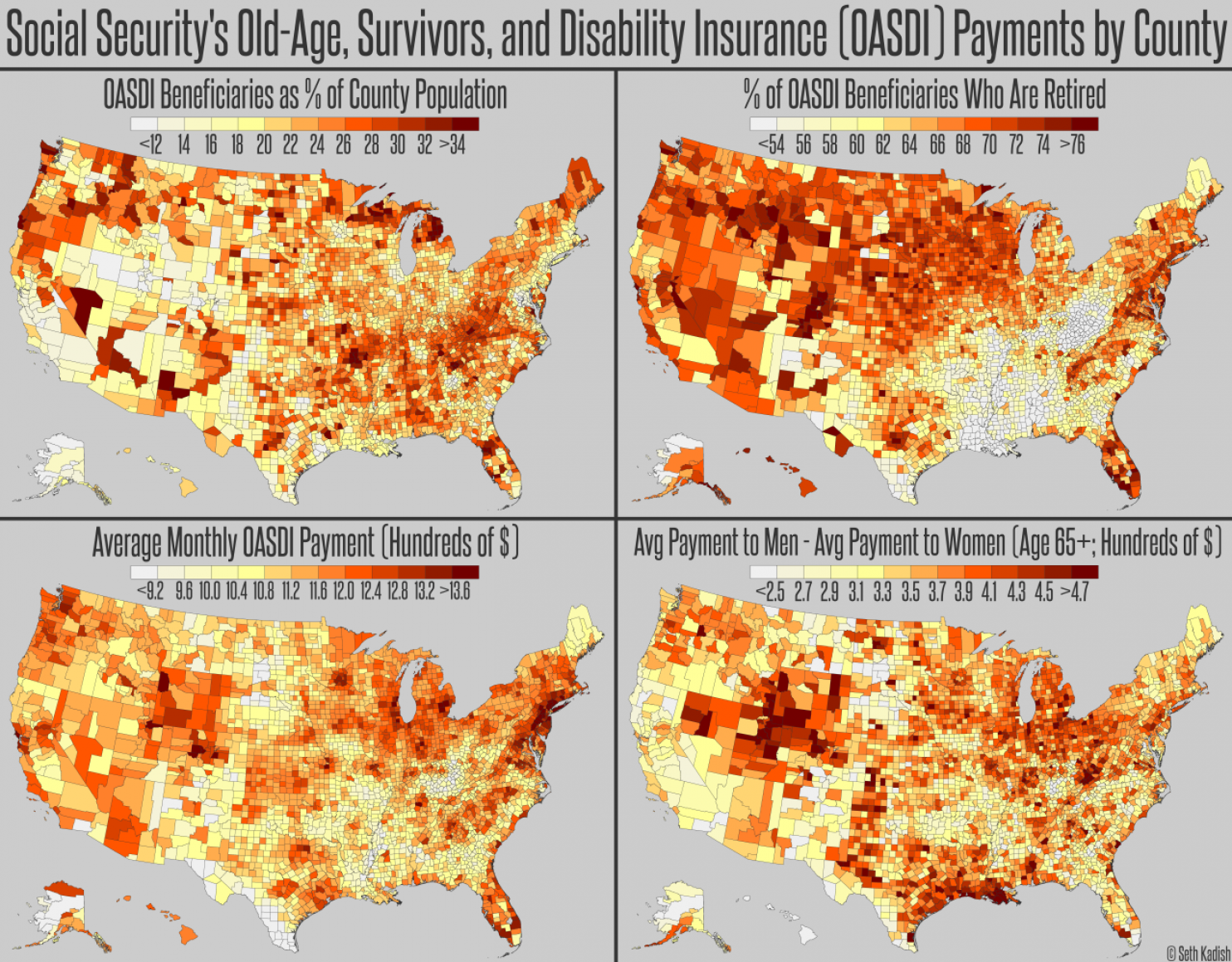 Email ThisBlogThis!Share to TwitterShare to FacebookShare to Pinterest
Labels: Ag news, Bad Ideas, Beer and other gifts from God, Football, News in the Midwest, Science and stuff, the Church, The World Doesn't Revolve Around The U.S.

Email ThisBlogThis!Share to TwitterShare to FacebookShare to Pinterest
Labels: Football, Smaller is Better, Strange But True

Not Fit for Service

It's amazing what you find when you do a little regulating.  Too bad it took a disaster to get somebody to do it.
Posted by A Farmer at 12:36 AM 0 comments

Email ThisBlogThis!Share to TwitterShare to FacebookShare to Pinterest
Labels: Civil society, Crooks and Liars, Engineering and Infrastructure, Government Bought And Sold, Short Memories, You Can't Make This Shit Up 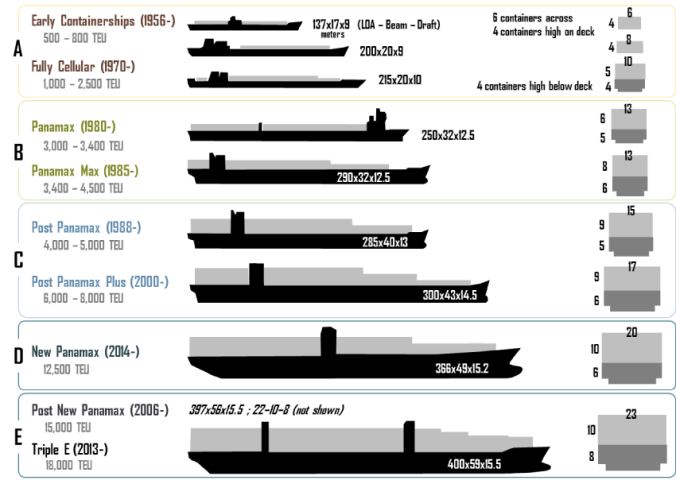 As part of her dissertation project Charmaine Chua is paying a sizable sum to be a passenger on a container ship voyage for 36 days, traveling from Los Angeles to Taipei with numerous ports-of-call in between:


There is uncanny beauty in the monstrous. This, at least, is the feeling that seizes me as I stand under the colossal Ever Cthulu[1] berthed in the Port of Los Angeles. The ship’s hull alone rises eight stories into the air; even from a distance, I am unable to capture its full length or height within a single camera frame. In describing the ship to my friends and my family, I have sought to make adequate comparisons between its size and more familiar objects: The Ever Cthulu is 333 meters (1,100 ft) long, 43 meters (141 ft) across, and 70 meters (230 ft) high. It is taller than an eighteen-story building, the Arc De Triomphe, or Niagara Falls. It as long as a line of seventy cars, the Eiffel Tower tipped on its side, two Roman Colosseums, four New York City blocks, or six and half White Houses. I’ve had a lot of practice picturing this ship. Even so, when I am finally at the foot of its immense mass, I can scarcely believe that this monstrosity will be my home for the next 36 days....
With a carrying capacity of 8,100 TEUs (or twenty-foot equivalent units – the length of a standard container – although today 40-footers are the norm) that can shoulder a total weight of 101,000 tons, the Ever Cthulu would require a 40-mile line of trucks to transport all its cargo. When it was built in 2006, it was the largest ship in the world. Less than a year later, Maersk introduced a new ship class with a capacity almost double that volume, and today, owns the world’s largest ships at carrying capacities of 18,000 TEUs each. Post-Panamax carriers such as the Ever Cthulu – ships that exceed the maximum dimension that can fit in the Panama canal – comprise 16% of the world’s fleet, but carry more than 45% of seaborne goods...
The captain tells me that the Ever Cthulu, like all other ships, never stops for a break. It continues traversing the globe’s surface in 45-day rotations, reaching one end of its route and turning around almost immediately. Container ships are monuments that move, and 100, 000 of them ply the oceans at any given moment. In 2014, the Ever Cthulu traveled a total of 103,000 sea miles — halfway to the moon. All that distance, all that steel, all that power. Yet, even ships as large as these require very little human labor: a few seamen to navigate, engineers to monitor the ship’s internal workings, others to keep watch, clean, fit, change the oil. The Ever Cthulu itself has a crew of 22 men – four German, one Polish, seventeen Filipino, and one passenger: myself. Across the world’s ocean, 1.5 million invisible seafarers toil on three to nine month contracts to bind the world together through trade, though they remain, for the most part, isolated in their cabins and mess rooms, retained on precarious short-term contracts, and kept away from their families – indeed, from most of the world.

The numbers are unfathomable to me.  Overall, it is a well-written and informative post.  Hopefully, I'll remember to check back for later installments.
Posted by A Farmer at 9:37 PM 0 comments

Email ThisBlogThis!Share to TwitterShare to FacebookShare to Pinterest
Labels: Engineering and Infrastructure, People Don't Understand Numbers, Strange But True, The Pyramid Scheme of the World Economy

Timelapse: Drilling and Fracking a Well

Damn, that looks expensive.
Posted by A Farmer at 7:40 PM 0 comments

Email ThisBlogThis!Share to TwitterShare to FacebookShare to Pinterest
Labels: Engineering and Infrastructure, Peak oil, The Pyramid Scheme of the World Economy

Buying When Others Are Selling

Not surprisingly, this Bloomberg headline was click-bait for me:

A decade after expanding its grain business during a slump in prices, the Richardson family of Winnipeg, one of the richest in Canada, is making a similar bet on oil.
With crude futures collapsing to the lowest in more than five years, the Richardson’s Tundra Oil & Gas unit last month agreed to buy 550 wells in Manitoba, part of a $410 million divestiture of Canadian assets by EOG Resources Inc. (EOG) Tundra’s biggest purchase ever will boost its output this year by one-third to 32,000 barrels a day, and Chief Executive Officer Ken Neufeld says he remains on the lookout for more deals...
As the oil slump forces some energy companies to cut spending, Tundra said it will expand drilling in a bet that prices will rally. To zig when others zag isn’t new for privately-held James Richardson & Sons Ltd., a company founded as a crop merchant more than 157 years ago, before Canada became a nation. Over the past decade, the family invested in grain facilities during a drought and expanded in financial services amid the worst economic crisis since the Great Depression.
Those earlier bets paid off. In November, Canadian Business magazine ranked the Richardsons as the nation’s eighth-wealthiest family at C$5.05 billion ($4.3 billion), up 14 percent from 2013. The company, one of Canada’s largest grain handlers, is shared by nine fifth-generation relatives, including Hartley Richardson, the current president and chief executive officer, and Carolyn Hursh, its chairwoman.
While the family made its fortune selling grain, the company expanded into oil exploration in 1980 and became the largest producer in Manitoba’s slice of the resource-rich Bakken field. The reserves acquired from Houston-based EOG are located in the Williston Basin, where Tundra has been drilling for more than three decades.
The Richardsons have been there before. When crude fell close to $10 in 1998, making production unprofitable for many companies, the family expanded its investment in energy to 25 percent of assets from about 3 percent, Hartley Richardson said in a March interview. Tundra bought in Alberta, including a stake in Western Oil Sands Inc., a company with 20 percent interest in Athabasca Oil Sands Project that was later purchased by Marathon Oil Corp. (MRO) for C$5.8 billion.
Another payoff came in late 2004, when Tundra unearthed the biggest oil reserves in Manitoba in almost half a century, after drilling near Sinclair, Manitoba, a small community near the Saskatchewan border. The Richardsons became the province’s top producer, surpassing a Chevron Corp. (CVX) unit.
The Richardsons took a similar approach in grains a decade ago, when spring-wheat production fell to a 30-year low and some farmers abandoned fields that were too dry to plant. After an adviser warned there was no future in the business that James Richardson started in 1857, Hartley Richardson said the company began one of its biggest expansions, acquiring grain depots and loading facilities. In 2012, after the government had dismantled the marketing monopoly of the Canadian Wheat Board, the Richardsons paid C$900 million for parts of Viterra Inc., the nation’s largest grain handler, which had been acquired by Glencore Xstrata Plc (GLEN) for C$6.1 billion.

You know, that is a pretty damn impressive track record.  No matter what the crooks on Wall Street do short-term, I'd bet long term with these guys. It reminds me of this:

"Potter isn't selling, Potter's buying." If there's one thing you can learn from "It's A Wonderful Life," it's that succinct statement. The Richardsons may not be as mean as Old Man Potter, but they are buying when everybody else seems to be selling out their oil positions, on what will almost certainly be temporarily depressed prices. They've done it before, and it paid off massively. I think this will, too.
Posted by A Farmer at 7:23 PM 0 comments

Email ThisBlogThis!Share to TwitterShare to FacebookShare to Pinterest
Labels: Do as I say not as I do, Other Parts of North America, Peak oil, The rich get richer 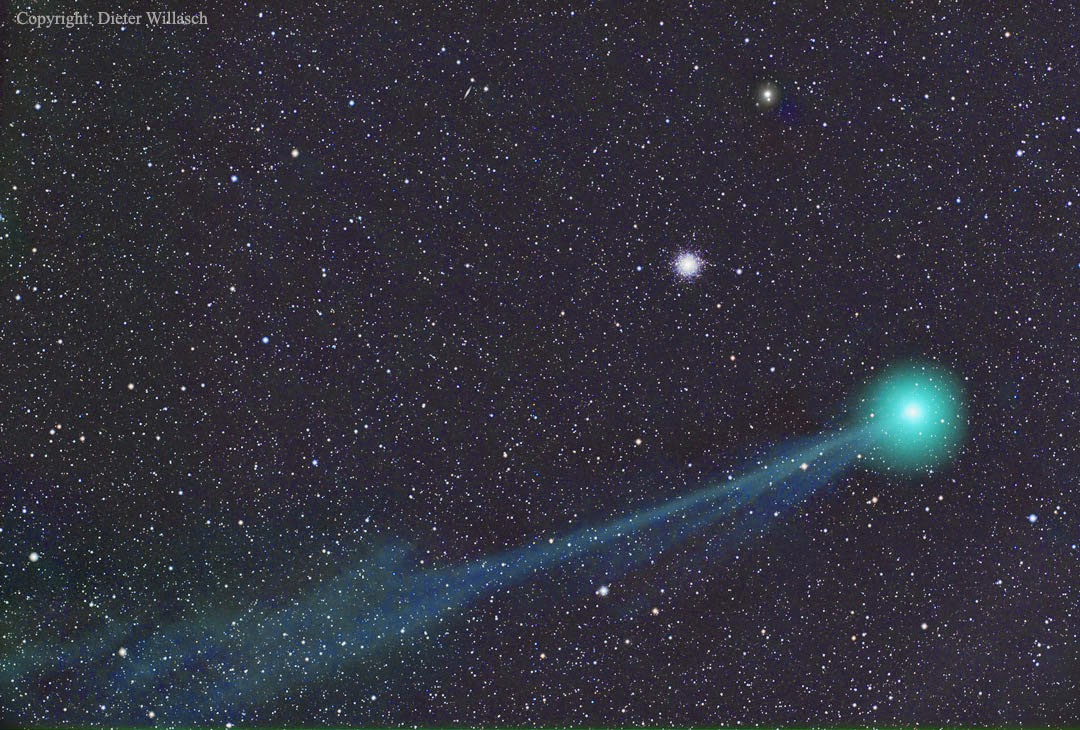 Comet Lovejoy before a Globular Star Cluster
Image Credit & Copyright: Dieter Willasch (Astro-Cabinet)
Explanation: Comet Lovejoy has become visible to the unaided eye. To see the comet, just go outside an hour or so after sunset and look for a fuzzy patch to the right of Orion's belt. Binoculars and a star chart may help. Pictured here, Comet C/2014 Q2 (Lovejoy) was captured three days ago passing nearly in front of M79, the globular star cluster visible as the bright spot slightly above and to the left of the comet's green-hued coma. The nucleus of Comet Lovejoy is a giant dirty iceberg that is shedding gas into a long and intricate ion tail, extending across the image, as it nears the Sun. The comet is expected to become even easier to spot for northern observers during January, as it is rises earlier and, hopefully, continues to brighten.
Posted by A Farmer at 10:29 PM 0 comments 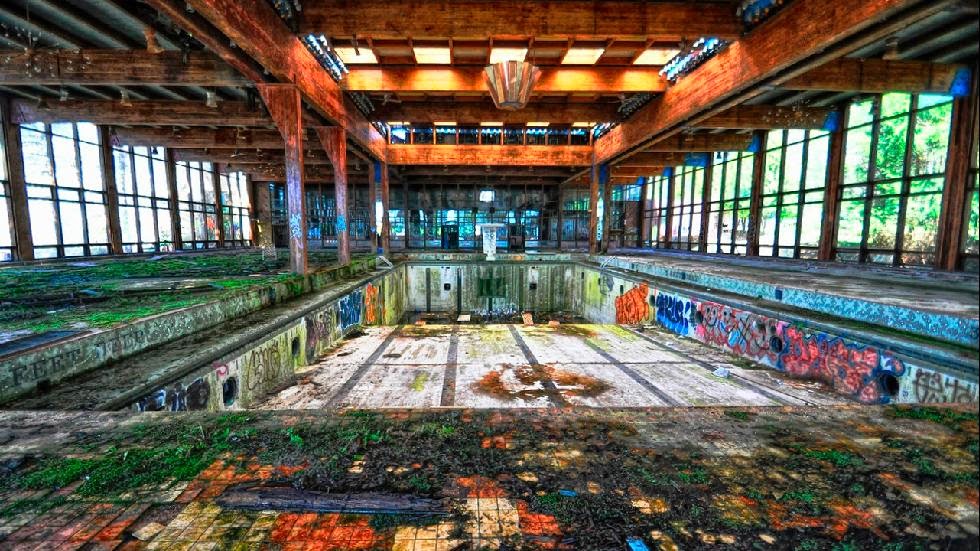 The swimming pool of the abandoned Grossinger's Catskill Resort Hotel in Liberty. The hotel, part of the so-called 'Borscht Belt', once welcomed 150,000 visitors annually but it was abandoned in 1986. The Catskill Mountains are littered with run-down buildings built when the area was a popular summer retreat. (Flickr/Forsaken Fotos)

It is amazing how many of the photos are of places which were recently abandoned.  Ohio's is an abandoned shopping mall in Akron, which was built in 1975.  Just another reminder of how wasteful American society is.
Posted by A Farmer at 7:03 PM 0 comments

Email ThisBlogThis!Share to TwitterShare to FacebookShare to Pinterest
Labels: Civil society, Do as I say not as I do, Fools and Their Money (Temporarily), Strange But True

Inside the Home of the New Year's Eve Ball