The Clock of the Long Now

The Clock of the Long Now from Public Record on Vimeo.

Email ThisBlogThis!Share to TwitterShare to FacebookShare to Pinterest
Labels: Engineering and Infrastructure, Fools and Their Money (Temporarily), Strange But True

Well, the holiday season is almost upon us.  Here are some interesting stories to check out before the relatives start showing up in town:

Why Him, Why Me? - ESPN the Magazine

Say Hello to the Apple that Never Browns - Buzzfeed

Heat Records Shatter as a Monster El Nino Gains Strength - Bloomberg, and Record-crushing October keeps Earth on track for hottest year in 2015 - Washington Post.  Check out the graph in the Post article, it is scary.

The History of Plaid - Pacific Standard

How to Be a Lawyer Without Going to Law School - Priceonomics

'The Attacks Will Be Spectacular' - Politico.  On the CIA before and after September 11. 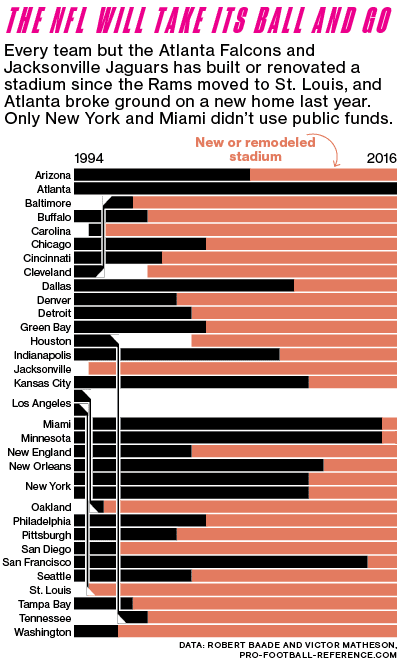 "By This Shall All Men Know That You Are My Disciples"

Remember this next time Mike Pence claims to be a Christian:

"It is the right thing, the humane thing to do," Malloy told reporters. "Quite frankly, if you believe in God, it’s the morally correct thing to do."
The family of three fled from Syria to Jordan when their 5-year-old son was less than 1 and is the first family to be redirected after 26 governors objected this week to accepting Syrian refugees, according to The New York Times.
The status of a family of four that was supposed to arrive Dec. 10 in Indianapolis, where they have friends, is in limbo as Catholic Charities weighs how to respond to Pence's request that the family be directed elsewhere.
"There’s still just a lot of information that we’re all waiting on," said Heidi Smith, director of refugee services for Catholic Charities Indianapolis. "In the meantime, there’s refugees that have no control of their lives and no place to go and nobody wants them. And we have to think about what it would be like to be in their shoes."
The state Division of Family Resources sent a letter Tuesday to Exodus Refugee Immigration and to Catholic Charities Indianapolis asking that all Syrian arrivals be “suspended or redirected to another state that is willing to accept Syrian placements until assurances that proper security measure are in place have been provided by the federal government.”....
Pence tweeted Wednesday that he will "maintain this policy until the Administration and Congress acts to ensure the security of our Hoosiers."
Malloy told reporters Pence doesn't have legal authority to reject Syrian refugees.
"But this is the same guy who signed a homophobic bill in the spring surrounded by homophobes," Malloy said, referring to Indiana's Religious Freedom Restoration Act that critics said would allow discrimination against gay, lesbian, bisexual and transgender people. "So I’m not surprised by anything the governor does."

Pence is an embarrassment, but I expect nothing less from Indiana.  I can't believe how supposedly tough guy Republicans are such bed-wetting chickenshits (which is actually an insult to bed-wetters and chicken shit).
Posted by A Farmer at 9:42 PM 0 comments

Email ThisBlogThis!Share to TwitterShare to FacebookShare to Pinterest
Labels: Do as I say not as I do, Don't Drink the Tea, Idiots, Jerks, News in the Midwest, Profiles in Cowardice, the Church, the crossroads of politics and stupidity

Email ThisBlogThis!Share to TwitterShare to FacebookShare to Pinterest
Labels: Idiots, Profiles in Cowardice, the crossroads of politics and stupidity, War Criminals and the Security State

HyperZooming through Hallstatt from geoff tompkinson on Vimeo.

Email ThisBlogThis!Share to TwitterShare to FacebookShare to Pinterest
Labels: Across the Atlantic, cool stuff, Things I Don't Understand 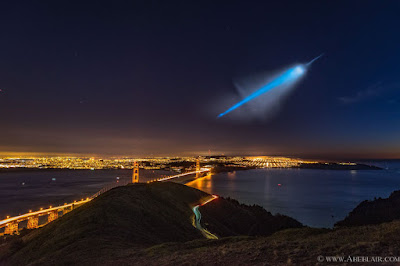 An Unexpected Rocket Plume over San Francisco
Image Credit & Copyright: Abe Blair (Abe Blair Gallery)
Explanation: What is that unusual light in the sky? A common question, this particular light was not only bright but moving and expanding. It appeared just as the astrophotographer and his friend were photographing the Golden Gate Bridge in San Francisco, California against a more predictable night sky. They were not alone in seeing this unusual display -- at least hundreds of people in California reported a similar sight. The consensus of experienced sky observers was that the plume resulted from a rocket launch -- an explanation that was soon confirmed as an unpublicized test of a submarine-launched, unarmed, Trident II D5 nuclear missile. Such tests are not uncommon but do not usually occur just after sunset near a major metropolitan area -- when they are particularly noticeable to many people. Were plume images not posted to the Internet and quickly identified, such a sky spectacle might have been understood by some to be associated with more grandiose -- but incorrect -- explanations.
Posted by A Farmer at 9:30 PM 2 comments