Six decades after a banana-killing fungus all but wiped out plantations across Latin America, a new strain threatens to destroy global harvests.
A type of Fusarium wilt appeared this year in Australia’s main banana-growing state after spreading to Asia and Africa. While the fungus has been around since the 1990s and has yet to affect top exporter Ecuador, Fresh Del Monte Produce Inc. called it a potential “big nightmare.” The United Nations says the disease threatens supply, and Latin American growers are taking steps to limit the risk.
The industry survived the demise of the top-selling Gros Michel banana in the 1950s by switching to a different variety, called the Cavendish. But this time, there’s no ready substitute. Americans now eat bananas almost as much as apples and oranges combined, and are the biggest buyers in an export market valued at more than $7 billion.
“We don’t have anything that can replace the Cavendish,” said Gert Kema, a plant research leader at Wageningen University in the Netherlands, who studies banana diseases.
Part of the problem is the way the market evolved more than a century ago, relying on a single breed rather than several varieties.
In 1870, the founder of what became Chiquita Brands International Inc. imported 160 bunches of bananas from Jamaica to the U.S. that he sold at a profit, kicking off an American industry built around perishable tropical fruit from overseas that competes with cheap, locally grown apples.

I don't think that the risks of genetic homogeneity are limited to bananas. Oh, wait, that's in the article:


A lack of plant diversity isn’t unique to bananas. After a history in which more than 7,000 species were cultivated for human consumption, today just four crops -- rice, wheat, corn and potatoes -- are responsible for more than 60 percent of human energy intake, the UN’s Food & Agriculture Organization estimates.


The history of the fruit is fascinating.  And disturbing.
Posted by A Farmer at 11:20 PM 0 comments

The Environmental Working Group thinks so: 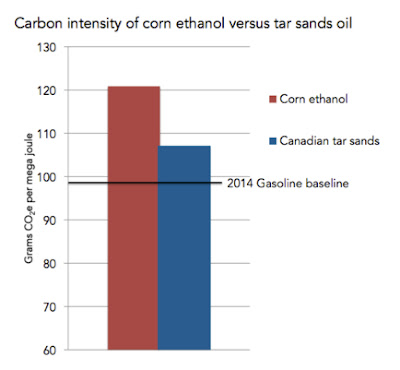 Last year, corn ethanol producers churned out 14 billion gallons, about 13.4 billion gallons of which were blended into the 135 billion gallons of gasoline the nation’s drivers used.
Extracting tar sands and turning them into oil is more energy-intensive than traditional drilling for petroleum. According to the Natural Resources Defense Council, dirty oil transmitted from Alberta, Canada, to the Gulf Coast by the Keystone Pipeline would emit 24 million tons of carbon per year. But our calculations show that last year’s production and use of 14 billion gallons of corn ethanol resulted in 27 million tons more carbon emissions than if Americans had used straight gasoline in their vehicles. That’s worse than Keystone’s projected emissions. It’s the equivalent of emissions from seven coal-fired power plants.1So far the federal corn ethanol mandate has resulted in a massive influx of dirty corn ethanol, which is bad for the climate and bad for consumers. The only interest it benefits is the ethanol industry.1. Calculated by comparing the emissions from 14.3 billion gallons of gasoline (using 2014 baseline) EPA’s estimate of corn ethanol emissions. Coal plant emissions use an estimate that a typical coal plant emits 3.5 million tons of CO2per year

I'm not going to get down in the weeds and argue against the idea that ethanol fuel isn't a bad, and market warping, idea.
Posted by A Farmer at 8:37 AM 0 comments


Pulsating Aurora over Iceland
Video Credit & Copyright: Stéphane Vetter (Nuits sacrées); Music: Eric Aron
Explanation: Why do some auroras pulsate? No one is sure. Although this unusual behavior has been known for a long time, the cause remains an active topic of research. Featured here is a dramatic video that captured some impressive pulsating auroras in mid-March over Svínafellsjökull Glacier in Iceland. The 48-second video is shown is not time-lapse. The real-time pulsations are exemplified by sequences where the astrophotographer is visible moving about in the foreground. A close inspection of the enigmatic flickering sky colors reveals that some structures appear to repeat, while others do not. The quick rapidity of the pulsations seen here is somewhat unusual -- more common are aurora with pulsations that last several seconds. Recent research shows that pulsations are more common in electron-generated aurora, rather than proton aurora, and that the Earth's local magnetic field mayfluctuate in unison.
Posted by A Farmer at 7:02 AM 0 comments