If you work at a bank, a school or a government office, you've got a three day weekend.  For the rest of us, there are two days to take in these stories:

The Gyms of Holmes County - SB Nation.  Even though this story generally follows girls basketball, Perry Reese, Jr. gets a shout out.  If you've never read the remembrance of Reese in Sports Illustrated, I highly recommend it.

The Wow Factor - ESPN the Magazine

Buy Crop Insurance, Double Your Money and The Shocking Truth About America's Ethanol Law: It Doesn't Matter (For Now) - A government subsidy for farmers twofer from The Salt.  And yes, the crop insurance article is pretty accurate.  We seem to get about 7 to 10 years' premiums back most times we have a major claim on crop insurance.

For $100 and Some Beer, This Student Spent Three Months Camping on a Dairy Farm - Modern Farmer

What Americans Used To Eat - Priceonomics

The Tragedy of the Woolly Mammoth: Does An Economic Problem Explain Their Extinction - Pacific Standard

The chips are down for Moore's Law - Nature


Poverty in Charlotte: 'It Was Never OK' - Charlotte Magazine

How America Is Putting Itself Back Together - James Fallows.  Fallows is one of my favorites, and the American Futures series has been excellent.  This is the summary article.

Why Today's GOP Crackup Is the Final Unraveling of Nixon's 'Southern Strategy' - The Nation.  America would be a better place if it was.

Trump questions Cruz's faith - The Hill.  If Ted Cruz is an exemplary Christian: A. I don't want to be a Christian, and B. I may be a black man.

The Facebook Primary - FiveThirtyEight. If Carson is #1, it is kind of meaningless, but interesting nonetheless.

A Guide For Ash Wednesday 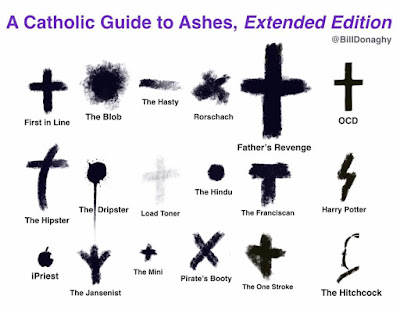 Email ThisBlogThis!Share to TwitterShare to FacebookShare to Pinterest
Labels: 'Tis The Season, Fun, the Church

It's a Hard Knocks Life For Us (Whites) 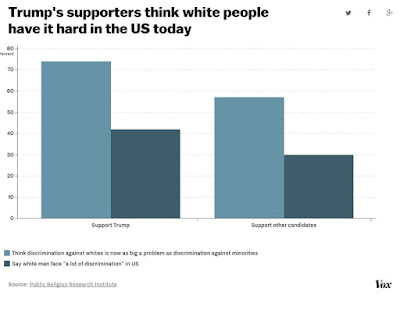 A little more data from the source of this chart:

I'm sorry, but that is absurd.  There is nothing easier than being white in America.
Posted by A Farmer at 10:50 PM 0 comments

Email ThisBlogThis!Share to TwitterShare to FacebookShare to Pinterest
Labels: Civil society, Things I Don't Understand, You Can't Make This Shit Up

Some People Just Have Too Much Money


Stan Kroenke, the billionaire owner of the NFL’s Rams, has agreed to purchase the historic W.T. Waggoner Estate Ranch in Texas, representatives of the ranch said on Tuesday. Terms for the purchase of the more than 520,000-acre estate were not disclosed. The ranch had been listed with an asking price of $725 million.
District Judge Dan Mike Bird in Vernon, Texas, allowed the family owners of the Waggoner Ranch to proceed in a private transaction with Kroenke, one of the wealthiest owners in professional sports and the owner of 11 ranches in Montana, Wyoming, Arizona, and British Columbia. The Waggoner went on the market in 2014 after Judge Bird ordered a sale to end more than 20 years of family litigation...
Kroenke recently decided to move his National Football League team from St. Louis to a privately financed $1.8 billion stadium in Inglewood, Calif. Along with the Rams, he also owns the National Basketball Association’s Denver Nuggets, the National Hockey League’s Colorado Avalanche, Major League Soccer’s Colorado Rapids, and two-thirds of the English Premier League’s Arsenal soccer club. Kroenke’s fortune is worth about $6.2 billion, according to Bloomberg estimates.
The Waggoner is the largest U.S. ranch within one fence, marketed as measuring 520,527 acres (210,650 hectares), or 800 square miles (2,072 square kilometers). The sale to Kroenke will include additional acreage that brings the total to about 535,000. The King Ranch, based in South Texas, has more acreage spread over several parcels....With 6,800 head of cattle, the Waggoner is one of the 20 largest cattle ranches in the U.S. and is known worldwide for its quarter horses, which number 500. The ranch also has 1,000 oil wells, 30,000 acres of cropland, and an abundance of deer, quail, feral hogs, waterfowl, and other wildlife.

Email ThisBlogThis!Share to TwitterShare to FacebookShare to Pinterest
Labels: Ag economy, The New Gilded Age, The Pyramid Scheme of the World Economy, The rich get richer, You Can't Make This Shit Up

Lead in Water a Major Problem In Pennsylvania 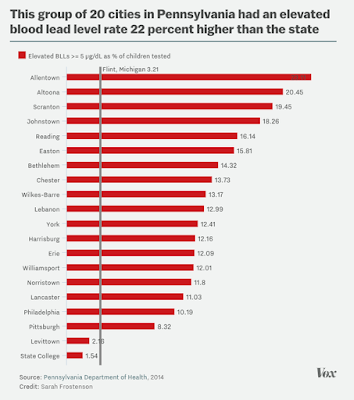 Cities like Allentown and Altoona had more than double the state exposure rate of 9.37 percent, and the group of 20 cities had a collective rate of 11.49 percent, also higher than the state rate. The geometric mean of blood lead level tests performed in Pennsylvania was 2.3 µg/dL, which is substantially lower than the state's rate, indicating some cities in Pennsylvania are disproportionately impacted by lead exposure.
The percentage of confirmed lead exposure cases in Pennsylvania has decreased by 47 percent in children under the age of 7 since 2007, but these 20 cities continue to remain incredibly vulnerable. The Pennsylvania Department of Health reported that the primary source for childhood lead poisoning in Pennsylvania is exposure to aging, deteriorating lead-based paint (chips and dust).
Pennsylvania does not have a universal testing law, so there is no mandate for children to be tested by a certain age. However, health care providers are required to test children on medical assistance at age 1 and 2, and most clinical practices recommend testing children under 7. Both groups have experienced an increase in the number of children tested since 2007, but it should be noted that only a quarter of the children under 3 are tested and between one-seventh and one-eighth of the population of children under 7 are tested.

The Lead Industries Association (LIA) was formed in 1928 as the lead industry’s trade organization. Its membership encompassed both producers and users of lead products and included all the major producers. Lead mining and manufacturing was dominated by just 6 companies (all LIA members) until the 1960s: the National Lead Company, American Smelting and Refining, Anaconda, the Hecla Mining Company, Eagle Picher, and the St Joseph Lead Company.31 The National Lead Company was by far the largest.32
As would be expected of an industrial trade association, a central function of the LIA was to promote the sale of its members’ products. Lead pipe, of course, was one of them.

We are endeavoring to keep abreast of any impending changes in plumbing codes. . . . We have also been investigating the use of lead in service pipe and other applications. We have been accumulating useful information pertaining to lead and expect soon to make it the basis of a modest educational campaign within the limits of the current budget.33

Although most of the lead industry’s efforts to promote the use of lead in plumbing emphasized the positive (i.e., the advantages of lead over other materials), there clearly was some concern that the potential health hazard of lead pipes could jeopardize the market for lead pipes....
According to the secretary, 1938 was a banner year for the LIA. The association now had 3 representatives working on its Plumbing Promotion Program. Most of their time was taken up that year by attendance at 24 state conventions of master plumbers and by speaking at 19 of them. Outreach materials were produced and distributed to plumbers who were actively attempting to change their local building codes. The association’s trade publication, Plumbers’ Forum, had a mailing list of 22500. Plans were announced to “work with various housing authorities to have lead specified in the plumbing of . . . large developments.”43 Plumbing code regulations were changed in Pennsylvania (to require lead for plumbing), Massachusetts (removal of the 5-foot limitation on lead), and in dozens of other cities. In this connection, the secretary reminded the members that

It must be remembered that adoption of laws, as above, is slow work, but once adopted, make a relatively permanent requirement of lead. In many cities, we have successfully opposed ordinance or regulation revisions which would have reduced or eliminated the use of lead. We have prevented elimination of lead work from examinations for plumbers’ licenses in New York and other cities, and have introduced license examinations with a lead work requirement in many places where no examinations for lead work were formerly required.43(pp3–4)

In cities where lead had fallen out of favor for a number of years, there was the danger that, even if a revised plumbing code reinstated lead as a permitted or required material, there would not be a sufficient number of plumbers trained in its installation and repair. Consequently, the LIA expended some effort to train a labor force skilled in working with lead. Cooperating with the Federal Committee on Apprentice Training, in 1938 the LIA established classes in several cities, including Chicago; Pittsburgh; San Francisco; St Paul, Minnesota; Wilkes-Barre, Pennsylvania; Youngstown, Ohio; and Phoenix.

Now there is a perfect example of lobbyists crafting legislation to benefit an industry at the expense of public safety.  Requiring the use of lead pipes at a time when science had already established the danger of lead?  That is crazy.  Training workers to install the pipes because they had fallen out of favor due to the risk of lead poisoning?  Crazier.  I really couldn't believe it when I read in a story about Flint that Pennsylvania required lead pipes for a while.  But damn if that isn't true.  No wonder many cities there have even greater lead poisoning issues than Flint.
Posted by A Farmer at 12:05 AM 0 comments 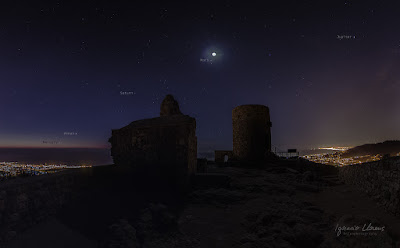 Five Planets at Castell de Burriac
Image Credit & Copyright: Ignacio Llorens
Explanation: February's five planet line-up stretches across a clear sky in this predawn scene. A hilltop Castell de Burriac looms in the foreground, overlooking the town of Cabrera de Mar near Barcelona, Spain, planet Earth. The mosaicked, panoramic image looks south. It merges three different exposure times to record a bright Last Quarter Moon, planets, seaside city lights, and dark castle ruins. Seen on February 1st the Moon was near Mars on the sky. But this week early morning risers have watched it move on, passing near Saturn and finally Venus and Mercury, sliding along near the ecliptic toward the dawn, approaching the February 7 New Moon.
Posted by A Farmer at 11:10 PM 0 comments

From the Wall Street Journal, and included in the weekend links: 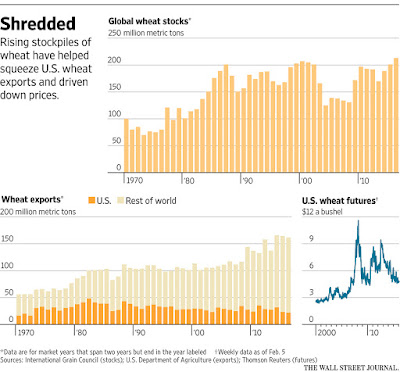