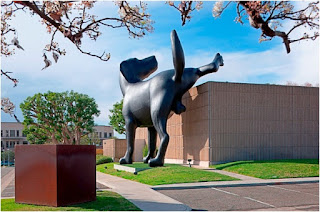 
You got to give props to artist Richard Jackson for staging an exhibit where attendees could get peed on by a 28-foot-tall Labrador Retriever. In the gift shop, are museum umbrellas flying off the shelf?
Jackson's "Bad Dog" sculpture, tacked together from matte-black parts reminiscent of a disassembled stealth bomber, towers above the Orange County Museum of Art with one leg raised in the classic dog-urination stance. Every so often, a spray hose inside the massive canine unleashes a fountain of yellow paint onto the wall of the museum. The fake pee dribbles down the wall to pool on the ground, where curious museumgoers appreciate it with the classic but is it art? posture.
"Bad Dog" is the first thing people see when traveling to the Newport Beach museum's retrospective of Jackson's work, titled "Ain’t Painting a Pain." The meaning of the micturating puppy is cryptic. Exhibition materials don't shed much light on what inspired the artwork, and the media are throwing out all kinds of differing explanations. KCET calls it a "cheeky statement about Jackson's views on the art world." The OC Register goes with "not a joke. Nor is it an insult to the museum." The Daily Pilot doesn't take a critical stance, but notes that it is a "favorite of children who visit the museum."