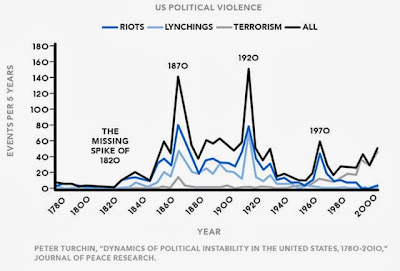 Past waves of political instability, such as the civil wars of the late Roman Republic, the French Wars of Religion and the American Civil War, had many interlinking causes and circumstances unique to their age. But a common thread in the eras we studied was elite overproduction. The other two important elements were stagnating and declining living standards of the general population and increasing indebtedness of the state.
Elite overproduction generally leads to more intra-elite competition that gradually undermines the spirit of cooperation, which is followed by ideological polarization and fragmentation of the political class. This happens because the more contenders there are, the more of them end up on the losing side. A large class of disgruntled elite-wannabes, often well-educated and highly capable, has been denied access to elite positions....This U.S. historical cycle didn’t end with the cataclysm of the Civil War. Huge fortunes were made during the Gilded Age and economic inequality reached a peak, unrivaled even today. The number of lawyers tripled from 1870 to 1910. And the U.S. saw another wave of political violence, spiking in 1919–21.
This was the worst period of political instability in U.S. history, barring the Civil War. Class warfare took the form of violent labor strikes. At one point 10,000 miners armed with rifles were battling against thousands of company troops and sheriff deputies. There was a wave of terrorism by labor radicals and anarchists. Race issues intertwined with class, leading to the Red Summer of 1919, with 26 major riots and more than 1,000 casualties. It was much, much worse than the 1960s and early 1970s, a period many of us remember well because we lived through it (see chart).

That's a pretty interesting take on history.  I think income inequality is a bigger deal than most folks think. Hopefully, the issue can be defused before we have serious political instability.
Posted by A Farmer at 10:36 PM

Email ThisBlogThis!Share to TwitterShare to FacebookShare to Pinterest
Labels: The Endangered Middle Class, The New Gilded Age, The rich get richer