In a little while, I'll be heading to the polls to cast my vote to help bring this horrific toxic sludge dumpster fire of an election to an end.  Even though I can't stand her or her equally dishonest and corrupt husband, I'll be casting my vote for "Crooked Hillary," because, just as I anticipated ten years ago when I foolishly entered the political sphere as a candidate to try to head it off, the Republican party has become an insane, hate-filled death cult determined to undermine civil society and punish "those people."  Unfortunately, many of my friends and neighbors, whom I love and respect, will be supporting her opponent; the greatest buffoon, liar, con man, jackass, idiot and douche bag to ever win a major party nomination.  And considering the 17 candidates the Republicans had to choose from for the primary season, the GOP ably managed to select the very worst from an utterly disgusting field.

I will go to the polls, say hi to the poll worker I know from church, then show him my ID, because Ohio is one of the many states to pass a voter ID bill to try to suppress the vote of poor people and minorities.  Our ignoble politicians know these people usually vote in person, and they want to make it as difficult as possible for them to cast their votes.  If I would've voted absentee, I never would have had to show an ID and never would have to have been seen in order to cast my vote.  Those lying "public servants" will claim that is to prevent voter fraud, even though many more charges of voter fraud arise from absentee voting as opposed to in-person voting.  The difference is that more elderly Republicans vote absentee.  Keep that in mind when Republicans discuss voter fraud today.  After I get signed in, I'll cast my vote and head to work. After work, I'm going to feed the cows, pick up some food and a lot of beer, and settle in and watch the results and post my thoughts here and on Twitter.  I doubt that it will be pretty. Hopefully, the voting will be completed without any violence or massive errors.  But, come Wednesday, it will be morning in America again, and we'll somehow have gotten through this self-inflicted horror show and moved on.  Thank God! 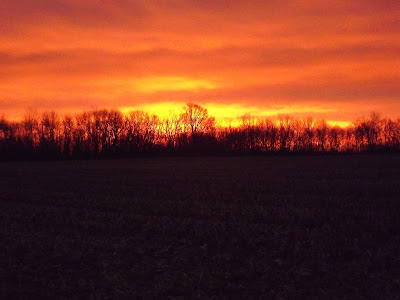 Email ThisBlogThis!Share to TwitterShare to FacebookShare to Pinterest
Labels: 'Tis The Season, Civil society, Don't Drink the Tea, National politics, News in the Midwest, News of the Obvious, You Can't Make This Shit Up