Unbelievably, Lent is almost here and winter is pretty much over.  Here are some stories that caught my attention:

The Next Babe Ruth - Sportsnet

In a Champion's Corner, a Real Coach Who Inspired One on 'The Wire' - New York Times

The Secret Art History on Your Money - New York Times

The enormous scale of the erosion problem at the Oroville dam site - AGU.  Awesome photos from 2 weeks ago.

The 20th century saw a 23-fold increase in natural resources used for building - The Conversation.  I think this is the definition of unsustainable.

End of a golden age - Aeon.  The product of the unsustainable development (in the West) described above.


“People across the country look at the EPA much like they look at the IRS -- and I hope to be able to change that,” Pruitt said.

I doubt that he meant that both agencies are endlessly attacked and undermined by Republicans, to the point that they are woefully unable make sure existing laws are followed, but that is the case.

"I Feel Forgotten": A Decade of Struggle in Rural Ohio - The New Yorker

Under A New System, Clinton Could Have Won The Popular Vote By 5 Points And Still Lost - FiveThirtyEight.  Gerrymandering (or stealing elections) on steroids.  I'd originally meant to write a post about this, but never got around to it. 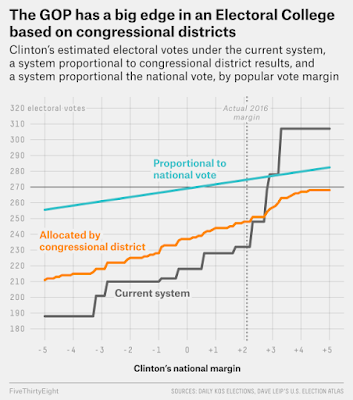 Email ThisBlogThis!Share to TwitterShare to FacebookShare to Pinterest
Labels: Ag economy, Crooks and Liars, Engineering and Infrastructure, Food for Thought, News in the Midwest, Rust Belt, the National pastime, the Sweet Science, US history