Something For Red States To Ponder 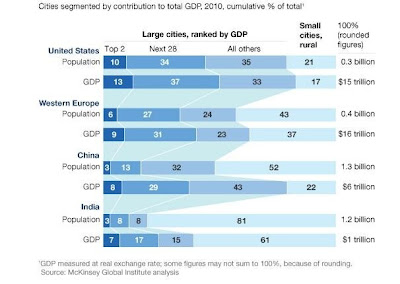 
But a new report from the McKinsey Global Institute offers an curious twist on this old tale. The United States, it turns out, actually derives more economic benefit from its cities than any other country on the planet. Roughly 83 percent of America’s GDP came from its “large cities,” defined as cities with a population of 150,000 or more. By contrast, China got 78 percent of its GDP from large cities and Western Europe got a surprisingly small 65 percent of its GDP from its large urban areas.The report’s authors argue that the city gap between the United States and Europe account for about three-quarters of the difference in per capita GDP between the two. In other words, the United States appears to be wealthier than Europe because it has a greater share of its population living in large, productive cities.
All told, some 80 percent of Americans live in large cities, versus just 58 percent of Western Europeans. Why the difference? The McKinsey report explains language barriers in Europe have made migration from rural to urban areas somewhat slower on that continent. Also, various E.U. programs have “transferred funds from richer metropolitan regions in its member states to poor rural ones.” Government spending in Europe has helped limit urban migration.

Folks in the sticks think that cities suck off of them, but it tends to be the other way around.

Email ThisBlogThis!Share to TwitterShare to FacebookShare to Pinterest
Labels: Civil society, News in the Midwest