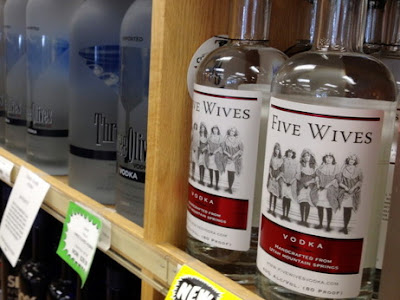 They're "five wives who just like to get together and have a cocktail."
They're not meant to be a direct reference to polygamy and those kittens they're holding in their laps are ... just part of a photograph that's reflective of the 1890s to early 1900s.
For all anyone knows, they might be lesbians.
Those are some of the things that Five Wives Vodka director of marketing Steve Conlin had to say this afternoon to All Things Considered co-host Robert Siegel about the news that the company's product has been banned in Idaho because its label and its name might offend Mormons and women.
Ironically, Five Wives Vodka is made — and sold — in Utah, home to The Church of Jesus Christ of Latter-Day Saints.
As The Salt Lake Tribune reported this week, "Idaho regulators have decided not to carry an Ogden distillery's Five Wives Vodka because of its label, while Utah booze cops have deemed acceptable the bottle's depiction of 19th century women in petticoats holding kittens near their lady parts."
"Products that we feel are marketed toward children, or are in poor taste with respect to out citizens will not be authorized for distribution," Idaho State Liquor Division Deputy Director Howard Wasserstein wrote in a letter to the Ogden distillery.

It amazes me that the vodka is sold in Utah, but not Idaho.  Of course, Idaho also has a pretty large Mormon population, so maybe they just aren't as saavy about avoiding making fools of themselves as their brethren in Utah.   Way to make the national news, morons.

Email ThisBlogThis!Share to TwitterShare to FacebookShare to Pinterest
Labels: Beer and other gifts from God, Idiots, Things I Don't Understand