Forwarded by my former employer, who received it from his sister/co-worker/calf head carrier (entertaining story): 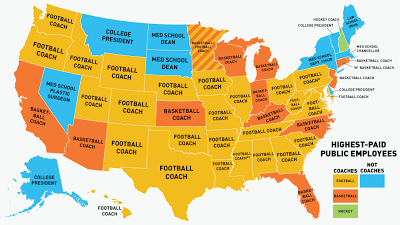 This reminds me of one of the brilliant pieces of legislation which the pre-Tea Party Tea Partier I ran against for state representative sponsored.  Apparently, she and the rocket scientists she was friends with in the legislature found out that some damn college professors had bigger salaries than the governor.  Well they couldn't stand for liberal intellectuals getting more tax money than they and the governor made, so they proposed legislation limiting the salaries of state employees to no more than what the governor's salary was.  It turns out that the state employees making more than the governor were mainly doctors at (OSU) University Hospital in Columbus, psychologists, and Business school professors at OSU School of Business (rich businessmen doing "public service").  However, the highest paid government employees were Jim Tressel, Thad Motta (or whoever was OSU basketball coach at the time) and I think Bob Huggins.  Now, rather than giving up on this stupidity, they proposed an amendment exempting football and basketball coaches.  Because, you know, paying coaches more than doctors makes a fuckload of sense (of course, we already make that call, but that is the "free market" making that call).

Also, gotta love that the highest paid government employee in Nevada is a fucking plastic surgeon.
Posted by A Farmer at 8:11 PM